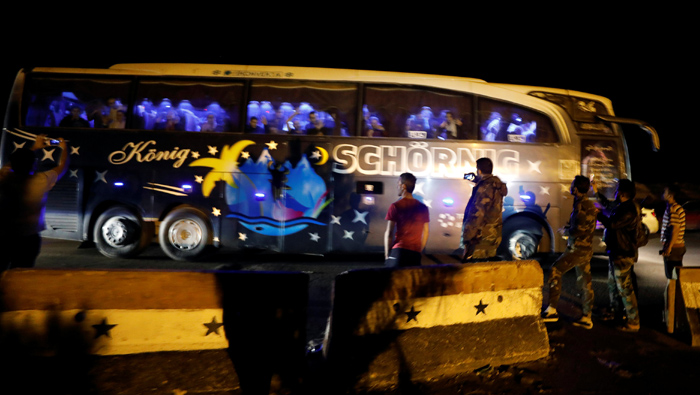 Beirut: Dozens of buses arrived in rebel-held northwestern Syria on Tuesday carrying Syrian insurgents who had agreed to surrender the town they controlled near Damascus after it was hit in a suspected chemical attack, a monitoring group said.
Their evacuation, along with their families, came as the United Nations Security Council prepared to meet later on Tuesday to discuss a suspected poison gas attack on Douma over the weekend.
Rebels blamed the government, which denies any involvement, and US President Donald Trump pledged to take swift action.
The UN chemical weapons watchdog has started an investigation.
The Syrian government's main ally, Russia, says the reports of the chemical attack are bogus.
Hundreds more people began to leave Douma on Tuesday and the pro-government Watan newspaper said about 40,000 militants and their families were due to leave in all, as the UN refugee agency voiced alarm at "spiralling new displacement".
The deal restores President Bashar Al Assad's control over the entire eastern Ghouta - formerly the biggest rebel bastion near Damascus.
Sixty-seven buses carrying hundreds of fighters, along with family members and other civilians who did not wish to come back under Assad's rule, reached opposition areas near Aleppo on Tuesday, the Syrian Observatory for Human Rights said.
RIA news agency quoted Russia's Defence Ministry as saying 3,600 militants and their families had left Douma over the past 24 hours.
As part of the surrender deal, the Jaish Al Islam group that controlled the town released scores of people it had been holding.
The deal took effect on Sunday, hours after medical aid groups reported the suspected chemical attack, saying it had killed dozens of people in Douma.
The government and its allies had been attacking the densely populated eastern Ghouta for seven weeks.
Thousands of fighters from other rebel groups, accompanied by tens of thousands of civilians, have already left for northwestern Syria after deals surrendering the Ghouta's other major towns.
The UN refugee agency UNHCR said around 130,000 people had fled eastern Ghouta over the past four weeks.
"Our particular concern is the situation in Douma ... where tens of thousands of civilians remain trapped," UNHCR spokesman Andrej Mahecic told a news briefing.
The recapture of eastern Ghouta represents Assad's biggest battlefield victory since late 2016, when he took back Aleppo, and underlines his unassailable position in the war.
Western countries have said Assad's assault on eastern Ghouta was a violation of a Security Council resolution calling for a complete ceasefire across Syria.
Damascus and Moscow said the groups controlling the area were not covered by the truce, and the offensive was needed to end the control of extremist insurgents over the area's large civilian population and to stop mortar attacks on the capital.
The United Nations is not party to the Douma surrender deal, in which the evacuees are going to an area around Jarablus and Al Bab in northern Syria controlled by Turkish-backed rebels.
Large numbers of people have also crossed into government-held territory rather than leaving along with rebels.
Some 45,000 displaced people are staying in eight collective shelters near Damascus, the UNHCR said, while roughly the same number have left the shelters after a screening process.
Medical teams at the shelters have reported skin disease and respiratory problems among children, said a spokesman for the UN children's agency, UNICEF.