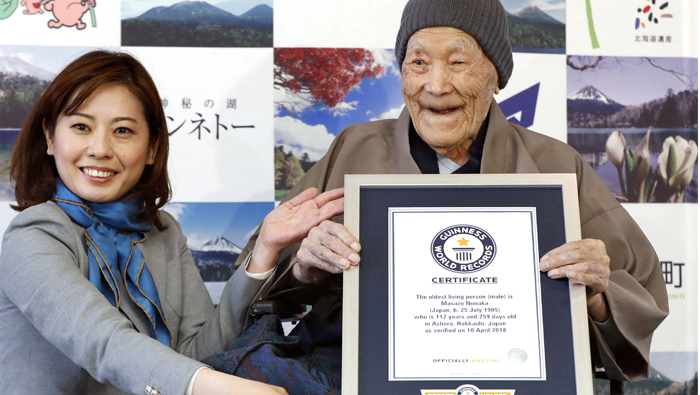 Ashoro (Japan): A 112-year-old Japanese man born months before Albert Einstein published his theory of special relativity was recognised on Tuesday as the world's oldest man.
Masazo Nonaka, born on July 25, 1905, took the title after Francisco Nunez Olivera of Spain died this year at the aged 113, Guinness World Records said.
A farmer and lumberjack in his youth, Nonaka later ran a hot spring inn in his hometown of Ashoro, on Hokkaido island, 900 km (560 miles) north of Tokyo, and raised two sons and three daughters.
Nonaka enjoys dipping in a spa and is fond of sweets, especially a strawberry sponge cake.
He was joined at an award ceremony on Tuesday by relatives and officials.
The Guinness World Records title for the oldest man who ever lived is held by another Japan man, Jiroemon Kimura, who died in 2013 at the age of 116 years and 54 days.
The greatest authenticated age for any human is 122 years, 164 days by Jeanne Louise Calment of France, who died in 1997.