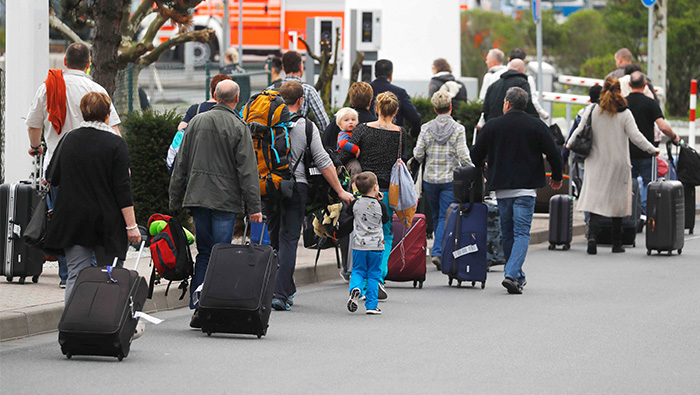 Berlin: Thousands of passengers were left stranded at German airports on Tuesday as more than 60,000 ground staff and other public sector workers staged walkouts across the country to increase the pressure in a pay dispute.
Lufthansa had said that it was cancelling more than 800 of its planned 1,600 flights on Tuesday and Frankfurt airport operator Fraport had warned of disruption.
As well as Frankfurt, Germany's busiest hub for airlines, airports in Munich, Cologne and Bremen were hit. The industrial action also affected nurseries, rubbish collection services and swimming pools in several German states.
German union Verdi wants a 6 per cent pay rise for its 2.3 million public sector employees at the federal and local level. Germany's federal government and municipalities have rejected that, saying such a rise would force them to outsource jobs.
The union said more than 60,000 workers in eight German states took part in the strikes, and further walkouts were planned across the country in coming days.
Some passengers expressed frustration over the delays.
"I’m upset. I’m affected by these strikes too often," said Roswitha Karl, who was at Frankfurt airport waiting to board a flight to Moldova for a holiday.
"First, there was the pilots' strike, then the ground staff and then the security staff, it's a matter of luck," said Karl.
Airline rebooking counters had a long queue of passengers, while other stranded travellers were waiting in the terminal. While some frantically tried to change their reservations, others took the delays in their stride.
Jana Glaeser had arrived in Frankfurt from Miami and her flight to Berlin was cancelled. "Now we’re getting a train ticket instead. Hopefully everything works out,” she said.
In western North Rhine-Westphalia, Germany's most populous state, local transport, public utilities and childcare centres were hit. There were long tailbacks on motorways, and in southern Baden-Wuerttemberg buses and local trains stayed in depots.
"We want to send a clear signal to employers with these massive strikes," said Frank Bsirske, head of Verdi, Germany's biggest labour union for service sector employees.
He said the union would escalate the dispute if employers did not present an offer next week. The third round of talks starts on April 15.
Germany, Europe's biggest economy, is in robust shape, with record tax revenues and a budget surplus. Rising employment, inflation-busting pay rises and low borrowing costs are fuelling a consumer-led upswing.
"If not now, when can we have significant increases for all workers, also in the public sector?" said Bsirske.
In the industrial sector, 3.9 million workers agreed on a pay and flexible working hours deal in February that amounted to a roughly 4 percent rise per year for 2018 and 2019. Inflation edged up to 1.5 percent in March.
The European Central Bank is keeping a close eye on the German wage negotiations for any sign that wage growth is picking up, potentially lifting inflation and allowing the ECB to start winding down its massive stimulus programme.
Neighbouring France has also faced industrial action in the last few weeks in protests against President Emmanuel Macron's planned reforms.