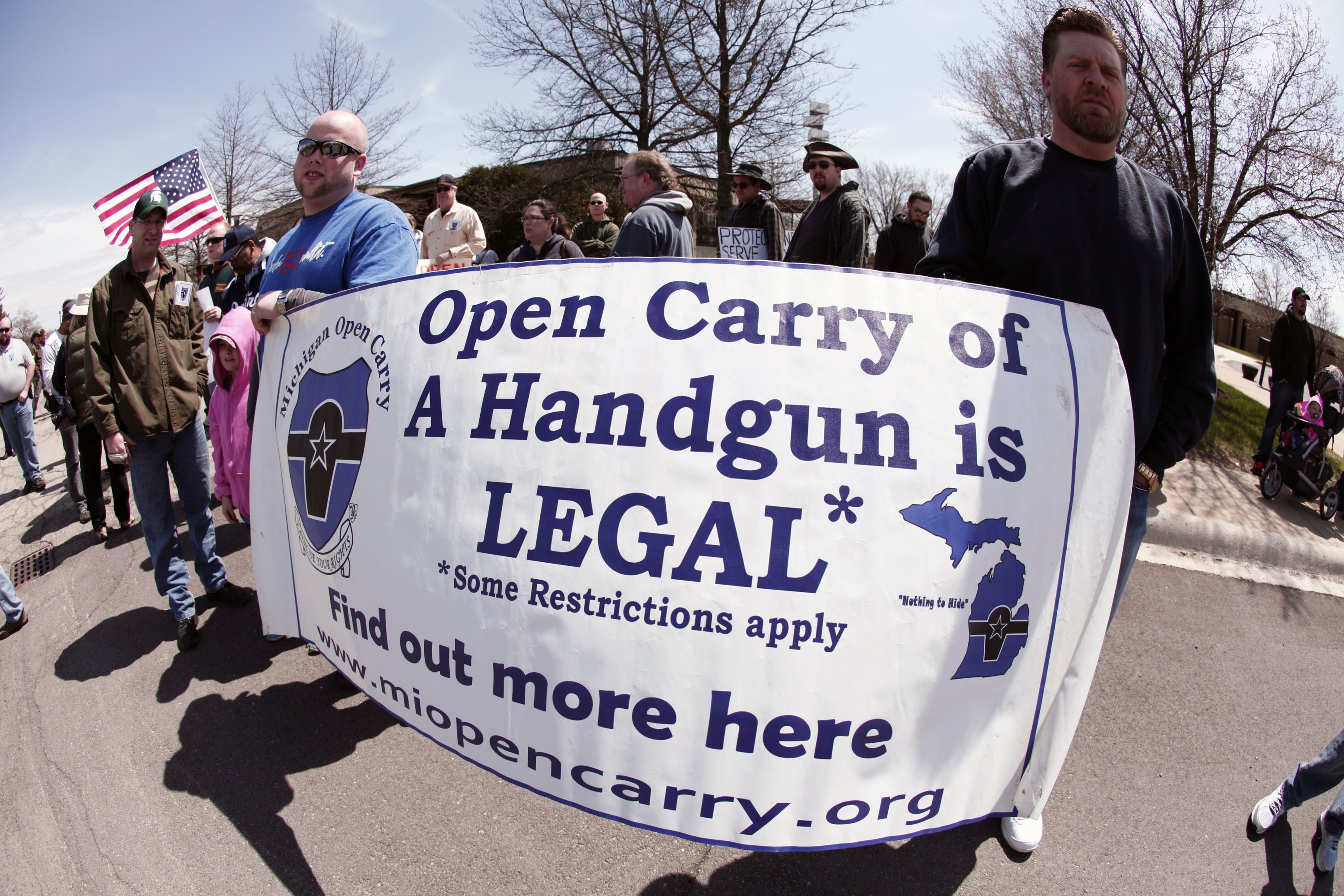 Beneath a photograph of an AR-15 with all the trimmings, an online petition calling for the open carry of firearms at the Republican National Convention in Cleveland in July (and possibly intended as parody) has acquired more than 40,000 signatures. USA Today reported that the petition is "of unknown origin." Because extreme gun culture excels at self-parody, it's dangerous to assume that the petition was written by a gun-control agitator. But the entire document appears designed to produce conflict within the GOP's trembling walls.
Like most states, Ohio doesn't restrict the carry of unconcealed, loaded firearms in public. This didn't much matter in the past, since it was universally understood that openly carrying a firearm in public was both bizarre and menacing behaviour guaranteed to attract law enforcement. But as avant garde gun culture has grown increasingly assertive, and increasingly protected by Republican politicians, open carry, like every other kind, has become a cause to rally around.
Limited, legitimate research suggests that carrying firearms doesn't increase public safety, and probably endangers it. Sometimes the downside of extremism is difficult to ignore. When a Colorado Springs resident made an emergency call about a man carrying a rifle down the street last fall, the 911 dispatcher correctly pointed out that Colorado allows such behavior right up until the moment that murders begin (as they soon did).
But for Republicans, whose precarious coalition is home to the extreme gun rights lobby, cognitive dissonance is just another cost of conducting politics on the fringe. The online petition seeks to force the party to live under the "guns everywhere" regime that conservative state legislators have imposed on millions of Americans while often exempting their own workplaces. (Guns in cafes, great; guns in legislative chambers, not so much.)
Cleveland, Ohio is consistently ranked as one of the top ten most dangerous cities in America. By forcing attendees to leave their firearms at home, the RNC and Quicken Loans Arena are putting tens of thousands of people at risk both inside and outside of the convention site.
This doesn't even begin to factor in the possibility of an IS terrorist attack on the arena during the convention. Without the right to protect themselves, those at the Quicken Loans Arena will be sitting ducks, utterly helpless against evil-doers, criminals or others who wish to threaten the American way of life.
The rhetoric sounds like National Rifle Association leader Wayne LaPierre on a calm day or perhaps a too-predictable parody on the "Daily Show." The elements are familiar: an existential threat posed by (majority-black) Cleveland; the terrified "sitting ducks;" the equation of regulation of firearms with threats to "the American way of life."
But it gets more pointed.
All three remaining Republican candidates have spoken out on the issue and are unified in their opposition to Barack Obama's "gun-free zones."
Ted Cruz, John Kasich and Donald Trump have indeed lamented the existence of gun-free zones. Now they're being called to account. To ensure safety at the convention, the petition states, "you must call upon the RNC to rectify this affront to our Second Amendment freedoms and insist upon a suspension of the Quicken Loans Arena's unconstitutional 'gun-free zone' loophole. Every American is endowed with a Constitutional right to carry a gun wherever and whenever they please."
After all, if guns everywhere make us safer, how can a gun-free political convention possibly be a good thing?
The party is no doubt counting on the US Secret Service to take the blame for prohibiting guns at the convention. So the gathering of embittered factions, including the Trumpistas who are poised to "riot" in the event their leader is denied, will almost surely attend the convention in their capacity as sitting ducks. For Republican leaders, that's a far better outcome than actually living up to their own gun-rights rhetoric. They'd much rather face sitting ducks in the hall than armed chickens come home to roost. - Bloomberg View