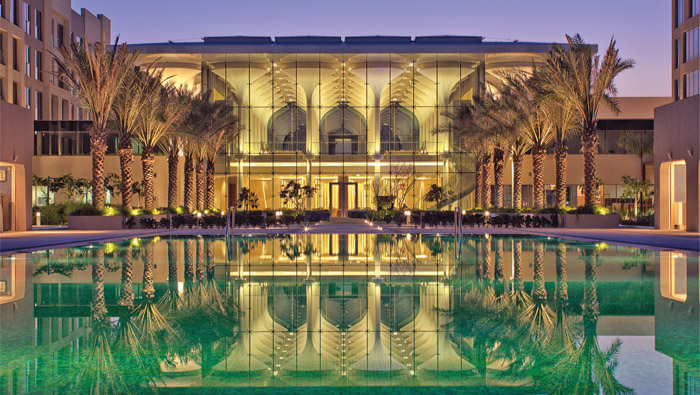 Muscat: Kempinski Hotel Muscat officially opened its doors on Wednesday in Al Mouj, under the patronage of His Highness Sayyid Taimour bin Asa’ad bin Tariq Al Said, and the Board of Directors of Omani Hospitality Company SAOC.
“Despite the challenges faced by the project, we are very pleased to be standing here and announcing the launch of the hotel, which is a significant addition to the tourism sector in the Sultanate, and a testament to the shareholders’ commitment to diversifying the national economy and sources of income,” said Sheikh Rashid Al Saadi, Chairman of Omani Hospitality Company SAOC.
Carsten Wiegandt, General Manager of Kempinski Hotel Muscat added, “The grand opening of our hotel marks an important day for the Kempinski brand.
“Being the latest hotel addition in Al Mouj Muscat, we aim to provide our guests with a memorable authentic Omani experience, merged with over 120 years of European luxury, while contributing to the successful growth of the tourism sector in the Sultanate.”
Designed by Woods Bagot, a worldwide architectural firm, Kempinski Hotel Muscat is a modern interpretation of Muscat and the Sultanate, with stand-out elements that are truly Omani in nature. The hotel’s buildings, with the facade inspired by the landscape of Old Muscat – the Muttrah Corniche – are a matrix of structures outlining what was once a commercial centre.
The design of the lobby originates from the nature of lilies in a lily pond, and is inspired by the Al Alam Palace, the ceremonial palace of His Majesty Sultan Qaboos. The prominent location of the ballroom establishes a strong first impression, with an architectural design inspired by Arabic lanterns, illuminated in the evening to reinforce the hotel as a landmark in Al Mouj Muscat community.
With 310 rooms and suites, 10 world-class restaurants, state-of-the-art meeting facilities, a fully equipped health club and an authentic spa experience, the five-star Kempinski is one of the hotels in the Al Mouj tourism complex, and caters to tourists from both abroad and the Sultanate. For families travelling with children, the hotel’s kids club provides the perfect haven for children.
Also, the 1,100 square metre pillarless ballroom can accommodate up to 700 guests and be divided into three sections. The striking diamond-shaped building also hosts 11 separate function rooms, featuring natural daylight and conveniently equipped with state-of-the-art audiovisual equipment.
The Kempinski hotel is located in the tourist friendly neighbourhood of Al Mouj, which welcomes up to 10,000 visitors everyday at its iconic ‘The Walk’. Wiegandt believes that the location and facilities of the hotel will prove to be ‘a game changer’ in the hospitality industry in the Sultanate.