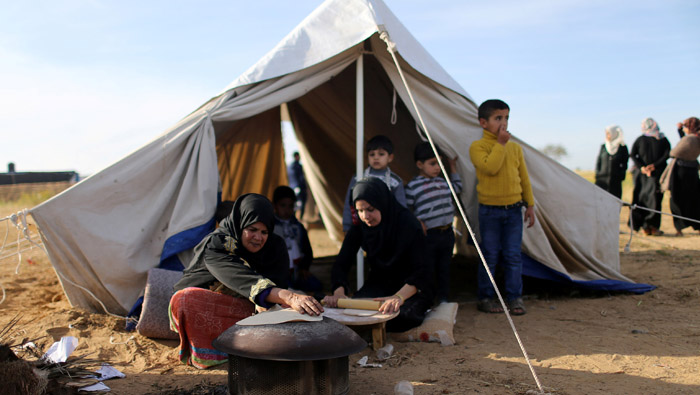 Gaza Border: Several thousand Palestinians remained in tent camps along the Gaza border on Monday, continuing their protest for a right of return for refugees and their descendants to what is now Israel even after 16 demonstrators were killed by Israeli troops.
The numbers were far smaller than at the peak of the demonstration over the weekend, which saw the worst violence in Gaza since the 2014 war between Israel and Hamas.
Many protesters on Monday stayed back a safe distance, wary of Israeli soldiers who remained in position on the other side of the barrier. The Israeli military said some of those who were shot on Friday, the first day of the protest, had fired at soldiers, rolled burning tyres and hurled rocks and fire bombs toward the border.
Hamas said five of the dead were members of its armed wing. Israel said eight of the 15 killed on Friday belonged to Hamas, and two to other militant factions. However, Hamas denied that its fighters had fired on Israeli forces, using the crowds as cover.
On Monday, the Palestinian death toll rose to 16, after Palestinian medical officials said that a 29-year-old man died of wounds he suffered on Friday. Gaza health officials said 12 people were wounded by Israeli fire on Monday and a military spokeswoman said she was checking the details. Those who have stayed in the camps seemed to have divided into three groups.
One, mostly youths, sometimes pushed to within a few dozen metres of the fence to hurl rocks at Israeli soldiers, who fired live and rubber bullets, and teargas canisters. Others watched the stone-throwers from a distance.
A third group stayed further back, sitting in and around the tents about 700 metres from the frontier. The mood there was calmer, with people snapping selfies and sharing stories about the protest while vendors sell ice cream, cigarettes and sandwiches.
Gaza is home to 2 million Palestinians, the majority of them refugees. The protest, known as the "Great March of Return" is intended to culminate on May 15. That is the day that Palestinians mark the 70th anniversary of the "Nakba" or "Catastrophe" when hundreds of thousands of Palestinians fled or were driven out of their homes amid violence culminating in war between the newly created State of Israel and its Arab neighbours in May 1948.
At one protest site on Monday, Medhat Basal brought seven of his grandchildren to a hilltop to look out over the border toward the town where his parents lived before 1948.
Basal, 69, said his mother gave birth to him while she was fleeing to Gaza from the family home in Beersheba, which is today an Israeli city which lies 25 miles (40 km) from the Gaza border.
"If I don't make it to Beersheba, one of my grandchildren may do," Basal said. Israel has long ruled out any right of return for the refugees, fearing that it would lose its Jewish majority.
Last week's deaths prompted UN Secretary-General Antonio Guterres and the European Union’s top diplomat, Federica Mogherini, to call for an independent investigation.
A spokesman for Israeli Prime Minister Benjamin Netanyahu accused Hamas which controls Gaza, of sending "children to war zones". Hamas rejected Israeli accusations as "lies aimed to justify Friday's massacre". Avigdor Lieberman, the Israeli defence minister, said its soldiers did what was necessary to protect Israel's border.