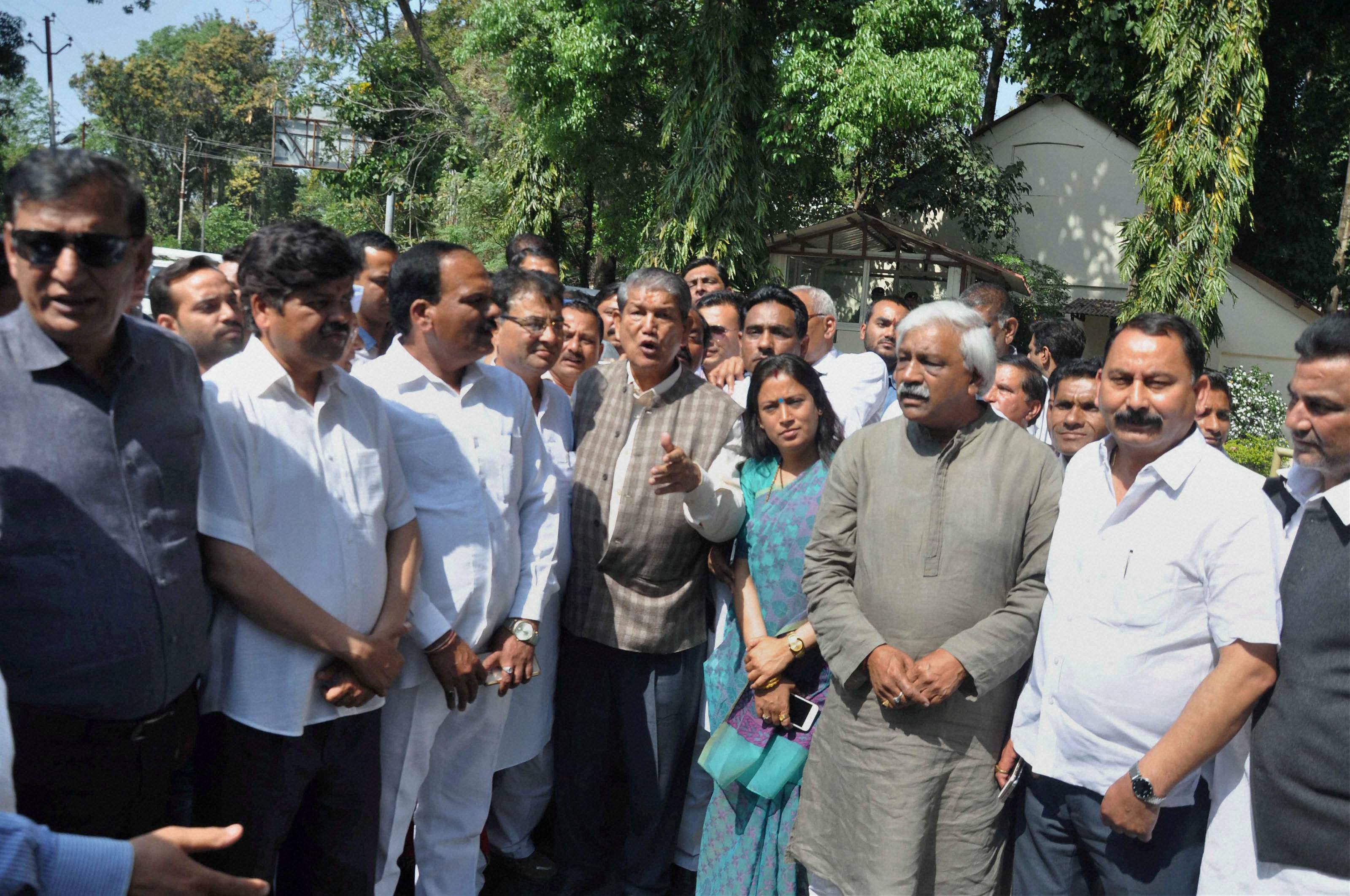 Dehradun/New Delhi: Dislodged Uttarakhand Chief Minister Harish Rawat on Monday mounted a legal challenge to the imposition of President’s rule and demanded its revocation as Congress sparred with BJP accusing the Centre of toppling its government ahead of a floor test in the Assembly.
Describing the decision as a "brazen display of high-handedness and authoritarianism", Rawat filed a petition in the Uttarakhand High Court seeking quashing of the Presidential proclamation.
However, Union Finance Minister Arun Jaitley put the blame squarely on the Congress for the "Constitutional crisis" in the state and accused the Speaker of declaring as passed a "defeated" appropriation bill and then failing to certify the "falsehood".
"This leaves the state without any approved financial expenditure with effect from 1st April, 2015," he wrote in a "Facebook" blog titled "A State without a Budget".
Rawat's petition came up before the single bench of Justice U. C. Dhyani, who after hearing both sides for close to four hours, said the matter would be taken up again on Tuesday.
"Invocation of Art 356 of the Constitution in Uttarakhand is absolutely illegal, arbitrary and malafide and therefore its invocation should be quashed and Harish Rawat government restored," senior Supreme Court counsel Abhishek Manu Sanghvi contended before the petition.
Questioning the timing of the move, Singhvi said it was meant to sabotage the Constitutional process.
On the ground, Rawat made a show of strength before Governor K. K. Paul when he led a march of 34 MLAs owing allegiance to him and claimed he had the numbers to prove his majority.
He sought Governor's permission to prove his majority in the Assembly.
MLAs who went along with Rawat included 26 of the Congress, five of the Progressive Democratic Front (PDF) and one nominated member of the state Assembly.
A letter claiming support of 34 MLAs was also handed over to the Governor.
Govind Singh Kunjwal, the Speaker of the state Assembly, which is now in suspended animation, was not part of the MLAs who met the Governor while PDF member Sarbat Karim Ansari was absent due to personal reasons.
"Congress still enjoys a majority in the state Assembly and it should have been given an opportunity to prove this on the floor of the House," Congress MLA Indira Hridayesh told reporters soon after meeting the Governor.
"We have the support of 34 MLAs and we are in a majority. We have given this information to the Governor," she said.
Nine party rebels, who had revolted against the Rawat government were disqualified by Speaker on Sunday, reducing the effective strength of the House to 61 from 70.
Another party MLA Nav Prabhat said a memorandum was also handed to the Governor to counter BJP's allegations that the appropriation bill had not been passed by the state assembly.
"The appropriation bill on the state's annual budget has been passed as per Parliamentary norms and there is no financial emergency in the state as alleged by the BJP," Prabhat told reporters quoting the memorandum.
Meanwhile, Congress leader and party spokesman Manish Tewari accused the Centre of "murdering democracy" by imposing President's rule in a second Congress-ruled state within two months.
"I would like to point out that when the Governor had given time to chief minister for a floor test, when every decision of Supreme Court on (SR) Bommai says that a floor test is the only way to test the majority of a government, why did the prime minister and his Cabinet unceremoniously, almost through a coup, topple the government in Uttarakhand?" he asked.
He refused to be drawn into judging President Pranab Mukherjee's decision to approve the NDA government's recommendation to impose Central Rule in Uttarakhand, saying it should be left to "his wisdom".