China, Vietnam call for maritime disputes to be settled through talks 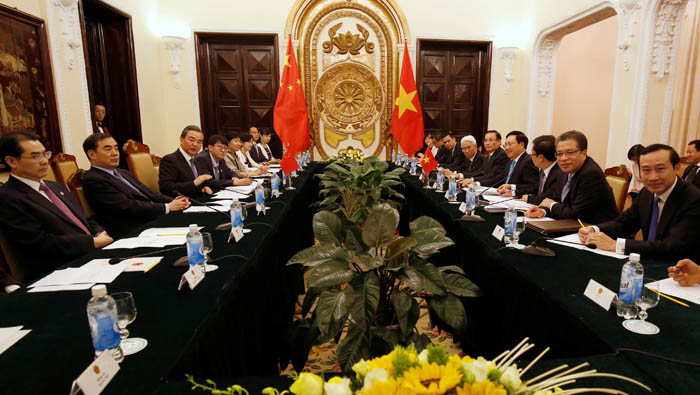 Hanoi: Chinese Foreign Minister Wang Yi said on Sunday China and Vietnam should settle their disputes in the South China Sea through talks and move to jointly exploit its waters.
"We have agreed that settling the maritime issues is extremely important for the healthy and sustainable development of bilateral relations," he told reporters after a meeting with Vietnamese Foreign Minister and Deputy Prime Minister Pham Binh Minh in Hanoi.
China claims 90 per cent of the potentially energy-rich maritime territory and has been building on and militarising rocky outcrops and reefs in its waters.
Brunei, Malaysia, the Philippines, Taiwan and Vietnam also lay claim to parts of it, through which about $5 trillion of trade passes each year. Vietnam is the country most openly at odds with China over the issue.
"The two sides should better manage disputes through talks and refrain from taking unilateral actions that may further complicate and expand the disputes," Wang said.
"At the same time, (the two sides) should promote cooperation at the sea, including holding talks on joint exploitation." Wang and Minh said bilateral relations had seen positive development, with rising trade and investment as the two neighbours further opened up markets to each other.
Bilateral trade exceeded $100 billion last year.
Minh said Vietnam and China shared responsibility to maintain peace and stability in the region, reiterating Vietnam's stance that the maritime disputes must be resolved peacefully manner and according to international law.