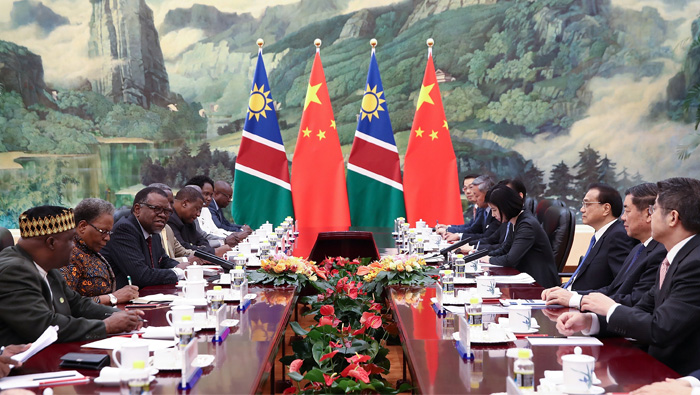 Beijing: Namibia President Hage Geingob said China is not colonising Africa and that growing cooperation between the world's No. 2 economy and Africa benefits both sides, China's official Xinhua News Agency reported on Saturday.
The report said Geingob, currently on a state visit to China, said "comments smearing bilateral cooperation" between China and Namibia are "doomed to fail."
"We are mature, we can choose our friends, we can choose what we want for, and what's good for us," Geingob said.
Africa has been a region of focus for Beijing's quest for greater global influence, with billions of dollars being pumped into infrastructure projects in the continent.
Some critics have questioned China's motives, however, accusing it of seeking to secure key raw materials such as oil and minerals.
In March, then-US Secretary of State Rex Tillerson warned African countries should be careful not to forfeit their sovereignty when they accept loans from China.
He said at that time that if an African government "gets into trouble" after accepting a Chinese loan they could lose control of its infrastructure or resources throug default.
China has repeatedly rejected accusations that it is only only interested in Africa for its mineral resources and said its no-strings-attached aid programmes are widely welcomed.
Geingob also told Xinhua that China-Africa cooperation is on equal footing and that China's investment in his country is not just "digging out resources."
"No country in the world has added so much value to our products as China has. China has done a lot of technology transfer and job creation," the Namibian president told Xinhua.