Mexican front-runner Obrador to campaign by US border 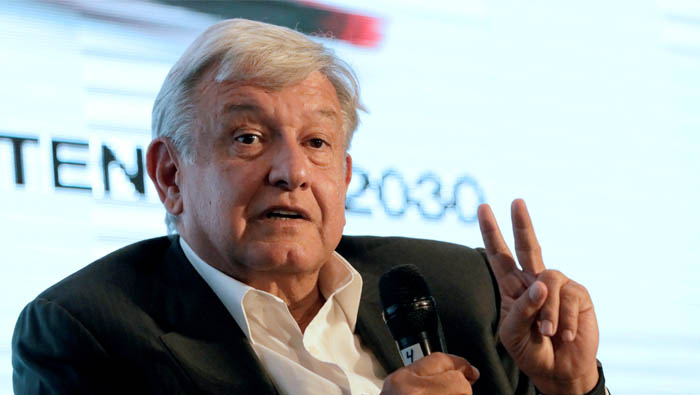 Ciudad Juarez (Mexico): Mexico's presidential front-runner launches his campaign close to the US border on Sunday amid tension over US President Donald Trump's plan to put up a wall between the countries.
If leftist Andres Manuel Lopez Obrador wins the July 1 election, he is expected to be less accommodating towards Trump than the ruling Institutional Revolutionary Party (PRI), which has been lagging in polls because of anger over its failure to contain violence and graft.
His three-month campaign starts in Ciudad Juarez, a tribute to the city's namesake Benito Juarez, the 19th century Mexican president from indigenous roots whose exiled government resisted a French colonialist intervention from the unruly border city.
Lopez Obrador recently criticised President Enrique Pena Nieto for "governing with recipes sent from abroad," but he has lately softened his opposition to the government's policy of allowing foreign investment in the oil industry.
The ruling party candidate trailing in third place, former finance minister Jose Antonio Meade, launches his own campaign on Sunday at the other end of the country in the southeastern town of Merida.
Second-place Ricardo Anaya began campaigning on Friday. Silver-haired leftist Lopez Obrador, a former Mexico City mayor, first ran for president in 2006.
He would seek a meeting with Trump "as soon as possible" a senior advisor said, while indicating foreign policy would hew less closely to US regional priorities if he wins.
Trump's tough trade policies, insults against Mexican migrants and demands for the border wall have angered ordinary Mexicans who see their country as a natural ally of the United States.
Lopez Obrador has made clear US-Mexican relations will remain strong if he wins, while promising to throw Trump a "curve ball" and defend Mexican pride.
His unconventional, and at times inconsistent, policy stances have sometimes led to comparisons with the US president.
He supports the North American Free Trade Agreement (NAFTA) with Canada and the United States, but has called for talks started by Trump to renegotiate the deal to be suspended until after the election.
In a possible sign of the moderation Lopez Obrador is keen to project, Ciudad Juarez also harboured another of his heroes -- Francisco I. Madero, a wealthy, US-educated, moderate leader of the Mexican revolution who tried to unite conservatives and radicals.
However, the 64-year-old continues to play to his leftist base, attacking the current government over a $13 billion airport project he says is tainted by corruption.
He has promised to "consult the people" on reforms and plans to turn the presidential residence into a cultural center, sell the presidential plane and cut his salary in half.
The candidate's foreign policy advisor, Hector Vasconcelos, has said US relations should be aimed at bolstering economic cooperation and that the current ties over-emphasise police and military relations.
Vasconcelos also said Mexico would not follow the United States in sanctioning socialist Venezuela, and would refrain from foreign interference to focus on critical problems at home such as violence.
As well as its storied history, in modern times Ciudad Juarez, opposite El Paso in Texas, has been the scene of the murders of hundreds of women, many of them low-salaried workers in export factories. That horror, mirrored in towns across Mexico during a decade of extreme drug violence, is another reason Lopez Obrador chose the city to start campaigning, an advisor said.
"It is a symbol of the need to heal Mexican pain," said senior campaign member Tatiana Clouthier. Angel Perez, 29, a Mexican national who lives in El Paso, said he would attend Sunday's campaign launch with his wife and two daughters, hopeful that Lopez Obrador will deliver on promises for change.
"I think he has what it takes to put Trump in his place," he said.