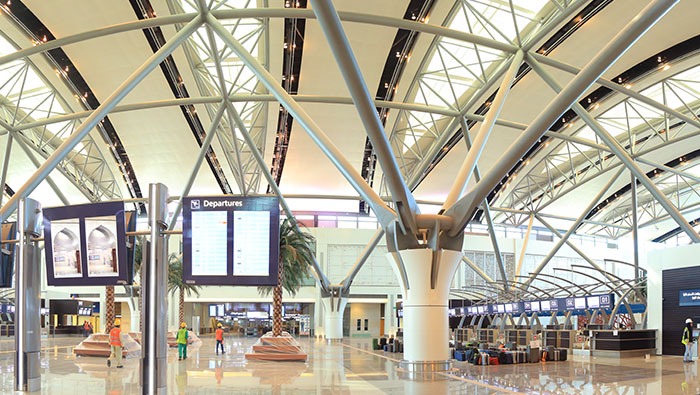 The development of a country is often measured by the infrastructural facilities it has to provide to residents, as well as tourists. This measure of judgement, needless to say, begins at the airport. The old airport was a small, cosy space that people had gotten used to. It had limited area and limited facilities but it certainly felt like home, nonetheless.

Then, with the advent of the economic diversification plan, wherein the entire country prepared to shift its absolute dependence on oil as a revenue source to other sources, including logistics and tourism, a project that was in the pipeline was fast-tracked. And that project was the much-awaited and much-talked-about new Muscat International Airport.

The new airport is a study in contrast to the old one. Aimed at promoting active tourism and hosting more people and more destinations, the new airport is massive in size and extravagance.
As of now, after the completion of phase I, the airport has a capacity of 20 million passengers and accommodates the world’s largest aircraft, Airbus 380. The terminals have been built with state-of-the-art facilities, with utmost attention to details.

In order to facilitate convenience, the new airport has adopted a progressive level of automation and digitisation. For instance, unlike the old airport, the baggage handling system at the new airport will be fully automated. There are also a number of self-service check-in kiosks installed near the check-in counters. Also, two new mobile applications will provide both information and entertainment.

The authorities have attempted to overcome all shortcomings of the old airport. One issue that most people using the old airport complained of was the long turnaround time due to the distance between the airport and the aircraft. It would take nearly 20-30 extra minutes to get to the flight from the airport using the airbus. Now, that problem has been solved as the new airport will have boarding bridges, which get passengers from the airport to the aircraft directly.

Over the last few years, utmost importance has been given to public opinion and feedback. And this was made an important part of the preparation and readiness process of the airport as well. The #JoinTheTrials campaign was launched as a part of this. It involved participation of the public in order to ensure that every system and process functioned flawlessly.
“There were four main components: systems, the actual building, procedures, and familiarity of the staff. Trials were about bringing these four components together to get an airport operation simulation as close to reality as possible,” Pablo Lorenz, the trials manager, said.

Every employee in every organisation needs to know his/her role, be familiar with the building and facilities, and, of course, understand the safety features and procedures completely. Displays must show the right information, signs point to the right place, and all systems be active. Passengers must arrive and depart smoothly, aircraft must depart on time, and assistance must be available for those with reduced mobility or other special needs. Most of all, every safety and security process, from hygiene operations to sniffer dogs, must be perfect, according to the airport website.

“We can design the best processes in the world but they need to work for the passengers. Ultimately, we are building it for them and that’s whom we are serving. That’s why, it is really important for us to get feedback from passengers,” he said.

“The trials were not about technical tests, which are completed well before we invite the public to participate. This is about the smooth execution of processes. Every stakeholder, from transport to fire services, needs to check his/her processes in a real experience with customers who will not know their way around, just like on the first day. Different scenarios were planned and played out to ensure that the real world issues of an airport are applied,” Lorenz added.

The basic trials started in September last year and a number of them have been conducted since then, in which more than 17,000 members of the public, including men, women, and children, participated.

The new 580,000sq.m. airport, which has five levels, is a giant leap from the existing airport, in size and technology to digitisation. What makes it unique and endearing, however, is the fact it is still a very friendly airport. “It is an airport that you can get familiar with and feel very comfortable in. It has a very friendly, a very Omani feel to it,” he said.

After multiple runs, re-runs, trials, tests, practices, and preparations, the airport will finally open its doors to the public on March 20. “Our vision and mission is to be among the top 20 airports by 2020. This facility will help us get into that league. We have all the right ingredients for this and I am confident that we are on the right journey to achieve this vision,” Lorenz concluded.