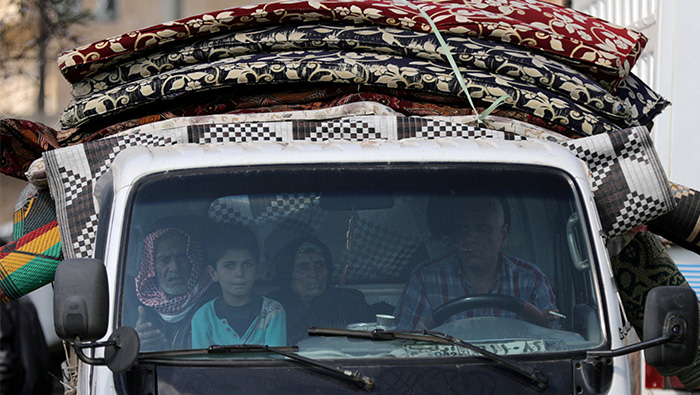 Beirut: The International Committee of the Red Cross (ICRC) in Syria said a convoy of 25 aid trucks entered the northern pocket of Syria's besieged eastern Ghouta on Thursday.
The Syrian Arab Red Crescent (SARC) told Reuters around 340 tonnes of food aid had entered eastern Ghouta in a convoy in cooperation with the ICRC and the United Nations.
ICRC's spokeswoman Iolanda Jaquemet said the convoy contained enough food aid for 26,100 people for one month, among other items.
What was the Syrian opposition's largest piece of territory near the capital Damascus has been split into three encircled pockets by a government offensive that began nearly a month ago.
The aid convoy will head for the town of Douma in the northern pocket, controlled by a rebel faction.
It contains 5,220 ICRC food parcels and 5,220 WFP flour bags, Jaquemet said. A parcel can feed a family of five for one month.
Russia said it expected at least 100 civilians to leave eastern Ghouta, where it daily declares a five-hour ceasefire, on Thursday, Interfax news agency reported.
This would be the third successive day on which small groups of civilians have left.
Citing the Centre for Reconciliation in Syria, a body run by Russia's defence ministry, Interfax said eastern Ghouta would receive 137 tonnes of food as humanitarian aid.
The Syrian Observatory for Human Rights said overnight dozens of air strikes hit the southern pocket of eastern Ghouta, controlled by another rebel faction.
Moscow and Damascus say their forces only target armed militants and seek to stop mortar attacks by insurgents that killed dozens of people in the capital. They accuse the rebels of using civilians as human shields, which the fighters deny.