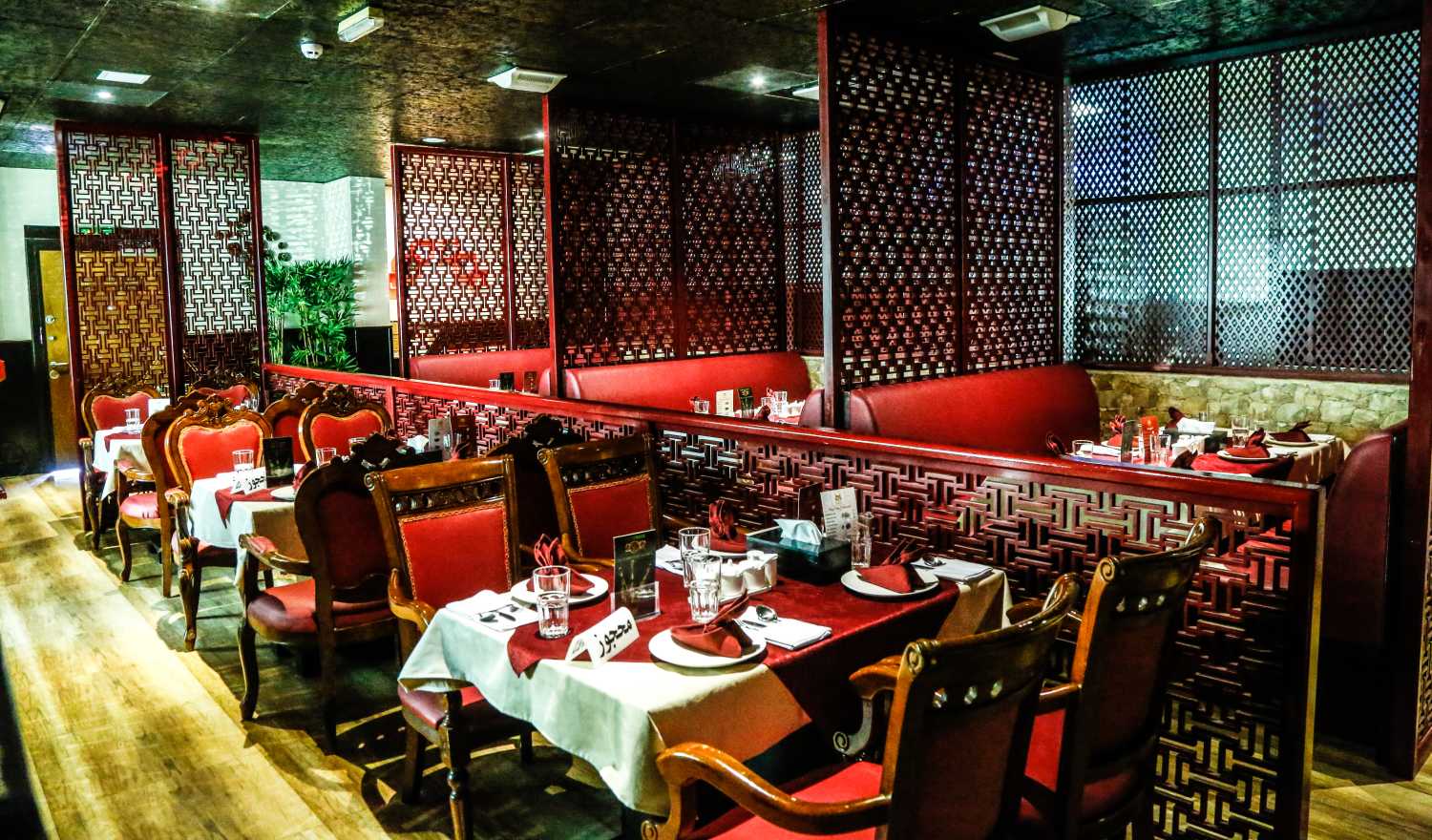 The newly opened Shanghai Kitchen at Azaiba, with its array of exotic Chinese food, carefully selected dishes, oriental ambience, and serene lighting, seems to be just what the doctor ordered.
As it was Women’s Day, we were welcomed with a pretty rose and a refreshing mocktail called “The Hanoi Fling”. It was love at first sip for our taste buds. The drink was a creamy mélange of orange, pineapple, and mango juice with ice cream, and a pretty little rose carved out of strawberry adorned the rim. The Shanghai special mocktail had a gorgeous swan carved out of an apple and strawberry perched on it. It was a refreshing, heavenly medley of pineapple juice, crushed strawberry, grenadine with lime juice, and mint. What a welcome!

The Shanghai Kitchen has a lot to offer on their menu, from soups and wontons to wok dishes, and much more. The wide choice of tasty dishes is appropriately complemented by a range of carefully crafted mixtures of cocktails and mocktails.
**media[840845]**
Stir-frying is the soul of Chinese cooking. Delicate juliennes of vegetables and diced meat are cooked in various sauces and spices and tossed in a wok to cook quickly on a high flame. The aromas, tastes, and juices have to be intact. This requires skill, knowledge, and expertise and that’s what the team of Shanghai Kitchen has in abundance.

We also tried Prawn Hargao, which were steamed dim sums stuffed with prawns and water chestnuts. The dip of black pepper and green chilli sauce accompanying it was delectable. The dim sums were cotton soft and melted in the mouth. The vegetable dumplings were delicious as well. We were also served Veg Spring Rolls. These were beautifully plated and presented in shot glasses. The rolls were crisp and dunked in a sweet chilli sauce that was finger-licking good.
**media[840843]**
Crispy Vegetables, a standard order at every Chinese restaurant, were presented with a twist here. The veggies comprised crispy fried fritters of eggplant, potato, button mushrooms, carrots, cauliflower, and baby corn. They were coated in a sweet plum sauce with chillies and we devoured them with relish. They surely had a wow factor, thanks to the amazing plum sauce.

We also tried the delightful chicken with pepper and ginger, which was deep fried diced chicken accompanied with bell peppers with flavours of ginger and crushed black pepper and coated with a combination of soya, dark soya, and oyster sauce.

One of our favourite starters was the Drums of Heaven, Shandong style. Crispy fried chicken wings had the exquisite signature of star anise and five-spice powder, making it delectable to the core. Shandong cuisine, also known as Jinan cuisine, has a wide selection of ingredients with a very strong aroma and the abundant presence of five-spice powder.

Another noteworthy starter was the delicious Yueyang Barbecued Fish. The soft fish fillets glazed in hoisin sauce with a smoky finish of barbecue were to die for. For seafood lovers, this is a must-order appetiser.
**media[840844]**
Legendary Dynamite Prawns, Shanghai Kitchen’s signature dish, had the superb twist of wasabi sauce. The prawns remained crisp till the last bite, were beautifully flavoured with mayo, and had the right kick of sriracha to them. The prawns tempura or battered and fried shrimps served on a stick and on a bed of fried glass noodles was good as well and neatly balanced, flavour wise. Again, the presentation left no stone unturned. Hunan style prawns, fried prawns tossed in a mix of chilli oil, sliced ginger, dry red chilli, onion, and oyster sauce, was good as well.

Just when we thought we couldn’t eat anymore after all these delicious starters, we were served exotic vegetables in a chilli basil sauce, Tsing Hoi chicken with cashew nuts, General Tao’s chicken, fish in orange peel sauce, Hakka noodles, prawns with seasonal greens and garlic, whole crab pepper garlic dry, and ginger and bell pepper fried rice. All of these were well plated and flavoursome.

General Tao’s chicken was sweet and spicy diced chicken cooked in oyster sauce with an overload of crushed peanuts — an absolute stunner. Fish in orange peel sauce was exotic and just one bite transported us back to the time when flavours and spices were rustic and delicately used. In fact, delectable was a mild word for it. Prawns in seasonal veggies such as bok choy and Chinese cabbage were delicious. Whole crab pepper garlic dry was a real eye catcher and extremely tasty, though a bit messy to eat.
**media[840841]**
Now one cannot end a meal without dessert. We had mango pudding, which was similar to panna cotta cooked in thick cream. It was very tasty but for a die-hard chocoholic, the sizzling brownie with hot chocolate sauce and vanilla ice cream was obviously the winner.

A tantalising mix of freshly procured, hand-picked, and directly sourced authentic spices, sauces and other key ingredients made all the dishes inspiring. The prices were very affordable, though the chefs and a team of talented culinary experts created some of the most exotic Chinese delicacies. Shanghai Kitchen leaves an indelible impression on one’s tongue and mind. Try this new restaurant in town and you will be left asking for more.