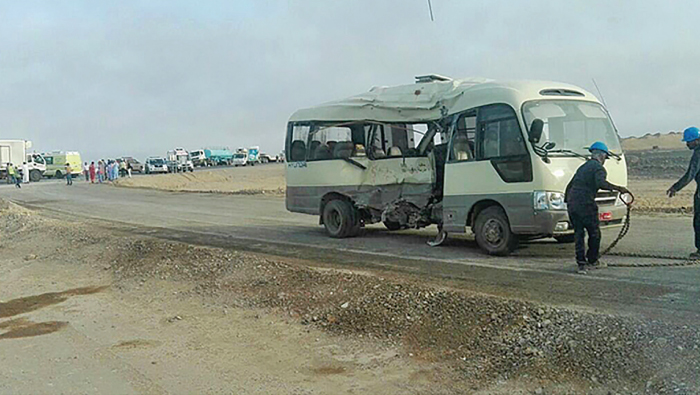 Muscat: A bus accident in Adam on Tuesday resulted in the death of one student and left 12 others injured.
This is the second school bus accident in less than ten days, and has caused concern across the Sultanate. “The lives of the future of Oman is not a joke,” said Ali Al Barwani, CEO of Oman Road Safety Association.
“This is a wakeup call to reorganise road safety for school bus drivers,” he added.
According to authorities, the accident involved a school bus and a truck. The children travelling in the bus were students of Adam School and the Usama Bin Zaid School, and were enrolled in grades 5 through 12.
Commenting on the accident, Ahmed Al Hadrami, Shura Council member from Nizwa said, “Sadly, this issue is very worrying, especially since the first accident and the second one happened a few days apart.”
Al Hadrami added, “I think that the safety measures, especially for school bus drivers, must be deeply taken into account.
“Firstly, it is important to consider whether the safety precautions in the school buses are suitable. Secondly, the Ministry of Education must review the capacity of buses and compare it to the number of children in the buses. “If the people in charge do not do anything regarding the safety of our children, then we are sending the wrong message to them. It is our responsibility to ensure we drive safely around school buses, as well,” added Al Hadrami.
The number of children going to school has been increasing, according to government data, “We have over half a million children all over Oman, and those kids rely on buses as their main form on commuting to and from schools, and so we at Oman’s Road Safety Association (ORSA) believe that there should be special training for school bus drivers,” Al Barwani said.
The time has come to establish a program for anyone who plans to be a school bus driver, to give them complete, comprehensive, and specific training on the safety operation of school buses.
“We should also ensure that each course is unique to the area. For instance, in Muscat they should be taught about driving between houses, while in A’Dhakiliyah the should learn about driving on the roads and mountains there,” Al Barwani added.
ORSA has begun a “Safe to School, Safe to Home” campaign, in hopes of raising awareness and making changes regarding school bus safety.
“ I hope that the Ministry of Education will consider making it mandatory for all school bus drivers to pass the course. This should also include the supervisors in the bus, the bus drivers, and the bus, itself,” Al Barwani said.
Selecting the appropriate drivers can be significant in ensuring the safety of students. Al Hadrami stated that “the issue is that many of the drivers are young men, who at times don’t follow road safety regulations, such as using their phones.”
The new road safety regulations, which have been followed since March 1, state that if an individual uses their phone while driving, they will receive a black point and be fined OMR 15.
“Schools should clearly state in the contract of bus drivers that they should by no means use a mobile phone. A condition should also state that the individual should expect a fine and a suspension,” Al Barwani added.
Students from the accident in Adam were transported to Nizwa hospital, where authorities from the hospital confirmed that “the number of cases that have reached us so far is nine, with 1 being a Green case, 6 Yellow cases, 1 Red and 1 Black case.”