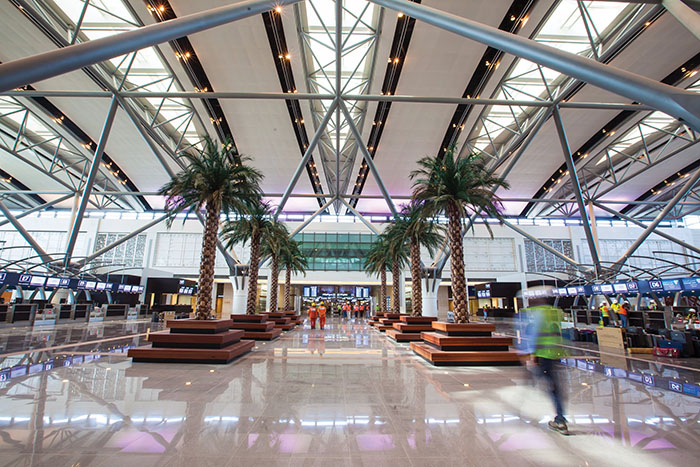 Muscat: Residents and citizens are eagerly awaiting the opening of Oman’s new airport, set for March 20.
The new airport will provide the Sultanate with the ability to act as a hub for tourism, transportation and business in the region, with its state-of-the-art facilities providing it with a much larger advantage over Muscat’s current aviation facilities.
“I have seen the airport being built over the years and, like me, I am sure there are many others who are also eagerly waiting to see it open,” said Ramanuj Venkatesh, a long-time Indian resident in Oman. “There is a certain pride you get when you see Oman get a new airport, and I honestly have to say, it is so cool to be seeing this.”
“Oman is currently looking to expand its business potential, and I think having a building like this is going to really impress quite a few people,” he added. “A bigger airport with more facilities means more happy visitors, and that’s what you want to see.”
Business aside, one of the main drivers of Oman’s future non-oil economy is tourism, and a larger airport with more facilities for aircraft services and repairs will provide an incentive for more people and airlines to travel to Oman.
“I was recently at the new airport in Salalah, and it looks stunning,” said Malcolm Samuel. “It may not be a very big airport, but is really modern, and there were many airlines I’d not even previously heard of flying directly into Salalah, so that shows you the potential of having such nice and modern facilities. Imagine the number of tourists we will get when the new airport in Muscat also has these awesome facilities.
“If you have good facilities, it automatically makes people want to come here. Flights that land in Oman arrive at the new airport. Then we were taken in a bus to the old terminal for our visa processing, but I think, in a way, this only increases our excitement of using the new airport,” he added.
Mohammed Al Shaqsi, an Omani national, added, “Oman is a country with such limitless potential, in terms of its natural beauty, heritage, culture and friendliness, and the government is currently trying to open up the country to more investors and tourists because they know that this is the way forward. This new airport is a very strong symbol of that and it represents the way forward.
“There are many who say that Oman is slow to change, but I would disagree,” added Al Shaqsi. “It is important to do things with proper planning and preparation, and only when the country is ready for it. If you do something too soon or too quickly, it will not be successful and there will be problems in the future. So I think Oman’s planning was very correct in this manner.”
Muscat aside, there are several other airports in Oman. Major airports in Oman are found in Duqm in the Wusta Governorate and Salalah in Dhofar, as well as the town of Sohar in the Batinah region. The Musandam governorate in the north is home to another airport, Khasab airport, which currently operates flights to and from Oman’s northern enclave.