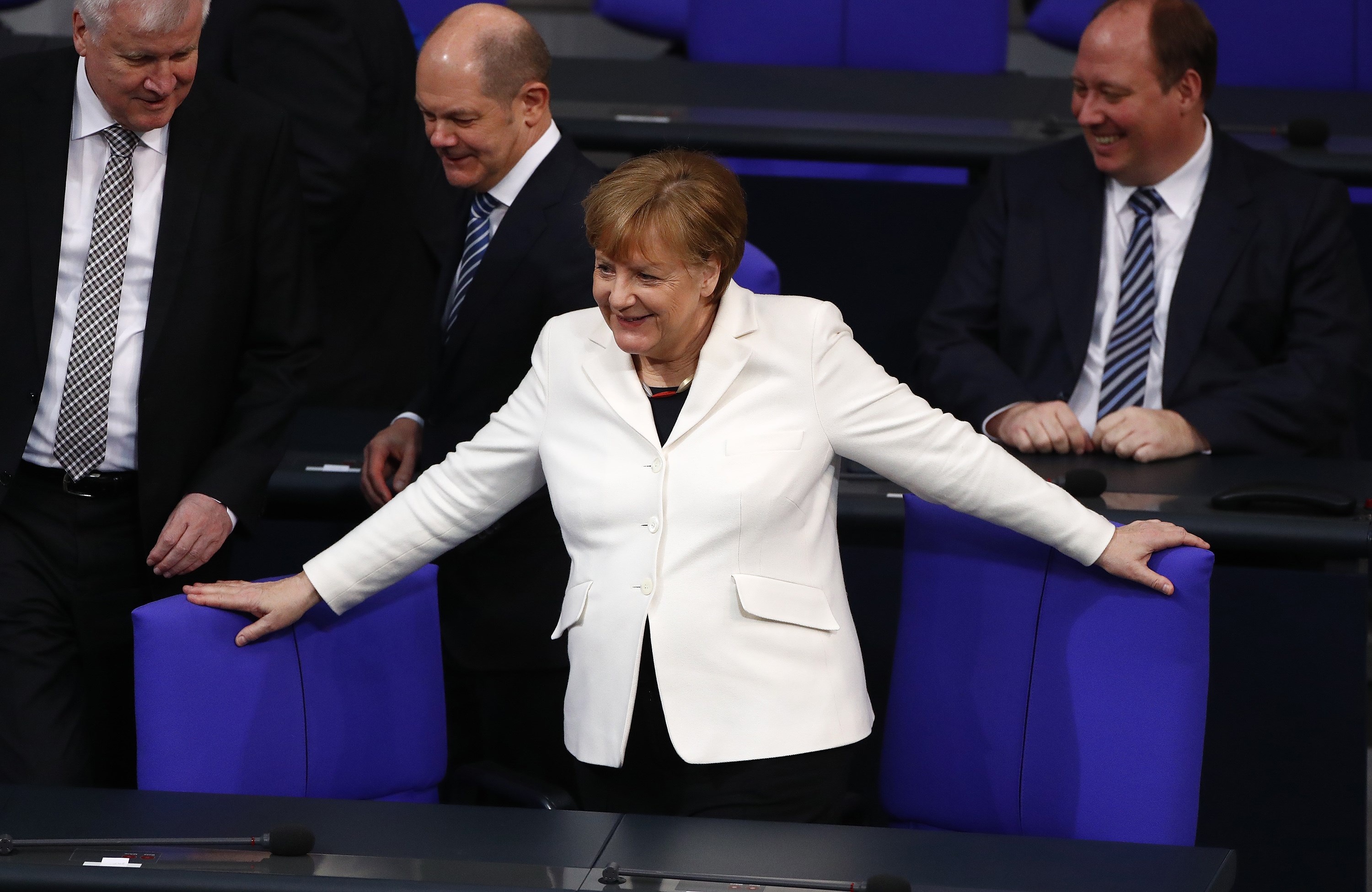 Berlin: German lawmakers voted on Wednesday to re-elect Angela Merkel as chancellor for a fourth, and likely final, term that may prove her most challenging yet as she takes charge of a fragile coalition with her personal standing diminished.
Lawmakers voted by 364 to 315, with nine abstentions, in favour of re-electing Merkel, a humbling start as the coalition of her conservatives and the centre-left Social Democrats (SPD) has 399 votes in the Bundestag lower house of parliament.
"I accept the vote," a beaming Merkel, 63, told lawmakers before being sworn in by Bundestag President Wolfgang Schaeuble.
In office since 2005, she has dominated Germany's political landscape and steered the European Union through economic crisis.
But her authority was dented by her decision in 2015 to commit Germany to an open-door policy on refugees, resulting in an influx of more than one million people that laid bare deep divisions within the EU over migration.
While also being locked in a trade stand-off with the United States, Merkel must now juggle competing domestic demands from within her coalition.
Her conservative CDU/CSU alliance only turned to the SPD to prolong the 'grand coalition' that has governed Germany since 2013 out of desperation, after talks on a three-way alliance with two smaller parties collapsed last November.
"It will not be an easy coalition, we have some difficult tasks ahead," said Volker Kauder, parliamentary leader of the conservative bloc.
Ministers, younger and more diverse than the last cabinet, take up their posts almost six months after last September's national election in which both coalition partners lost support to the far-right Alternative for Germany (AfD).
"I have the feeling that nothing good is going to be done for the country in this legislature period," said Alice Weidel, the AfD's leader in parliament. "It will probably be Angela Merkel's last term and at some point it will be enough."
Merkel starts work with a full inbox.
Abroad she faces the trade tensions with Washington, pressure from France to reform Europe, and from Britain to stand up to Russia.
President Frank-Walter Steinmeier said it was "high time for a new government" to go to work.
"It is good that the time of uncertainty is over," he said at a ceremony with Merkel's cabinet ministers.
Merkel's spokesman said she would head to France on Friday to discuss bilateral, European and international topics with President Emmanuel Macron.
On Tuesday, Merkel's spokesman said she spoke by phone with British Prime Minister Theresa May and condemned a nerve agent attack on an ex-Russian spy in England for which May held Moscow responsible.
Despite that, Russian President Vladimir Putin congratulated Merkel on her re-election in a telegram and emphasized the importance of further developing bilateral ties, the Kremlin said.
At home, the pressure is on both sides of the coalition to deliver for their rank and file. Their deal includes a clause that envisages a review of the government's progress after two years, giving each the opportunity to pull out then if it is not working for them.
Fault lines have emerged in the new government even before its first cabinet meeting, with tensions evident over the sequencing and extent of reforms.
The SPD only agreed to ally with Merkel after promising a list of distinctive policies after the last four years in coalition damaged its standing among voters.