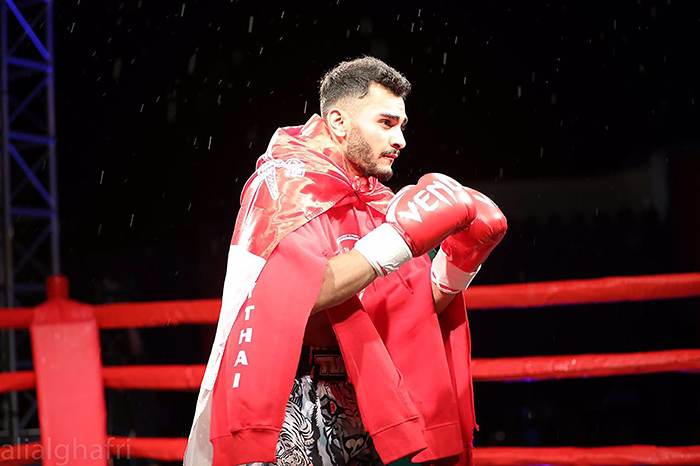 Diving into new challenges has always been on top of Azzan Adil Al Bulushi’s list of favourite things to do. And his biggest achievement yet has come in the form of winning the Oman Fighting Championship (OFC) here in the Sultanate.

With the help of his coaches, Timoor and Ali Mushtaq, he won the title during his first competition in Muay Thai, which enlarged his drive and hunger for the sport. “I was really excited and confident in my abilities. I knew I would win this. After all the hard work and dedication, I got that win,” Azzan said.

Ever since he was young, Azzan had a vision of becoming a fighter. His fascination with this particular sport surfaced after watching a game on TV. As an individual who likes challenges, he knew that he was destined to be in the game. He trained hard and made his countrymen proud.

It began in 2016, when the 22-year-old decided to bring out his inner fighter to play. He would train for hours at a gym in hope of competing in championships. He takes his sport quite seriously, and staying in good shape has become a much needed goal, only achievable through hard work at the gym. “It makes me feel better about myself and provides me with a better healthy lifestyle,” Azzan said.
**media[839778]**
Before participating in a fight, he undergoes intensive training sessions twice a day for three months to help him prepare physically and mentally for the competition. As a dedicated and motivated fighter, losing or winning the championship will not stop him from dreaming.

“Muay Thai is what I love. I’m confident that I’ll get there and compete in bigger events, alongside professional fighters outside of Oman,” he said, adding, “I’m still in the beginning of my career. Hopefully, one day, I’ll become a pro and join bigger events in the near future.”

What the fighter gets out of Muay Thai is discipline and confidence, which hold great value for him. “It teaches you to respect your opponent, no matter what happens inside the ring. After the fight is over, we’re all brothers and good friends. Most importantly, it teaches you how to control your anger and deal with it in a smarter way,” he said.

Today, the sport of Muay Thai is one of the most celebrated Martial Arts around the world. In Oman, it’s perpetually growing with young aspiring fighters such as Azzan, dedicating their effort, time, and money into becoming champions and representing their country.