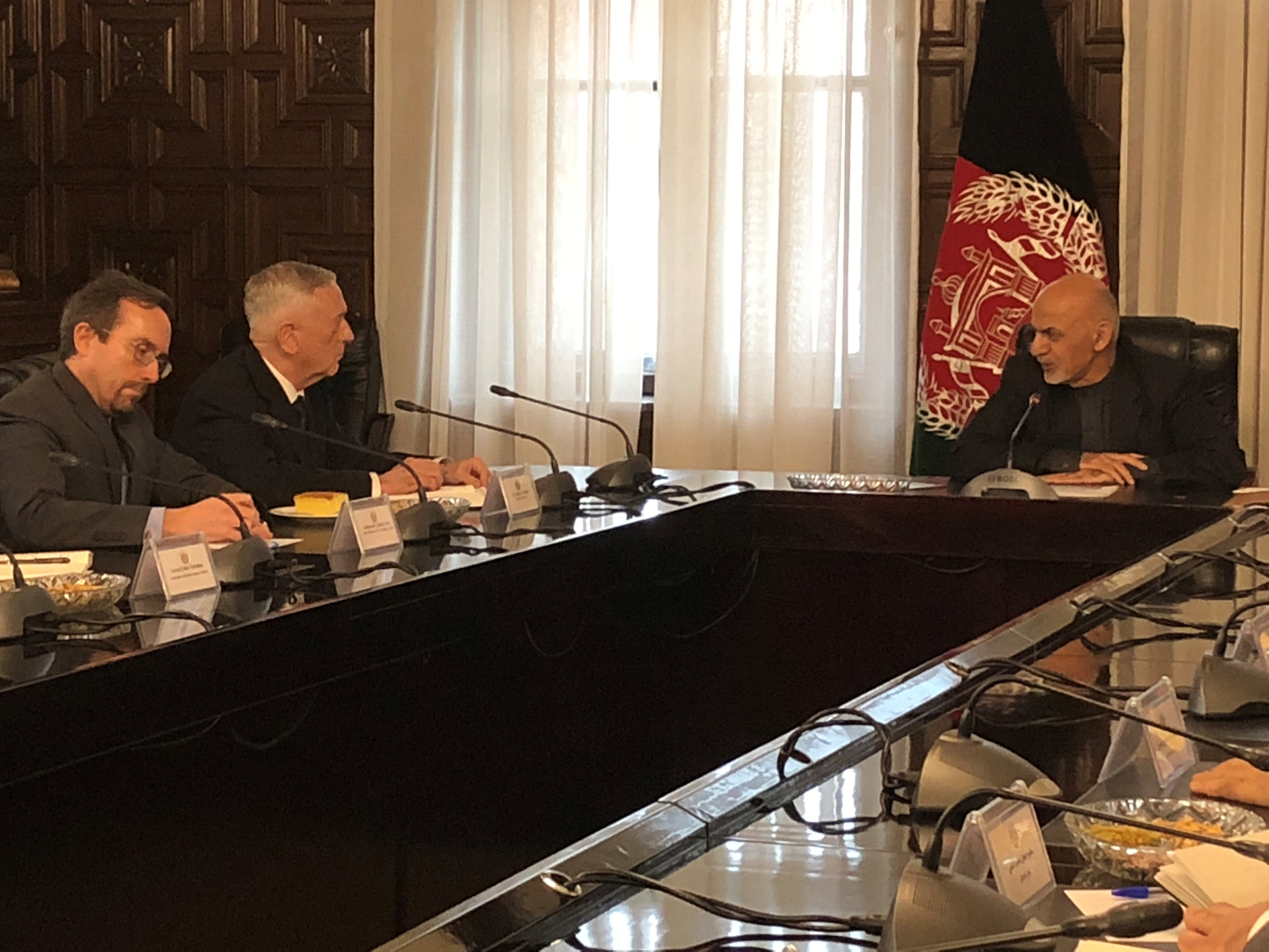 Kabul: The United States is picking up signs of interest from Taliban elements in exploring the possibility of talks with Kabul to end the more than 16-year-old war, US Defence Secretary Jim Mattis said on Tuesday as he made an unannounced visit to Afghanistan.
"There is interest that we've picked up from the Taliban side," Mattis told reporters before landing in Kabul, saying the signs dated back several months.
Afghan President Ashraf Ghani offered talks without preconditions with the Taliban insurgents last month, in what was seen by US officials as a major overture from Kabul.
The United States has stepped up assistance to the Afghan military and greatly increased air strikes against the Taliban as part of a regional strategy announced last year, in a bid to break the stalemate and force the insurgents to the negotiating table.
Ghani, during a meeting with Mattis, described the new US strategy as a game changer, allowing Kabul to extend its peace offer to the Taliban without doing so from a position of weakness.
"It has been a game changer because it has forced every actor to re-examine their assumptions," Ghani said.
Mattis said the goal was to take advantage of Taliban fracturing to peel off insurgents tired of fighting and create a process that could incorporate some Taliban leaders.
He said the positive signals had come from small numbers of insurgents.
"We've had some groups of Taliban - small groups - who have either started to come over or expressed an interest in talking," Mattis said.
"In other words, it may not be that the whole Taliban comes over in one fell swoop. That may be a bridge too far to expect. But there are elements of the Taliban clearly interested in talking to the Afghan government," he said.
The United States has in the past also expressed hope of peeling off elements of the Taliban and it was unclear how this new effort might be different.
Western diplomats and officials in Kabul say contacts involving intermediaries have been underway with the aim of agreeing on ground rules and potential areas of discussion for possible talks with at least some elements in the Taliban.
However, the insurgents, who seized a district centre in western Afghanistan this week, have given no public sign of accepting Ghani's offer, instead issuing several statements suggesting they intended to keep fighting.
While the United States has been stepping up battlefield pressure, Afghanistan's international partners have sought to build diplomatic support from neighbouring countries to push the militants to the negotiating table.
US President Donald Trump's administration has also piled pressure on Pakistan to crack down on militant safe havens on its side of the Afghan-Pakistan border.
Mattis said he had seen some positive indications from Islamabad, noting some Pakistani military operations along the border.
Mattis said the goal was to convince the Taliban that they could not win, which would hopefully push them towards reconciliation.
However, Taliban fighters control large parts of the country, the Kabul government itself is deeply divided and thousands of Afghan soldiers and civilians are killed every year.
Uzbekistan is set to host an Afghan peace conference later this month, where participants are expected to call for direct talks between the militant group and Ghani's government.
However, the Taliban appears likely to miss that conference and have ruled out direct talks with the Western-backed government in Kabul, which they say is an illegitimate, foreign-imposed regime.
They have offered to talk directly to the United States about a possible peace agreement.
Asked whether the United States would be willing to talk directly with the Taliban, Mattis reiterated the US position that the talks should be led by Kabul.
"We want the Afghans to lead and provide the substance to the reconciliation effort," Mattis said.
Outlining his goals for the trip, Mattis said he wanted to get an assessment of both the re-tooled US war effort as well as the reconciliation efforts.
Reconciliation, Mattis said, was "almost an equal priority of my interest going in."