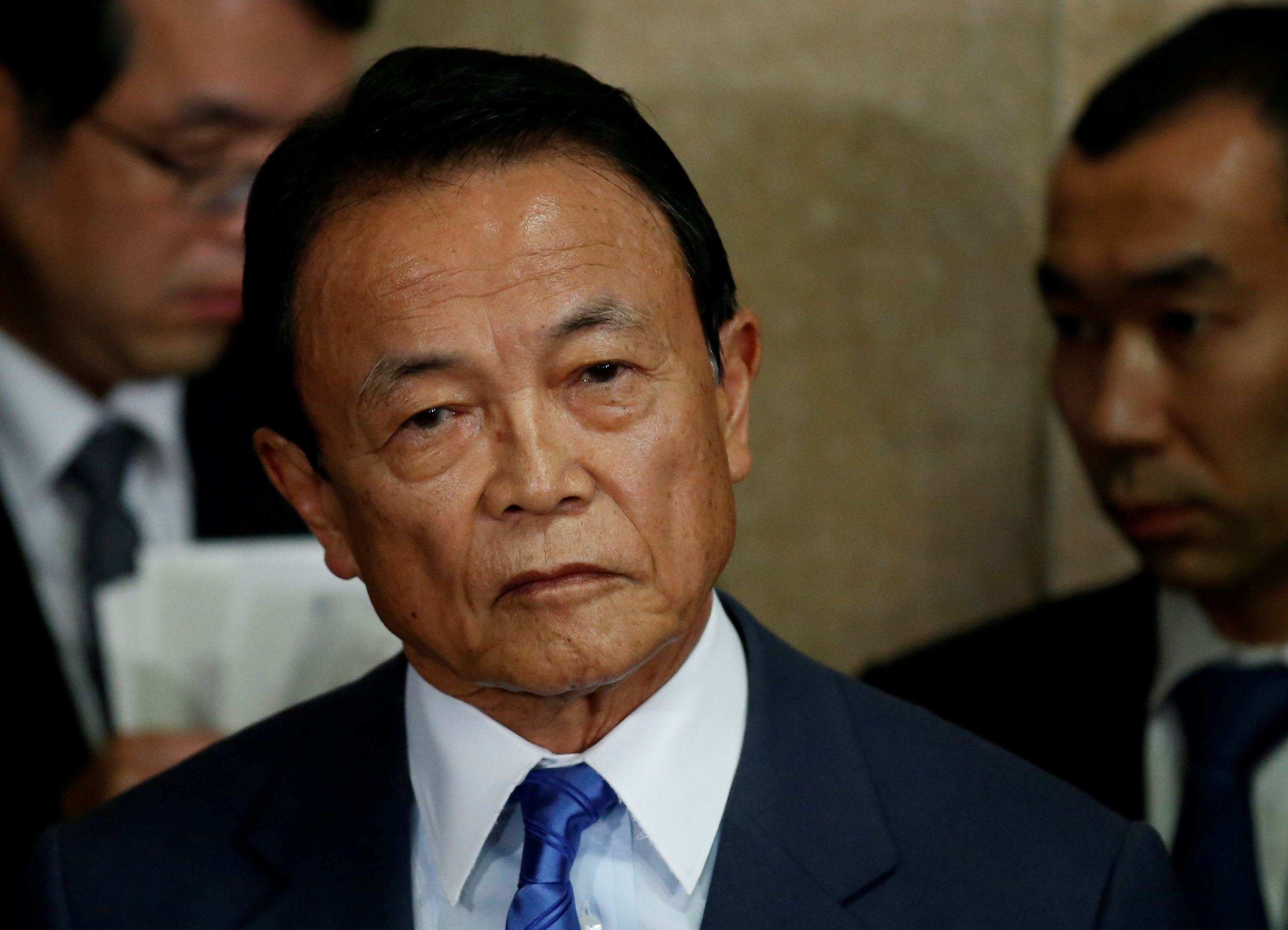 Tokyo: Japanese Finance Minister Taro Aso was preparing to skip a Group of 20 finance leaders' gathering in Buenos Aires next week, officials said on Tuesday, with the minister fighting to survive a cronyism scandal that has paralysed parliament.
Premier Shinzo Abe and Aso, his close ally, are under pressure over the finance ministry's admission that it had altered records of a discounted sale of state-owned land to a school operator with ties to Abe's wife.
The suspicion of a cover-up has rocked the ruling Liberal Democratic Party and could dash Abe's hopes of winning a third term as party leader at a vote in September. Losing the party leadership would ruin Abe's chances of becoming Japan's longest-serving premier.
Opposition lawmakers are calling for Aso to step down to take responsibility, and some analysts believe his resignation could be inevitable.
When asked whether he may skip the G20 on March 19-20, Aso told reporters on Tuesday the decision will depend on the "present parliamentary situation".
"It is important to fully cooperate with the ongoing investigation. To prevent a recurrence, we'll continue to look into the matter and do the utmost to regain (public) confidence," Aso said, signalling his intention to ride out the storm.
The scandal has already caused a stalemate in parliament, with opposition parties threatening to boycott a debate on next fiscal year's budget, potentially delaying reforms to boost long-term economic growth.
"It will probably be difficult for the finance minister to travel overseas at this time," an LDP lawmaker said on condition of anonymity.
Other government and ruling party officials also said Aso was likely to stay home, and let Masatsugu Asakawa, Japan's top financial diplomat, attend the G20 meeting in his place.
The logjam in parliament could also leave two Bank of Japan deputy governor posts vacant when the incumbents' terms end on March 19, as the appointments need lawmakers' approval.
"The firestorm surrounding the cover-up and the land sale will continue to inhibit the administration's ability to move its agenda through the Diet," said Tobias Harris, vice president at Teneo Intelligence, a global advisory firm.
With global fears of a potential trade war set to be discussed at the G20 in Buenos Aires, Aso's absence would be further evidence of the hindrance the scandal has become for Abe's government.
On Monday, Aso blamed bureaucrats for the suspected cover-up. But in a rare move, several ruling party heavyweights have openly criticised Abe over the scandal and warned that politicians - not just bureaucrats - need to take responsibility.
A survey by the Sankei daily showed 71 per cent of respondents said Aso should resign, while support for Abe's administration slid 6.0 points from February to 45 per cent.
"Aso said he would not... resign to take responsibility for the cover-up. But this approach is unlikely to work for long," said Harris of Teneo Intelligence.
Aso leads a powerful faction within the LDP, and if he is forced to resign and feels betrayed it could erode Abe's chances of winning another term, analysts say.
While few analysts at this point are predicting the scandal could lead to Abe's downfall, some say it could impair the prime minister's focus on the pro-growth, reflationist economic policies that have become a hallmark of his government.
Japan's economy is enjoying its longest run of growth in 28 years, thanks to robust global demand and capital expenditure.
The scandal has weighed on markets, though the Nikkei share average managed to rise 0.66 percent on Tuesday. The yen held firm against the dollar, as the scandal raised doubt about Abe's ability to pursue economic policies that have kept the yen weak.
"If Aso resigns, that would give Aso's political faction a freehand, making the LDP leadership race in September extremely fluid. In the worst case, Abe may not make it for the third term," said Hidenori Suezawa, analyst at SMBC Nikko Securities.
"If Abe goes, Abenomics will go back to square one."