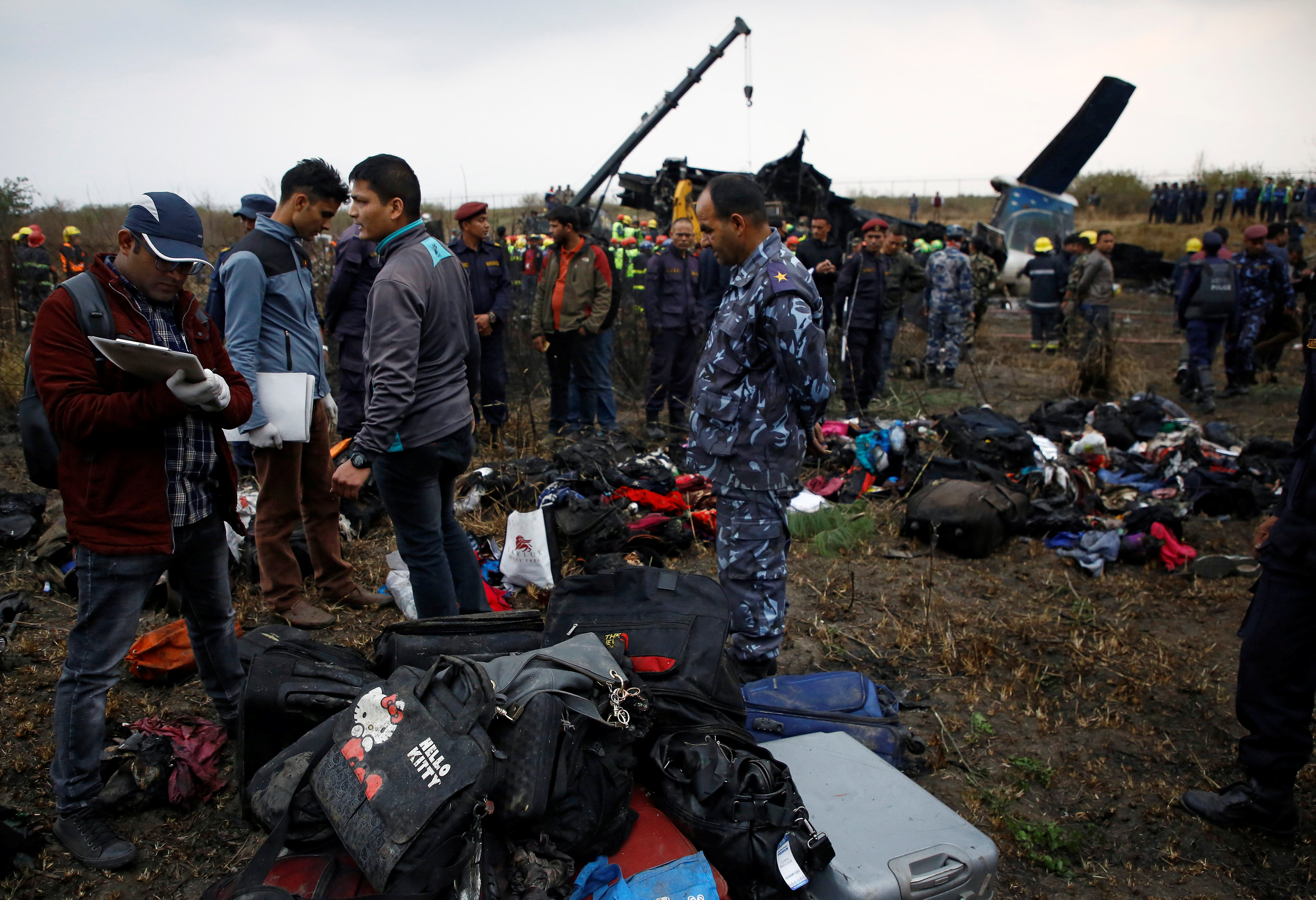 Kathmandu: Investigators have retrieved the flight data recorder from the wreckage of a Bangladeshi airliner that crashed, killing at least 49 aboard, including the crew, when it attempted to land in Nepal's capital, officials said on Tuesday.
The airline and airport authorities in Kathmandu have blamed each other in the aftermath of Monday's aviation disaster, the Himalayan nation's worst since the 1992 crash of a Pakistan International Airlines (PIA) aircraft killed 167.
"The flight data recorder has been recovered, we have kept it safely," said Raj Kumar Chettri, the airport's general manager, adding that an investigation had begun into the cause of the crash.
The Bombardier Q400 series aircraft was carrying 71 people from the Bangladeshi capital of Dhaka when it tried to land in conditions of visibility that weather officials said exceeded 6 km (4 miles), with clouds at one end of the runway and a light tailwind of six to seven knots.
Flight operator US-Bangla Airlines said Captain Abid Sultan, a former pilot of the Bangladesh Air Force, had landed more than 100 times at Kathmandu, where wind shear and bird hits are frequent hazards.
Sultan had more than 5,000 hours of flying experience and was specially trained to land at the airport, said airline spokesman Kamrul Islam.
The airline also denied a media report that the aircraft had skidded off the runway during a domestic flight in 2015, saying it "never ever encountered any accident. It had no technical glitches."
Defending the pilots, airline chief executive Imran Asif cited a transcript of their radio conversation with ground control in Kathmandu that was issued by a German air safety website, JACDEC.
"We suspect wrong signals from Kathmandu air traffic control room might have led to the crash," Asif told reporters on Monday.
"A three-minute conversation between the pilot and the air traffic control before the landing indicated that they sent a wrong signal to the pilot."
The transcript, which Asif said was accessible on YouTube, reveals confusion over the runway designated for the flight to land.
Transmissions by the Kathmandu tower controller show that, despite being cleared to land on runway 02, the flight began deviating from its course.
The captain and the tower controller discussed which runway the aircraft was aiming for, the website said. At one point, the controller told the woman copilot she was heading toward runway 20, although the aircraft had been cleared for runway 02.
Later, the captain took over the conversation and confirmed the plan to land at runway 02. At one stage, ground control said runway 20 had also been cleared for landing, however.
Eventually the plane made an attempt to land on the runway it was originally meant to use, but crashed short of it, broke into pieces and caught fire. Both pilots are dead.
Sanjiv Gautam, a senior Nepali civil aviation official, did not directly confirm the authenticity of the transcript, saying instead that publication of such exchanges went against the law.
"We don't know how it got out," said Gautam, the director general of the Civil Aviation Authority of Nepal. "It's illegal for such conversations to be made public."
On Tuesday, airport operations had returned to normal, while the wreckage of the crashed aircraft lay on a piece of ground near the runway, guarded by security personnel, Reuters video images showed.
A US-Bangla plane took off for Kathmandu from Dhaka on Tuesday, carrying seven airline officials and 46 relatives of the passengers.
"Regardless of what contributed to this tragic accident, we are sorry," Asif, the airline's chief executive, wrote on networking website LinkedIn. "And we stand by the bereaved families of those who lost their loved ones."
On Monday, Kathmandu airport officials said they had asked the pilots if they faced a problem after the aircraft changed course in the final descent, but the pilots said they were not.
The plane was then seen circling twice in a northeast direction, Chettri said. Traffic controllers again asked the pilot if things were OK, and he replied, "Yes".
The tower then told the pilot his alignment was not correct, but received no reply, Chettri added.
Canadian plane maker Bombardier said it was sending an air safety investigator and a field service representative to the site.