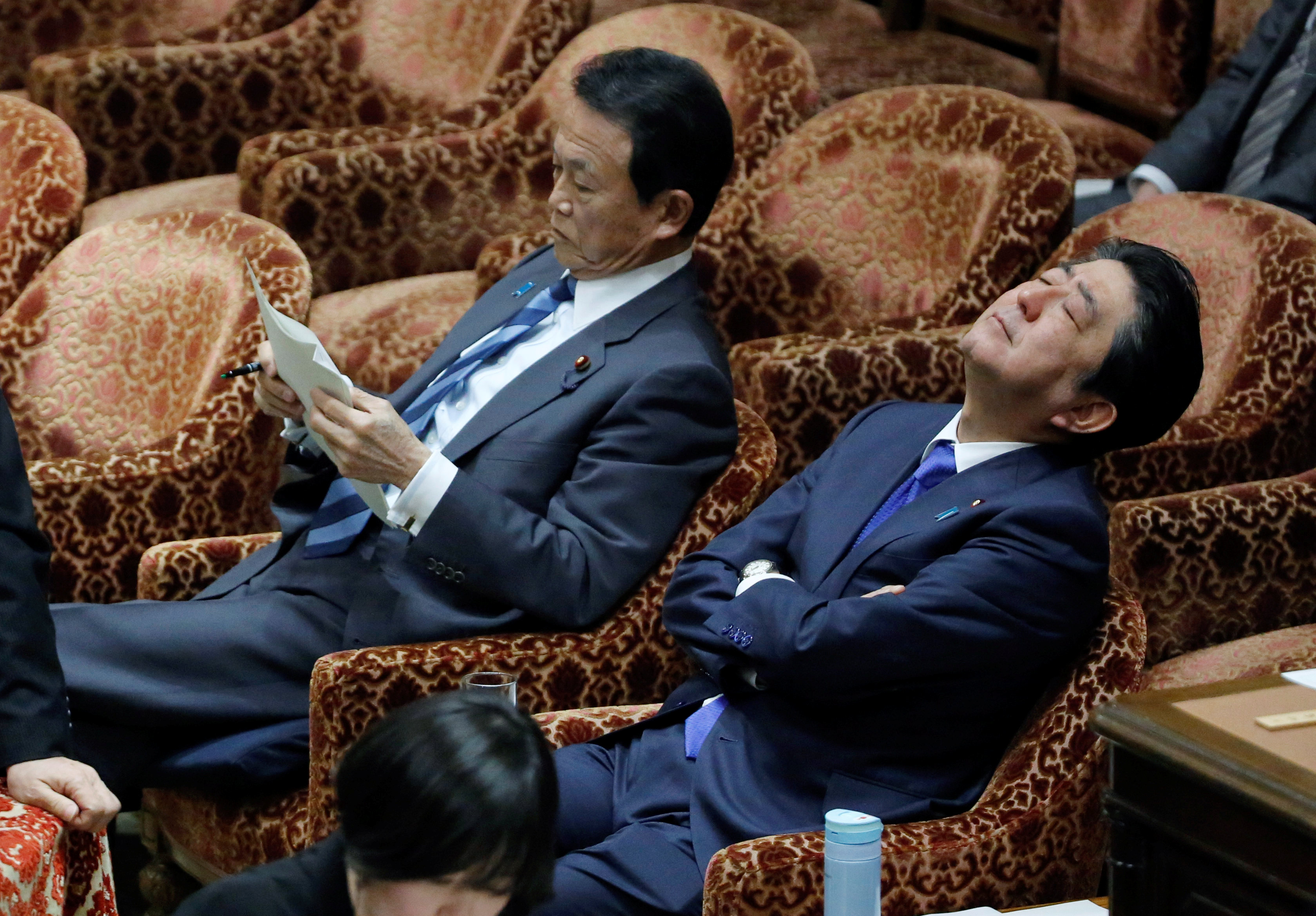 Tokyo: Japanese Prime Minister Shinzo Abe and his ally, Finance Minister Taro Aso, face mounting pressure over a suspected cronyism scandal as the finance ministry prepares to report on Monday that documents in the case were doctored.
Abe, now in his sixth year in office, had hoped to put the issue of the sale of state-owned land at a huge discount to a school operator with ties to his wife, Akie, behind him. But it has gathered steam with a series of fresh revelations.
A source with direct knowledge of the matter told Reuters on Saturday the finance ministry planned to report to parliament on Monday that it had found instances where content was deleted from documents submitted to lawmakers. The source spoke on condition of anonymity.
"If this is true, isn't political responsibility unavoidable?" Akira Nagatsuma, a senior lawmaker in the opposition Constitutional Democratic Party of Japan, told reporters on Sunday.
Abe has repeatedly denied he or his wife did favours for school operator Moritomo Gakuen, which bought the land, and has said he would resign if evidence were found that they had. The issue last year sharply eroded Abe's popularity.
Former Moritomo Gakuen head Yasunori Kagoike and his wife were arrested in July on suspicion of illegally receiving subsidies.
On Friday, National Tax Agency chief Nobuhisa Sagawa abruptly resigned over his remarks in parliament about the case.
Also on Friday, media said police were investigating as possible suicide the death of a finance ministry official whose local office had handled the land sale.
"If Minister Aso signed off on National Tax Agency chief Sagawa's resignation knowing about the falsified documents, moves seeking his resignation are inevitable," Yuichiro Tamaki, leader of the opposition Democratic Party, told reporters.
Suspicions of an attempted cover-up could slash Abe's ratings and dash his hopes of a third term as ruling Liberal Democratic Party leader. Victory in the LDP September leadership vote would put him on track to become Japan's longest-serving premier.
"If Aso were forced out, it would be a critical blow to the prime minister, reinforcing the impression of a cover-up and depriving Abe of a key ally who has served as finance minister since December 2012," wrote Tobias Harris, vice president of consultancy Teneo Intelligence in an email report.
Sagawa headed the ministry division that submitted the documents before he was tapped as tax agency chief in July, an appointment critics saw as a reward for his efforts to diffuse the issue with his statements to parliament last year.
Aso and Abe have both defended the appointment as "appropriate" and Aso has said he will not resign.
"If these documents were falsified, the entire cabinet should resign," tweeted Mizuho Fukushima, a lawmaker with the tiny opposition Social Democratic Party.
Abe, 63, swept back to power in December 2012 promising to revive the economy and bolster its defence.
It was a rare comeback for the conservative lawmaker, who quit abruptly in 2007 after a year in office marked by scandals in his cabinet, a deadlocked parliament and ill health.
His ruling bloc won a two-thirds "super majority" in a October lower house poll, helped by opposition disarray.