Charles Darwin and the Galapagos Islands 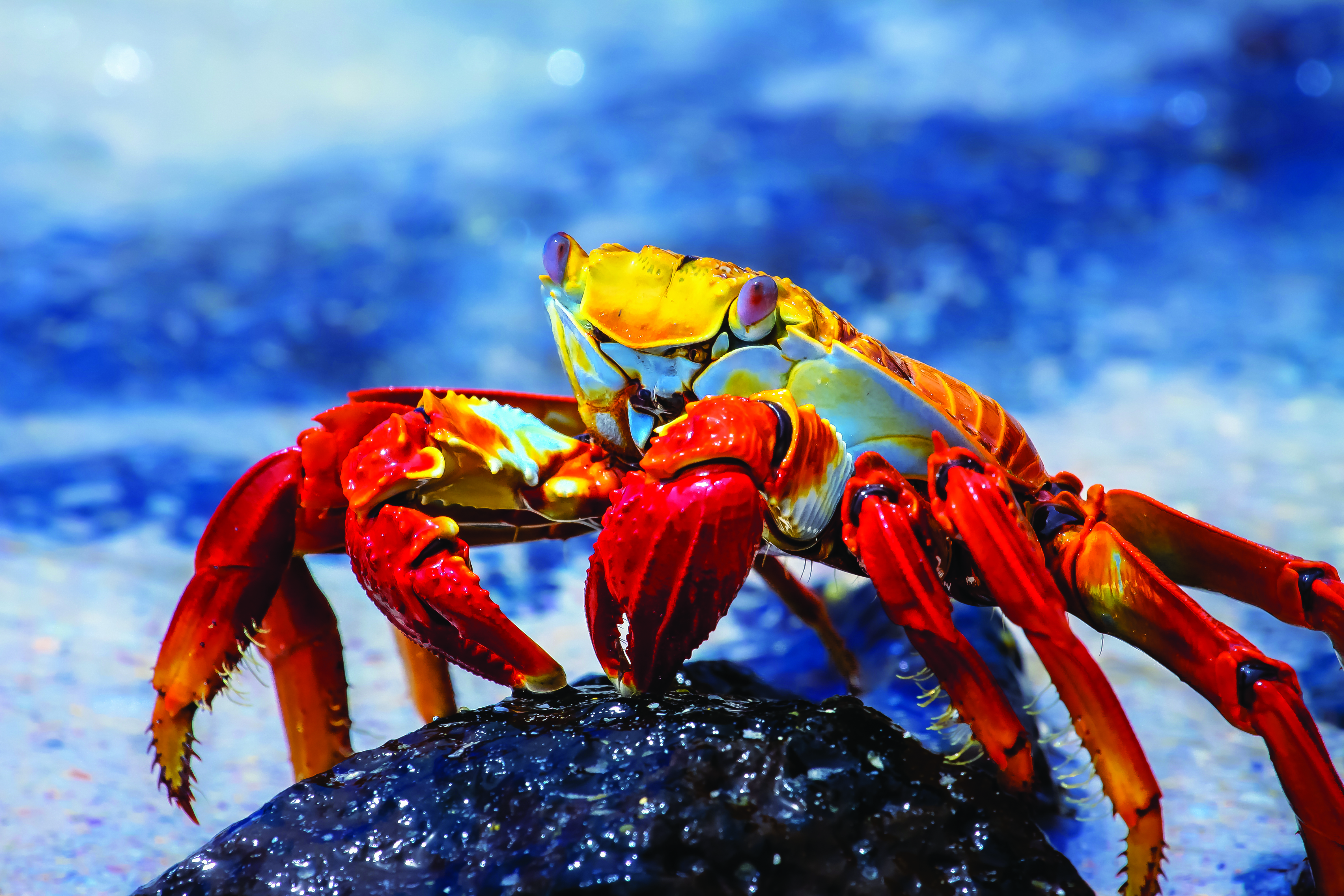 It is quite humbling that a scattering of scarred volcanic islands, flung across 45,000sqkm of ocean and 960-odd kilometres adrift the Ecuadorian mainland and defying permanent human colonisation till the 20th century, should have been so instrumental in changing humanity’s perception of itself. Yet, once feared as a bewitched and waterless hell, then the haunt of pirates, and later still, a pit-stop for whaling ships, it was the forbidding Galapagos Islands that spurred Charles Darwin to formulate his theory of natural evolution by natural selection, catapulting social sciences into the modern era and colouring the values and attributes of the Western World ever since.

A visit to the Galapagos Islands is a journey of a lifetime, a definite must on everyone’s travel bucket list. Where else could one be up close with playful sea lions, gigantic sea-tortoises, elegant albatrosses, sneaky Frigate birds, light-foot crabs, and the blue-feet booby bird apart from a wide range of aquatic wildlife? The Islands’ volcanic geology and its rich flora and fauna have attracted tourists, nature lovers, and scientists, who still remain baffled as to how such a large diversity of species developed in such a remote location.

According to information available on the internet: “The first recorded visit to the islands happened by chance in 1535, when Fray Tomás de Berlanga, the Bishop of Panamá, was surprised by this undiscovered land during a voyage to Peru. De Berlanga eventually returned to the Spanish Empire and described the conditions of the islands and the animals that inhabited them. The first crude map of the islands was made in 1684 by buccaneer Ambrose Cowley, who named the individual islands after some of his fellow pirates or after British royalty and noblemen.”

“These names were used in the authoritative navigation charts of the islands prepared during the Beagle survey under Captain Robert Fitzroy, and in Darwin’s popular book The Voyage of the Beagle. The Voyage of the Beagle brought the survey ship HMS Beagle, under captain Robert Fitzroy, to the Galápagos in 1835 to survey approaches to harbours. The captain and others on board, including his companion, the young naturalist Charles Darwin, made observations on geology and biology in Chatham, Charles, Albemarle, and James islands before they left on October 20 to continue on their round-the-world expedition. Primarily a geologist at the time, Darwin was impressed by the quantity of volcanic craters they saw, later referring to the archipelago as ‘that land of craters’,” the information further states.

“Darwin’s study of several volcanic formations over the five weeks he stayed in the islands led to several important geological discoveries, including the first, correct explanation for how volcanic tuff is formed. Darwin noticed the mockingbirds differed between islands, though he thought the birds, now known as Darwin’s finches, were unrelated to each other, and did not bother labelling them by island. Nicholas Lawson, acting Governor of Galapagos for the Republic of the Equator, told Darwin that the tortoises differed from island to island. Towards the end of the voyage, Darwin speculated that the distribution of the mockingbirds and the tortoises might ‘undermine the stability of species’. When specimens of birds were analysed on his return to England, it was found that many different kinds of birds were species of finches, which were unique to islands. These facts were crucial in Darwin’s development of his theory of natural selection explaining evolution, which was presented in The Origin of Species,” it further says.

The Galapagos, a cluster of 19 volcanic islands, is a double heritage site since both the land and the sea are protected. Each island boasts of its own unique landscape, ranging from barren black, volcanic rocks to swaths of white sand beaches melting into gemstone-blue water. Its isolated terrain shelters a diversity of plant and animal species, many found nowhere else. The archipelago is characterised by numerous contemporaneous volcanoes, some with plume magma sources, others from the asthenosphere, possibly due to the young and thin oceanic crust. While the older islands have disappeared below the sea as they moved away from the mantle plume, the youngest islands, Isabela and Fernandina, are still being formed.

No species has done more to upset the delicately balanced ecosystem of the Galapagos Islands than humans.

The Galapagos Islands became a National park in 1959 and tourism started in 1960. The tourism industry rakes in hundreds of millions of American dollars into the economy of Ecuador. Even though the number of tourists increase year on year, the National Parks are very well regulated. The visitor sites are limited, and well-defined trails and accredited guides have kept a healthy balance of conservation. The busiest months for tourism are June through August and the months of December and January, as well. Reaching the islands is not simple. One needs to fly into any of the international airports of Ecuador, namely the capital Quito or Guayaquil. Then one needs to take a domestic flight to the Islands.

Visitors are allowed only at 116 sites in the Galapagos, of which 54 are land sites and 62 are scuba diving or snorkelling sites. Small groups are allowed to visit in two- to four-hour shifts only, to limit impact on the area. All groups need to be accompanied by licensed guides. Still, tourist activities abound. Wildlife watching is the most favoured activity.

Wolf and Darwin islands are excellent for diving, where encounters with whale sharks, eagle rays, and schools of fish are possible, or even snorkelling along with sea lions and turtles. Kayaking and surfing options also exist on a few of the islands. For hikers, there are treks over dried lava beds along the rim of the active volcanoes or a trek to the highlands to see the variety of vegetation.

Island-hopping can be fun but it is severely restricted, keeping in view the fragile ecosystem. The Charles Darwin Centre is a must-see.

The main islands of San Cristobal, Bartholomew, North Seymour, and Santa Cruz are relatively easy to access and have modern amenities such as accommodation and eating spaces. The Charles Darwin Centre is a must-see.

A favoured activity is hiking around Sierra Negra, the world’s second-largest crater, on Isabela Island. This particular island is home to the Tagus Cove, which has the biggest population of penguins and a majority of giant tortoises. One needs to plan and visit the Western Islands as well for some unbelievable wildlife variants. The Charles Darwin Research Centre on the island of Santa Cruz and the Galapagos Interpretation Centre on Christobal Island have tortoise breeding centres.

It is a fascinating place to learn about the species and how each one is different from the other and unique to the islands they are from. The Fernandina islands has the biggest population of marine iguanas, as well as the biggest sea lion colony, whereas, almost the entire population of Albatross rests on the Espanola islands.

Island-hopping can be fun but it is severely restricted, keeping in view the fragile ecosystem. The main islands of San Cristobal, Bartholomew, North Seymour, and Santa Cruz are relatively easy to access and have modern amenities such as accommodation and eating spaces. The Charles Darwin Centre is a must-see.

To reach the Galapagos Islands from Oman is quite a journey. An 8-hour flight to Amsterdam with KLM from Muscat is followed by another 12-hour flight to Quito, and finally, another hour-and-a-half flight to the islands by local airlines such as AeroGal.