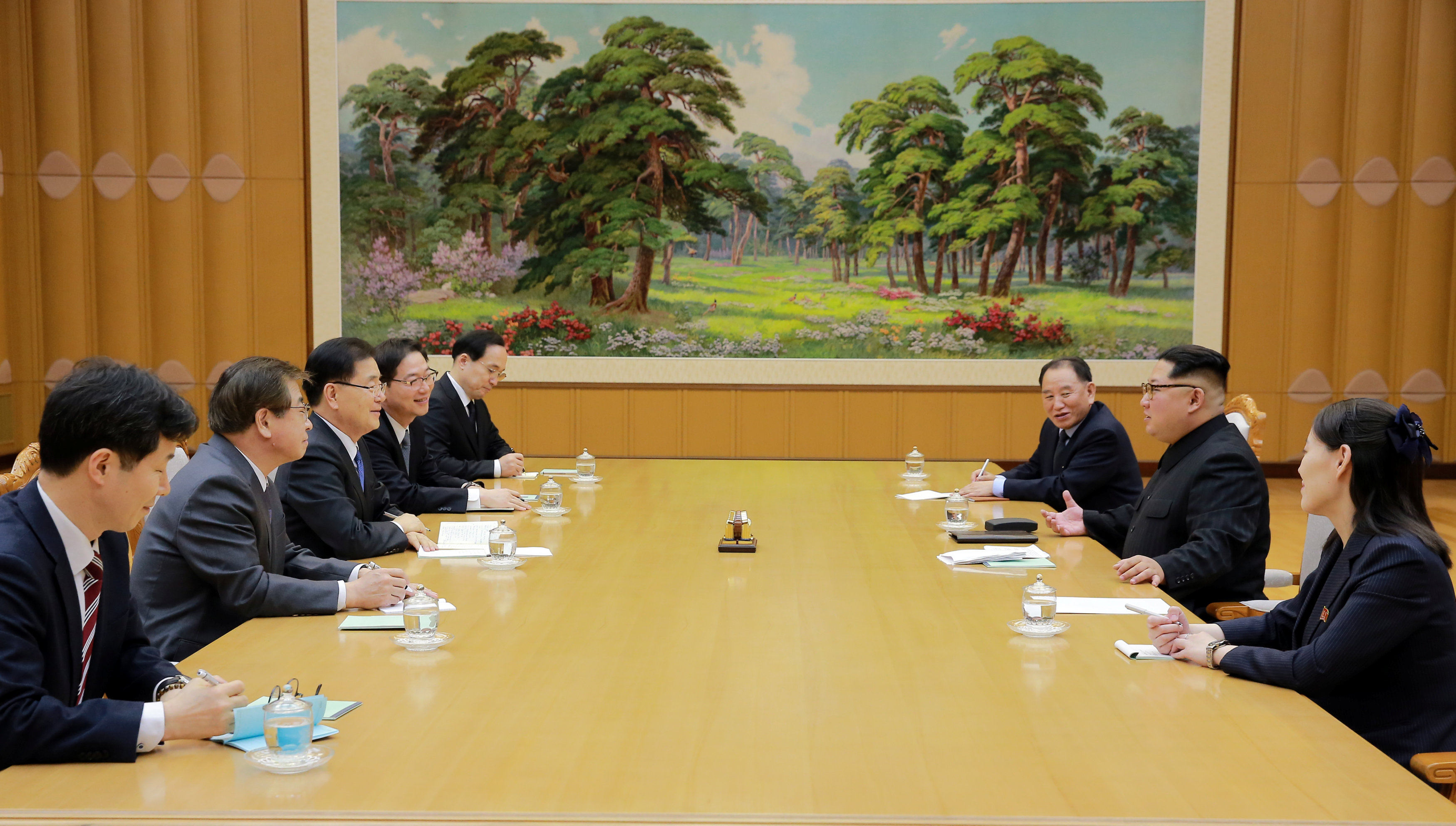 Seoul: North Korean leader Kim Jong Un met senior South Korean government officials for the first time and said it is his "firm will to vigorously advance" inter-Korean ties and pursue reunification, the North's official news agency said on Tuesday.
A 10-member South Korean delegation led by National Security Office head Chung Eui-yong travelled to the North Korean capital, Pyongyang, on Monday in hopes of encouraging North Korea and the United States to talk to one another.
Washington and Pyongyang have been at loggerheads for months over the North's nuclear and missile programmes, with US President Donald Trump and Kim Jong Un trading insults and threatening war.
Tensions between the two Koreas eased during the recent Winter Olympics in South Korea, where President Moon Jae-In hosted a high-level North Korean delegation. Kim Jong Un invited Moon to North Korea for a summit, which Moon said the two sides should work towards.
"Hearing the intention of President Moon Jae In for a summit from the special envoy of the south side, (Kim Jong Un) exchanged views and made a satisfactory agreement," the North's Korean Central News Agency (KCNA) said of the meeting.
The agency did not provide details on what that agreement was but an official from the presidential Blue House in Seoul said it partially addressed the summit offer made by the North.
North Korea has been developing nuclear-tipped missiles capable of reaching the United States but Pyongyang and Washington both say they want a diplomatic solution.
Seoul's delegation met Kim Jong Un, his sister Kim Yo Jong, Kim Jong Un's wife and other officials on Monday, said Kim Eui-kyeom, a spokesman for the South's presidential office. Kim Yo Jong attended the Winter Olympics opening ceremony last month.
The delegation will wrap up a two-day trip to Pyongyang later on Tuesday after another meeting with North Korean officials, the spokesman said.
Blue House officials could not confirm whether Kim Jong Un would be present at Tuesday's meeting.
Chung said in Seoul before leaving on Monday his team would deliver the South Korean president's wish to bring about denuclearisation of the Korean peninsula and permanent peace.
Kim Jong Un gave orders for "practical steps" regarding the letter from Moon that was delivered to him by the delegation, KCNA said without elaborating.
"He also made an exchange of in-depth views on the issues for easing the acute military tensions on the Korean Peninsula and activating the versatile dialogue, contact, cooperation and exchange," the report said.
Both North Korea and the United States have said they are open to talks but the US position has been that dialogue must be aimed at North Korea's denuclearisation, something Pyongyang has rejected.
Moon has also remained vigilant against North Korea's weapons ambitions, saying on Tuesday South Korea should bolster its defences in tandem with talks with Pyongyang.
The Pentagon has nevertheless said it was "cautiously optimistic" about the North-South talks, which resumed in January for the first time in two years.
North Korea has vowed never to give up what it calls an essential deterrent against US hostility. Pyongyang has not carried out any nuclear or missile tests since November.
Although the North is carrying out annual winter military exercises, it has not engaged in unusual behaviour, according to South Korea's defence ministry.
The Washington-based North Korea monitoring project, 38 North, said satellite images from last week indicated North Korea's main nuclear reactor may be operating, meaning that it had resumed production of plutonium, presumably for its nuclear weapons programme.
Steam plumes were observed from the reactor in images from February 17 and 25 and such vapour plumes had "generally been a useful indicator of reactor operations", 38 North said in a report on Monday.
However, the report said no cooling water discharges had been observed. That could mean the plumes were unrelated to reactor operations, or that the discharge pipeline had been extended into a nearby river in an attempt to disguise activity.
"The presence of ice melt on the river supports the conclusion that the reactor is indeed operating and that the outfall pipeline has been extended," it said.