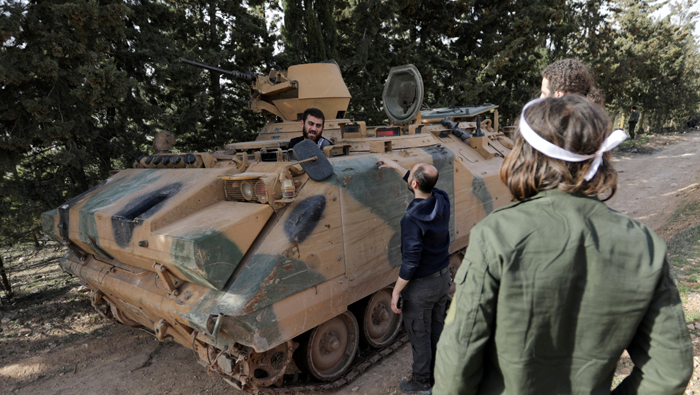 Beirut:Turkish shelling and air strikes killed 13 people in the town of Jandiris in Syria's Afrin region on Monday, Kurdish militia said, while a war monitoring group put the death toll at 22.
Turkey launched an offensive on Afrin in January to drive out the YPG, which it regards as a terrorist group and as an extension of a Kurdish insurgency at home.
Rojhat Roj, a spokesman for the Syrian Kurdish YPG militia in Afrin told Reuters: "There are 13 people killed including three children."
On the road between the village of Rajo and the region's main town, also called Afrin, 22 civilians were wounded due to Turkish bombardment, Roj added. The Syrian Observatory for Human rights, a Britain-based monitor, said heavy Turkish air strikes had killed 17 people, and injured 92 others. Many were still under the rubble, which might raise the number of victims, the monitor added.
Turkey has repeatedly denied hitting civilians in its operation in Afrin in northwest Syria. In Ankara, Turkish Deputy Prime Minister Bekir Bozdag, the government’s main spokesman, told a news conference that Turkey was not harming civilians in Syria, adding that the Turkish army was able to differentiate between civilians and militants.
"All the claims that Turkish forces are harming civilians in Operation Olive Branch are unfounded. It is unacceptable," Bozdag said. The United Nations Security Council passed a resolution on February 24 demanding a full month-long ceasefire across Syria excepting only groups that it had designated as terrorists.
Turkey has said the ceasefire resolution does not apply to the YPG and has rejected Western calls for it to implement the truce. Since launching the campaign the Turkish army and allied Syrian rebels have since gained control over the outer edge of Afrin along its border with Turkey.
Ankara sees the YPG as an extension of the outlawed Kurdistan Workers Party (PKK), which has waged a decades-long insurgency on Turkish soil.