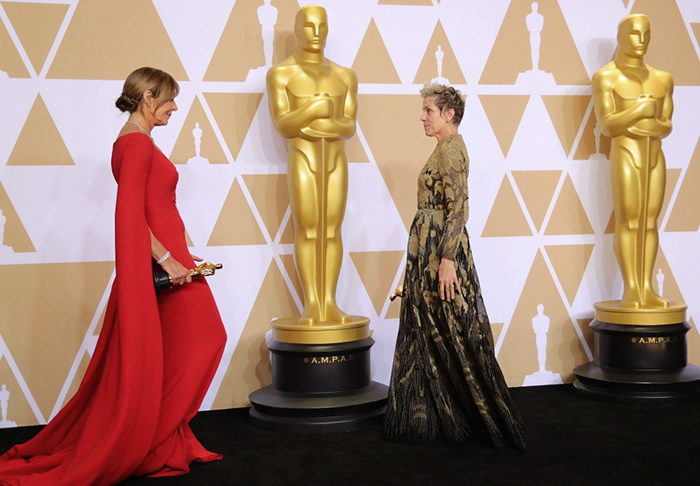 The stars of Hollywood sparkled on the Oscars red carpet on Sunday with plunging necklines and vibrant bursts of colour, as the awards season’s grand finale signalled that anything goes in fashion, as long as it’s fabulous.
Celebrating her first Oscar nod, best supporting actress nominee Allison Janney made a statement in a scarlet red gown from Reem Acra with a deep V neckline and dramatic flared sleeves.
“Get Out” star Allison Williams chose dusty pink with sparkles, a decidedly demure princessy look amid the sea of low-cut gowns. Her co-star Betty Gabriel’s teal Tony Ward bodice left little to the imagination.
Those on the world’s most-watched runway appeared to throw off the fashion constraints of the Golden Globes, where women protesting the 'misconduct' that has roiled the entertainment industry opted for black gowns.
Instead, the film world’s glitterati chose what made them feel best, whether classic gowns or edgier, flesh-baring looks.
“There is diversity everywhere - there is no formula anymore,” said Rickie De Sole, W magazine’s fashion market director. “It looks like people are embracing personal style more than just wearing a typical dress. It’s kind of whatever goes.”
Presenter Salma Hayek, wearing a lilac gown with tiers of sequins and rhinestones worthy of “One Thousand and One Arabian Nights,” cited the female solidarity that was changing how Hollywood was run.
**media[835296]**
“Here we are to celebrate the fact that women will not have to struggle as hard together,” said Hayek. “I know that future generations will have it easier.”
Threatened by possible showers, the red carpet instead proceeded under sunny skies, where a host of bold colours in emerald, purple, and shocking pink appeared to glow.
“I’m humbled by the whole thing,” said Mary J. Blige, nominated for two Oscars for “Mudbound,” wearing a form-fitting white gown with cap sleeves and sequins. “I worked really hard but I didn’t know I was going to get all this.”
Sandra Bullock, a presenter, opted for sparkles with a shoulder-revealing gown with gold sequins.
The first Hispanic actress to win an Oscar, Rita Moreno returned to the red carpet on Sunday.
“This is the gown I wore in 1962 when I won my Oscar” for “West Side Story,” said the 86-year-old Moreno, showing off her strapless back gown with a ballooning skirt printed with dramatic gold graphics.
US skaters Adam Rippon and Mirai Nagasu brought Olympic flair to the runway, with Rippon giving a nod to bondage with his Moschino tuxedo with leather straps. Neutralising his edgy look was Nagasu on his arm in a light blue romantic lace look.