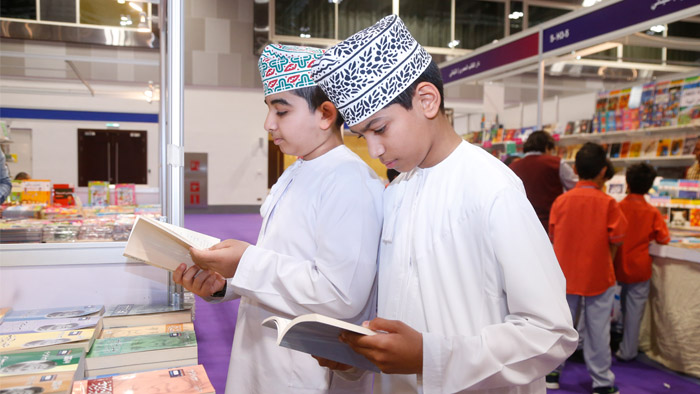 Thousands of bibliophiles have visited the 23rd Muscat International Book Fair at the Oman Convention and Exhibition Centre, where as many as 500,000 titles, of which 35 per cent are new books, are currently on display till March 3.
Safa Al Hadrami, an avid reader, admitted that she had been saving up for the last two months to buy as many books as possible at this much-awaited event.
“I developed the habit of reading only a year ago. I must say that reading has helped me so much, with thinking better and changing my opinions about so many things. I saved up for this fair because I knew that I would be able to find my favourite books here, ones that I don’t normally find at bookshops in Muscat.”
Huda Al Hudhaili, a teacher and resident of Muscat, who is originally from Tunisia, had also marked her calendar ever since she heard about the book fair. “I am relatively new in Muscat and it’s not easy to find a good range of books for children. I have three children, who get hungry for books now and then. Last month, my friend told me about the book fair and since then, I have been counting the days,” she said.
“My children and I spent about three hours at the book fair and found interesting books enough for another six months. This event has been the best thing that has happened since we moved to Muscat in August 2017,” she added.
This year, 28 countries have participated in the fair, including 17 Arab countries – Oman, Egypt, Lebanon, Syria, Jordan, UAE, Kuwait, Saudi Arabia, Iraq, Palestine, Sudan, Bahrain, Tunisia, Algeria, Qatar, Morocco and Libya. Other participants are the United Kingdom, Iran, Turkey, Canada, Japan, Sweden, Brunei Darussalam, Italy, the United States, Germany and Pakistan.
“The total area occupied by the exhibition is 12,114 square metres and includes 1,200 pavilions. Starting this year, the ministry will honour three Omani intellectuals and writers as well,” Dr Abdul Munim bin Mansour Al Hassani, Minister of Information and Head of the Muscat International Book Fair committee, said. The exhibition also includes more than 70 cultural events and children’s activities.
“The exhibition includes a number of activities, including the corner of book friends, the corner for people with special needs, the village of colours, and the corner of the global village,” Hamoud Al Harthy, Undersecretary of the Education Ministry and Head of the Child Activity team, said.
The yearly book fair is ranked among three best book fairs in the Gulf region and among the top 10 in the Arab world.