London is the launch destination for Qatar Airways' Airbus A350-1000 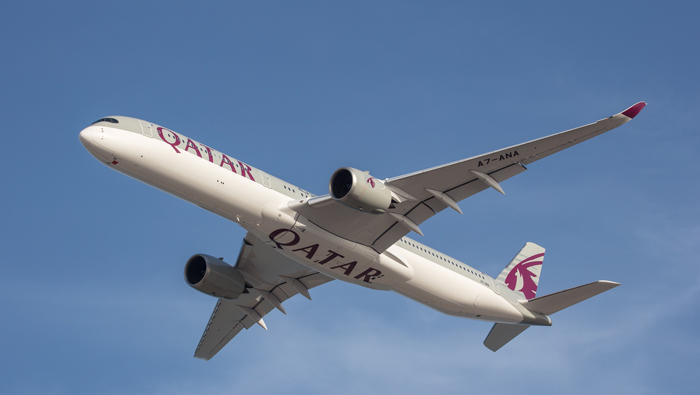 Doha: Qatar Airways announced that London is the first route for the world’s first commercial service of its Airbus A350-1000.
The five-star Gulf carrier is the global launch customer for the state-of-the-art-aircraft, following delivery by Airbus from the aircraft manufacturer’s base in Toulouse, France last Tuesday.
The world’s first A350-1000 XWB embarked upon its first commercial service to the UK capital on February 24 as QR 15 at 15:55 hrs and after a seven-hour 30-minute flight, landed at London’s Heathrow Airport at 20:25 hrs. The A350-1000 will operate a daily non-stop service between Doha and London.
Akbar Al Baker, Group Chief Executive - Qatar Airways said, “We have chosen London as the inaugural destination for this remarkable aircraft because at 23 feet longer than the A350-900, it is able to provide a significant increase in capacity on one of our most popular routes, offering enhanced levels of comfort for our passengers. For the first time in an Airbus aircraft, it will also feature our award-winning, patented Qsuite, offering a First Class experience in Business Class for both business and leisure travellers. As one of our flagship routes, we provide our passengers with the most advanced aircraft to fly in comfort and style from Doha to London. Our new A350-1000 provides this in abundance, alongside its sister aircraft, the A350-900, the double-decker A380 as well as the Boeing Dreamliner and the Qsuite-fitted Boeing 777. We look forward to introducing this highly-impressive next-generation aircraft to many other cities, thanks to our extensive and rapidly expanding global route network.”
Eric Schulz, Airbus Executive Vice President, Chief of Sales, Marketing and Contracts, said, “We welcome Qatar Airways’ choice to launch commercial service of their new A350-1000 to one of the world’s most prominent airports, London Heathrow. This milestone marks a game change in widebody operator economics and long-haul passenger comfort. The A350-1000 features the quietest cabin in its size category and minimise environmental impact with less fuel burn, lower noise and reduced emissions, making it a great neighbour for London citizens."
Chirs Cholerton, Rolls-Royce President Civil Aerospace, said, “We congratulate the entire team at Qatar Airways on being the first to operate the Airbus A350-1000. We are very proud to see our Rolls-Royce Trent XWB-97 engines powering this first flight. They are not only the most powerful engines we have ever produced but they are also the most efficient, delivering the same fuel consumption per passenger as a small family car over the same distance."
Qatar Airways offers six flights a day between Doha and London, providing a fast and frequent connection between the two capital cities. Passengers can also book flights through Qatarairways.com on British Airways’ daily codeshare service between Doha and London. Qatar Airways’ elegant premium lounge at London Heathrow Airport’s Terminal 4 offers a calm and luxurious welcome to passengers flying in First Class and Business Class. Resembling a boutique hotel or private club, it offers traditional Arabic hospitality with a gourmet dining experience, innovative deli-counter, private showers, a comprehensive business centre and comfortable seating areas, separated by olive trees and fountains.
The A350-1000 XWB will offer a total of 327 seats across two cabins, with 46 award-winning Qsuite Business Class seats and 281 18-inch extra wide Economy Class seats. It offers enhanced levels of passenger comfort, thanks to the lowest twin-engine noise level of any aircraft, advanced air conditioning technology and full LED mood lighting.
Later this year, Qatar Airways will launch the first daily direct flights between Doha and Cardiff, UK. From May 1 the new service will provide the Welsh capital with links to the rest of the world via Qatar Airways’ extensive global route network. The flights will help provide new economic, leisure and travel opportunities for Welsh businesses through closer links with the rapidly expanding economies of India, China, Australasia and South East Asia. It will also boost and deepen existing trade and industry links between Qatar and the United Kingdom.
Named the ‘Airline of the Year’ by the prestigious 2017 Skytrax World Airline Awards, Qatar Airways is preparing to launch scores of exciting new destinations in 2018, including Thessaloniki, Greece; and Cardiff, UK, to name just a few.