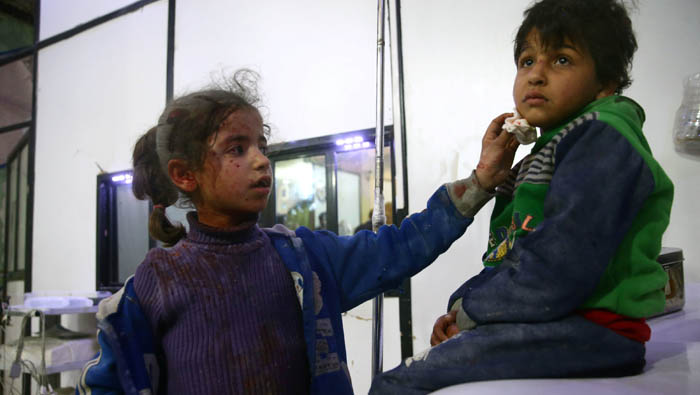 Beirut: Iran said attacks would continue on rebel-held areas near Damascus, where clashes were reported on Sunday between insurgents and government forces despite a UN resolution demanding a 30-day truce across Syria.
Warplanes and artillery hit some towns in the eastern Ghouta enclave, said residents, rescuers, and the Syrian Observatory for Human Rights. The Observatory, a UK-based war monitoring group, said Sunday's bombing was less intense than the attacks over the past week.
Rebels said they clashed with government forces on several frontlines in the early hours of Sunday.
There was no immediate comment from the Syrian military.
Iranian General Mohammad Baqeri, whose government backs Syrian President Bashar Al Assad, said Tehran and Damascus would respect the UN resolution.
But the Iranian military chief of staff also said the truce did not cover parts of the Damascus suburbs "held by the terrorists", the Tasnim news agency said.
Several previous ceasefires have unraveled quickly in the seven-year war in Syria, where Assad's military has gained the upper hand with the help of Iran and Russia, its key allies.
The UN Security Council resolution on Saturday followed seven straight days of bombing by pro-government forces on the besieged eastern suburbs, in one of the deadliest offensives of the war.
The Council voted unanimously to demand the truce to allow for aid access and medical evacuations.
Yet while Moscow supported adopting the resolution, Russian UN Ambassador Vassily Nebenzia cast doubt on its feasibility.
The ceasefire resolution does not include militants from the IS, Al Qaeda, and the Nusra Front.
Baqeri said Iran and Syria would adhere to it.
But "parts of the suburbs of Damascus, which are held by the terrorists, are not covered by the ceasefire and clean-up (operations) will continue there," Tasnim quoted him as saying.
The latest escalation by Damascus and its allies has killed more than 500 people in the enclave over the last week, the Observatory has said.
The dead included more than 120 children.
Air strikes and shelling on Sunday killed four people in eastern Ghouta and injured 27 others, it said.
The Syrian government and Russia deny hitting civilians.
Moscow and Damascus have said they seek to stop mortar attacks by militants injuring dozens in the capital.
The United Nations says nearly 400,000 people live in eastern Ghouta, a pocket of satellite towns and farms under government siege since 2013. It is the only remaining big rebel bastion near Syria's capital.
Jaish al-Islam, one of the two major extremist factions in Ghouta, said fierce battles raged on along several frontlines of Sunday.
Hamza Birqdar, the military spokesman, said the insurgents had thwarted attacks by pro-government forces trying to advance.
Rebels and troops have clashed with each others around the enclave in recent weeks.
Russia said it was counting on foreign supporters of anti-government forces in Syria to ensure that the ceasefire was observed, the foreign ministry said on Sunday.