UK's Labour to back new customs union with EU 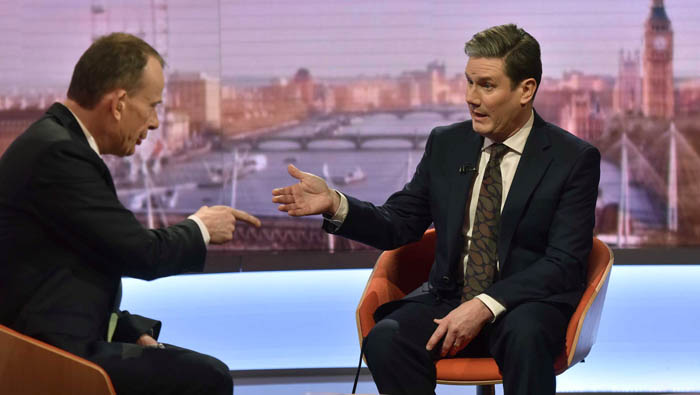 London: Britain's opposition Labour party will back a new customs union with the EU, its Brexit policy chief said - a move that would facilitate trade with the bloc but limit Britain's ability to strike deals with other countries.
Keir Starmer said on Sunday his party had agreed that if it wins power it should negotiate to create a new union with the bloc, and said Conservative Prime Minister Theresa May faced a potential rebellion over her position on the policy.
"Crunch time is now coming for the prime minister because the majority in parliament does not back her approach to a customs union and ...will be heard sooner rather than later," he said.
Starmer's comments, in a BBC television interview, came before a speech by Labour leader Jeremy Corbyn on Monday when he is expected to clarify the party’s position on Brexit.
Hampered by divisions on Brexit within her ruling Conservative Party, which does not hold a parliamentary majority, May hosted an eight-hour meeting of her Brexit war committee on Thursday in an attempt to forge a common position.
One source said she had accepted the argument of those ministers who wanted to diverge more quickly from EU rules and regulations.
Two Conservative members of parliament have backed amendments to a trade bill before parliament that would keep Britain in the customs union.
Starmer hinted on Sunday that his party may support those amendments which have the potential to hand the government a major defeat that would amount to a direct challenge to the prime minister.
"We haven't made a final decision on that. But they are so close to our amendments," he said. Starmer said Labour backed staying in a customs union to preserve trade in its biggest markets after Britain leaves the European Union in March 2019, and because it is the best way of avoiding the return of a hard border on the island of Ireland.
"Obviously it's the only way realistically to get tariff-free access," he said.
"It is really important for our manufacturing base, nobody can answer the question how you keep your commitment to no hard border in Northern Ireland without a customs union," he said.
Britain's next national election is scheduled for 2022.