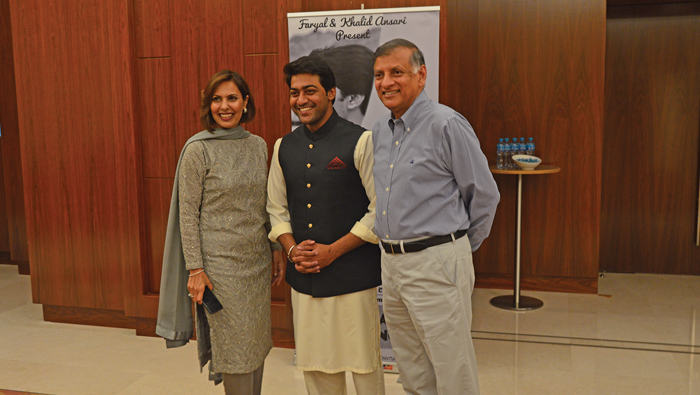 Muscat: Pakistani singing sensation Ali Abbas gave a packed audience a night to remember with a thrilling performance at the Crowne Plaza in Bausher.
Serenading the crowd with a host of folk and sufi classics, the young and dynamic artiste showed viewers in Muscat just why he is rightly regarded as one of South Asia’s biggest musical talents. The private concert was organised by Faryal and Khaled Ansari, with a multinational crowd in attendance. Speaking exclusively to the Times of Oman, Abbas said it was a privilege to be back in the country, following his first concert in the Sultanate last year.
“Audiences here are very knowledgeable and passionate about music. The last time I was in Oman, it unfortunately began to rain during my concert, which was being held in the open. But people didn’t move. They kept urging me to sing. They sat there for 20 minutes in the rain. It was incredible,” he said.
In fact, the passionate audience that evening gave Abbas a well-deserved standing ovation after a non-stop three-hour performance, during which he sang a full repertoire of popular hits.
A singing prodigy from Faisalabad, Abbas rose to fame after appearing on the Indian reality show “Lux Junoon Kuch Kar Dikhane Ka”, in which he won the Special Performance Jury Prize and finished fourth overall. The dynamic vocalist credits legendary Ustadh Mehdi Hassan and Ustadh Ghulam Ali Khan as his biggest inspirations.
“I listened to their music at a time when I still did not know what music was. Their songs touched my heart,” he said. Since his first appearance on Indian TV, Abbas has gone on to release his debut album “Ishq Kamal” and regularly performs in Europe, the Middle East, and the Subcontinent.