At least 45 killed in Somalia blasts 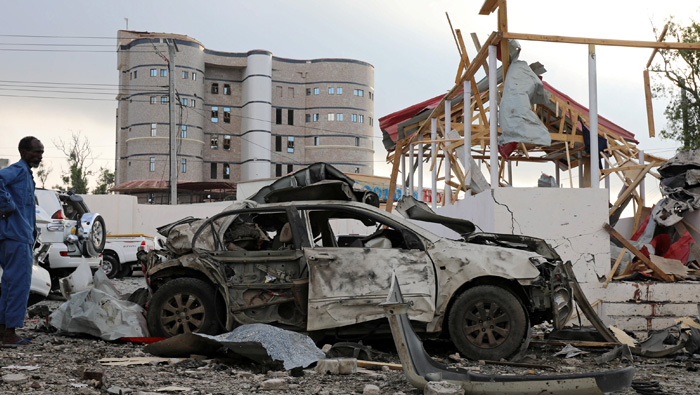 Mogadishu: The death toll from twin car bomb blasts in the Somali capital late on Friday has risen to 45 from the initially reported 18, a senior government official said on Saturday.
Al Qaeda-linked Al Shabaab militants claimed responsibility for the attack near the president's residence and a hotel close by.
"The death toll from last night's blasts has risen to 45, and 36 others were injured," the official, who asked not to be named, told Reuters. Separately, a police officer said he was sure of 36 deaths.
"At least 15 people including a military officer and a local official died outside the palace last night. And more than that were injured.
They were mostly palace guards and guards of officials who were at the scene.
The death toll may rise," Major Mohamed Abdullahi told Reuters on Saturday.
"At the hotel, at least 21 died. So the total I have is 36 dead and more others injured."
The ambulance services had put the toll at 18 on Friday, and updated it to 21 early on Saturday.
Reuters pictures showed at least five vehicles destroyed outside the hotel, whose perimeter wall was partly destroyed in the blast.
Al Shabaab said its attackers had killed 35 soldiers and five of its fighters were also killed.
The group wants to overthrow the Somali government and impose its own laws.
It has killed hundreds of civilians across East Africa and thousands of Somalis in a decade-long insurgency.
In October, more than 500 people were killed in twin bomb blasts in Mogadishu.
Those attacks were the deadliest since Al Shabaab began an insurgency in 2007.
Al Shabaab did not claim responsibility for that incident.