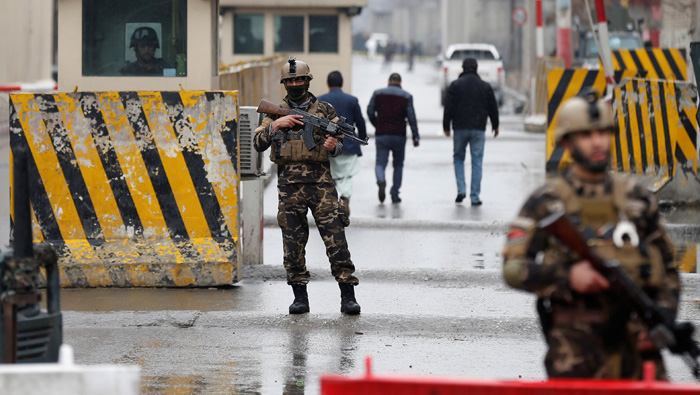 Laskar Gah (Afghanistan): Taliban militants have attacked an Afghan army post and killed 18 government soldiers, the defence ministry said on Saturday, while a suicide bomber in the capital killed one person and wounded six. Violence has intensified in Afghanistan since US President Donald Trump unveiled a more aggressive strategy in August with US-led forces carrying out more air strikes and the Taliban responding with bombs, ambushes and raids. Militants attacked a government army post overnight on Friday in the western province of Farah, a Ministry of Defence spokesman said. "A large number of Taliban attacked an army outpost and we lost 18 soldiers and two were wounded," said the spokesman, Dawlat Waziri. Waziri said he had no more details of the attack. The Taliban claimed responsibility and said two of their fighters were killed. The bomb in Kabul on Saturday was the latest in a spate of attacks in the city in which hundreds of people have been killed and wounded. The capital has been on high alert since a Taliban suicide bomber blew up an explosive-packed ambulance on a busy street on January 27, killing more than 100 people and wounding at least 235. A week earlier, militants killed more than 20 people, including four Americans, in an attack on one of the city's top hotels. The Taliban claimed that attack too. On Saturday, a bomber blew himself up on a road near the headquarters of Afghanistan's NATO-led mission. The identity of the casualties was not known, said Interior Ministry spokesman Najib Danish. IS claimed responsibility in a message on their Amaq news agency. IS' Afghan affiliate, which first appeared near the border with Pakistan in 2015, has become increasingly active and has claimed several recent attacks. The Western-backed government is under growing public pressure to set aside rivalries and improve security. President Ashaf Ghani has approved a new security plan for Kabul but it was not clear what steps could be taken in the city of 5 million people, which already has numerous checkpoints and vehicle restrictions. Also on Saturday, at least one civilian was killed and eight were wounded when a suicide bomber detonated a car-bomb in Lashkar Gah, the capital of the southern province of Helmand, said Omar Zwak, a spokesman for the provincial governor. The Taliban, fighting to drive out foreign troops and re-establish their form of strict Islamic law, claimed responsibility. In another attack in the province, a suicide bomber targeted an Afghan army post killing two soldiers and wounding one, Zwak said.