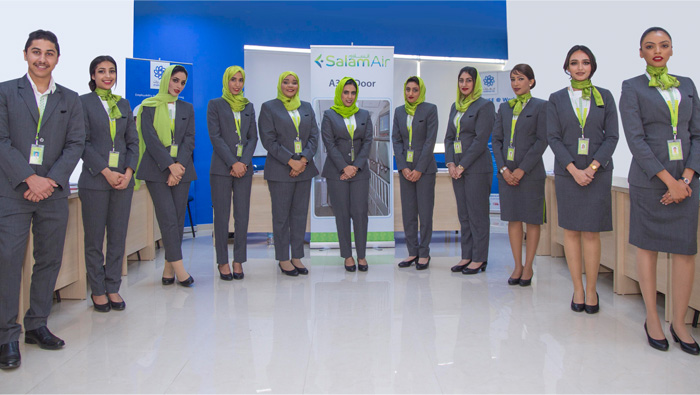 Muscat: As part of its ongoing commitment to empower local talent with promising careers in the aviation industry, SalamAir, Oman’s first budget airline, has recruited a batch of Omani women to join its ranks as cabin crew.
This has followed a nation-wide recruitment campaign, which was advertised on various platforms and had attracted 240 applicants to a two-day orientation session.
Salam Al Kindi, Director of Corporate Support at SalamAir, said: “The aviation sector in Oman continues to show promising growth, especially with the flow of investments to the country’s tourism and transportation sectors, infrastructure, and government-backed projects nearing completion. These factors have created a high demand in the market and opened a window for local Omani talent to enter the aviation sector.”
He added: “Currently, the aviation sector in Oman is male dominated. We at SalamAir have taken the initiative to encourage more Omani women to be involved. As a homegrown airline, we understand the cultural reservations that may impact women pursuing careers as cabin crew. We have, therefore, adapted the traditional role to suit these cultural sensitivities and facilitate the contribution of women in this burgeoning sector.”
“For instance, our flexible selection criteria welcomed both experienced cabin crew, as well as fresh graduates. In addition, we provided our flight attendants with a choice to wear the hijab as part of their official uniform. The long stay of the crew outside the country is normally seen as another setback. But since SalamAir operates only short-to-medium-haul flights, crew members will not be required to stay outside the country for extended periods of time,” he added.
As part of the recruitment process, applicants attended a two-day orientation programme held at the Public Authority of Civil Aviation’s (PACA) headquarters.
The programme included presentations from the SalamAir team, group discussions, assessments, and one-on-one interviews. Successful applicants have now been enrolled into a four-month certified training programme to prepare them to join the cabin crew team after graduation.
Since the start of its operations in January this year, SalamAir has achieved 60 per cent Omanisation rate and operates a 24x7 contact centre with 100 per cent Omani talent. Building on its success, SalamAir aims to increase the number of nationals working with the airline to serve its growing network of destinations.
The airline’s focus is still on increasing connectivity across the region to under-served and popular short- to medium-haul routes, including Muscat, Salalah, Suhar, Dubai, Doha, Jeddah, Karachi, Multan, Sialkot and Shiraz.