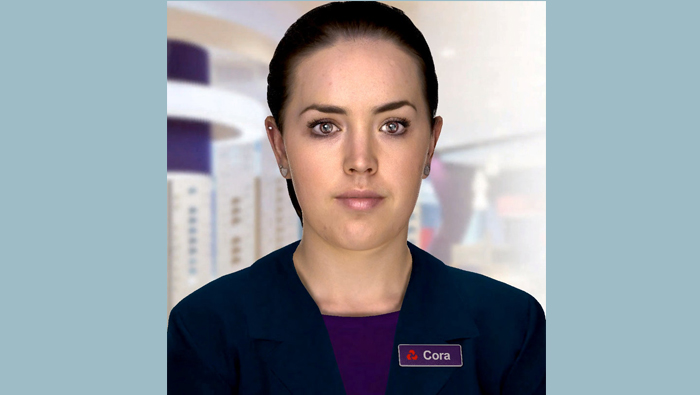 London: A life-like avatar called Cora is being put through her paces by Royal Bank of Scotland, helping customers with basic queries and giving its digital banking drive a more human face.
RBS, which recently axed a quarter of its branches and has announced thousands of job cuts in the past year alone as it reduces costs, will only deploy Cora to NatWest customers if the bank's female avatar passes her probation period.
The digital teller, who wears a NatWest branded uniform and has an ear piercing and sparkling teeth, answers simple questions on getting a mortgage or what to do if a customer loses their card.
"It could create another way for our customers to bank with us on top of the usual services we offer and be used to help answer questions round the clock, whilst cutting queuing times," Kevin Hanley, director of innovation at NatWest, said. Cora, which is undergoing advanced testing as part of a pilot programme at RBS, could even be used to train members of staff, Hanley said on Wednesday.
The RBS experiment is the latest by an industry trying to adapt to changing customer behaviour, rapid technological change and the threat posed by new entrants.
Initiatives range from now-commonplace chatbots or installing tablets in branches to bolder forays into the future, such as robot door staff. Deutsche Bank CEO John Cryan said last year robots could replace 48,000 of the bank's human employees, who were too error-prone and inefficient.
NatWest said its prototype, which can have a two-way verbal conversation with customers via computers, tablets or mobile phones and learn from mistakes, could boost efficiency and provide another channel for customers to get support.
Cora could free up human colleagues to deal with more complex issues, the bank continued, adding that testing has suggested customers who have avoided digital services might be more inclined to interact with a "digital human".