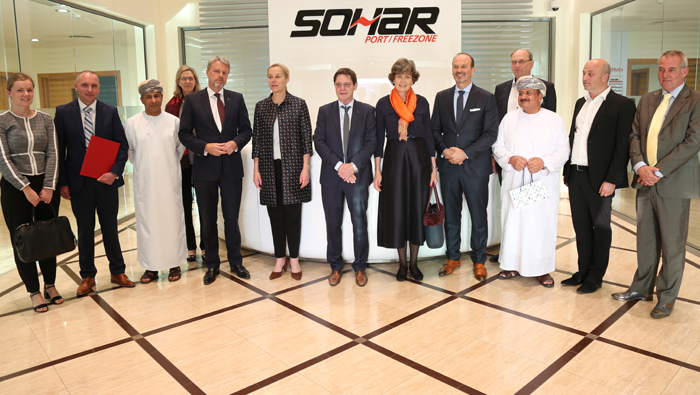 Muscat: A Memorandum of Understanding (MoU) was signed between Sohar Port and Freezone and Netherlands-based Strukton International for the development of a revolutionary waste water treatment plant at the port.
The agreement was signed on the sidelines of the visit of Sigrid Kaag, Minister of Foreign Affairs and Minister for Foreign Trade and Development for the Netherlands, and Laetitia van Asch, Ambassador of the Netherlands to Oman.
The proposed treatment plant uses the new Verdygo modular technology for efficient and environmentally responsible waste water treatment. The new technology allows the treatment plant to rapidly scale operational capacity and deliver sustainable options for waste water reuse for industry or greenhouses, making a considerable reduction in traditional water and energy demands at the port and free zone.
“We have named 2018 as the year of "Smarter Thinking" at Sohar, and our MoU with Strukton International for an innovative waste water treatment plant underlines our commitment to maximise our use of existing resources. There are many examples of smarter thinking at play in Sohar. We’re in the process of installing PV solar cells around our head office, which will significantly reduce the amount of electricity drawn from the power grid. We are also conducting a feasibility study to convert our port vehicles to run on hydrogen, which is an underutilised by-product of the industry at Sohar,” Mark Geilenkirchen, CEO of Sohar Port, said.
Sohar Port and Freezone welcomed Kaag and van Asch, along with a high-level delegation, on Tuesday.
“Sixteen years ago, the Sultanate entered a joint venture agreement for Sohar Port with the Port of Rotterdam. Being one the world's largest ports and the largest one in Europe, the Port of Rotterdam brought state-of-the-art technologies and best practices to Sohar, allowing the port to employ a best practice methodology across all aspects of operations. Today’s visit gave us an opportunity to discuss areas of common interest in water management, logistics, and clean energy, and explore the latest innovative technologies that can be used to ensure environmental sustainability and energy efficiency at Sohar,” Geilenkirchen said.
Impressed with the Sohar Port, Kaag said, “It’s one of the fastest-growing ports in the world. Bigger than Maasvlakte 2, the latest and most extensive area of Rotterdam’s port, Sohar Port is an extraordinary joint venture of the Port of Rotterdam and the Sultanate. As a major industrial hub, it plays a key role in strengthening our countries’ bilateral economic relations. The port and freezone together account for more than 10 per cent of Oman’s GNP, and make a valuable contribution to the further development and diversification of its economy,” he said.
“The enduring relationship between Oman and the Netherlands is symbolised by shared experience and cooperation in maritime and logistics domain between the Ports of Rotterdam and Sohar. Since the start of operations, Sohar has grown to become a cornerstone of the Sultanate's economy, and one of the most fruitful business relationships between the Middle East with the Netherlands. Today, Sohar Port and Freezone is a successful demonstration of the strong and enduring bilateral ties between Oman and the Netherlands,” van Asch said.