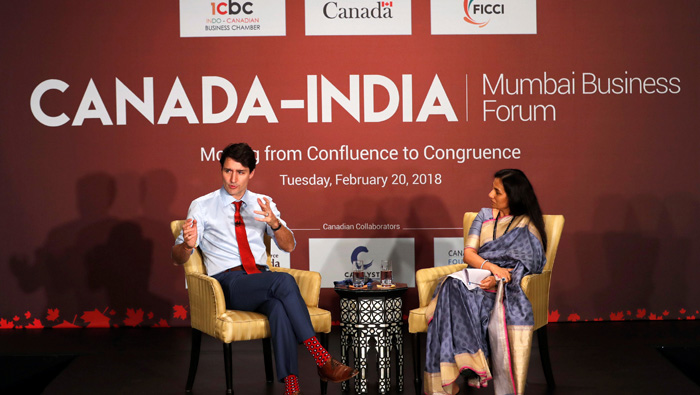 Mumbai: Canadian Prime Minister Justin Trudeau downplayed talk of a snub by the Indian government on his first state visit to the country this week, and cast his trip as being focused on building business and cultural ties and not just political ones.
"We are here in such large number and for so many days for a very simple reason. India matters to Canada," Trudeau told a gathering in Mumbai on Tuesday, where he said his delegation had just inked significant investments in Canada, by Indian tech companies like Tech Mahindra, Infosys and Tata Consultancy Services.
"We welcomed over C$1 billion worth of commercial contracts and agreements," said Trudeau. "This will lead to the creation of more than 5,800 good Canadian jobs." Trudeau's eight-day trip got off to an awkward start after Prime Minister Narendra Modi, who often greets his counterparts on their arrival, sent a junior minister from the agriculture department to meet him at the airport.
By contrast, Modi himself was on the tarmac to greet and bear-hug Israeli Prime Minister Benjamin Netanyahu when he visited last month. Trudeau's lukewarm reception, according to media reports, was due to India's concerns about Trudeau's perceived soft approach to Sikh extremist groups in his country, and those that sympathize with them.
In comments to the media on Monday however, Trudeau strongly rejected suggestions that Canada was encouraging Sikh extremism, saying Canada's position of supporting "one united India" had not changed.
Trudeau, whose 10-day trip to China back in 2016 also caused controversy over its duration and expense, said the India visit was "not just about political ties. It's about deep business and economic ties that Canada will grow."
Trudeau dismissed a question from a reporter on Monday that he had been snubbed by Modi, saying: "I have met with the prime minister in various places around the world and looking forward to sitting down with him on Friday."
On Wednesday, he was to meet the chief minister of the northern Indian state of Punjab who has in the past said he was concerned about Sikh groups in Canada trying to revive an independent state called Khalistan.
The Indian government, which put down an armed Sikh separatist revolt in the 1980s, is sensitive to any attempts to revive the Sikh secessionist movement. Trudeau will be visiting the Golden Temple in Amritsar, the holiest of Sikh shrines, and state chief minister Amarinder Singh said he looked forward to meeting him there. "I'm hopeful that this meeting will help strengthen the close Indo-Canadian business ties as well as the deep-rooted people-to-people relations between our two countries," Singh said in a Twitter post.