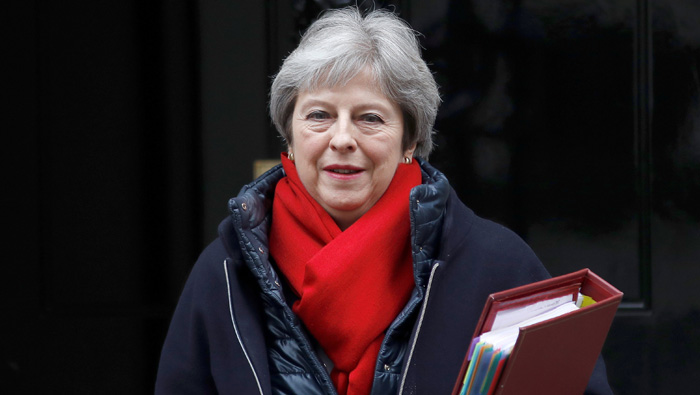 London: More than 60 Conservative lawmakers have written to Theresa May demanding a quick, clean break from the European Union, adding pressure on the prime minister before her ministers meet to decide Britain's negotiating position.
Members of the hard-line European Research Group, a faction in her Conservative Party, wrote the letter days ago and have been adding signatures to bolster demands for Britain to toughen its position in talks to unravel more than 40 years of union.
The letter adds to an increasingly divisive and angry debate over Britain's future relationship with the EU.
Anti-EU campaigners are concerned that those calling for the closest possible ties will force a Brexit in name only.
"It's to strengthen the government's position, because the EU will read the letter," Andrew Bridgen, a Conservative lawmaker and member of the ERG, told Reuters.
Pro-EU and pro-Brexit campaigners often send letters to May to air their views.
But the timing of this letter - circulated widely, and which Bridgen has confirmed - is no surprise.
May will meet her top ministers at her country residence, Chequers, on Thursday.
They will try come up with a final version of her government's approach to possibly the most difficult phase of the negotiations - settling on a transition phase and final agreement.
The group of 62 lawmakers demanded a tougher approach in a number of areas, including "full regulatory autonomy" outside the EU and the ability to start negotiating trade deals "immediately".
They represent less than a fifth of the 316 Conservative members of parliament, but after May lost her parliamentary majority in a snap election last year, she cannot afford to alienate them, and she has been wary of setting out too many details of the government's negotiating position.
The EU wants May to clarify how she sees Britain's future relationship with the bloc.
It is pressing for a status-quo transition period, which Brexit campaigners fear will see Britain subject to new EU laws that could threaten the status of London's financial centre.
They want a veto over any news rules or regulations and the ability to change British laws without authorisation from Brussels from the moment the country formally leaves the EU on March 29 next year.
The EU says Britain cannot undercut tax, labour or other standards and must ensure a level playing field during a transition.
Some Brexit campaigners also want to make sure that a future free-trade agreement is locked in while Britain continues to pay the EU during the transition phase.
The debate will come to a head on Thursday when May will host senior ministers to try to broker an agreement.
She is then expected to set out her plans in a speech in the next couple of weeks, before formal trade talks begin in March.