Lutsenko plans to return to defend Tour of Oman title 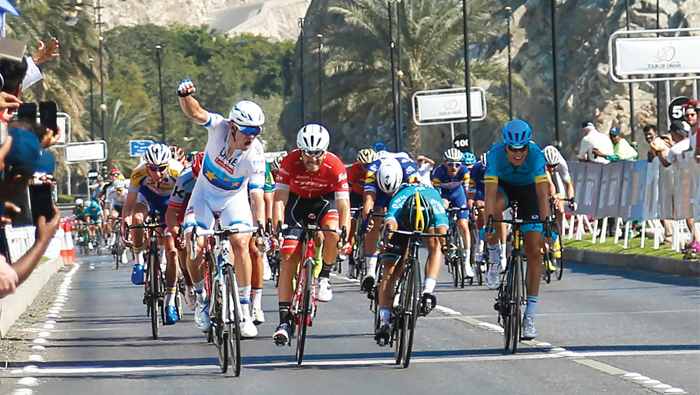 Muscat: The celebrations had not even begun and Alexey Lutsenko, the young Kazakh rider who emerged the overall winner of 2018 Tour of Oman on Sunday, was already talking about returning to the Sultanate to defend the title. Gasping for breath, he spoke to the Times of Oman about his desire to return to the country in 2019 and repeat his performance.
Video: Watch highlights from Stage 6 of the 2018 Tour of Oman
“I am extremely delighted to emerge the winner here. I would like to come back next year and win the Tour of Oman again,” Lutsenko, who also won the Best Young Rider title, said.
Read here: Alexey Lutsenko wins 2018 Tour of Oman
Meanwhile, Kristoff, who won the sixth and final stage of the race for the third consecutive year was equally elated with his hat-trick performance.
“I am extremely happy with the win today. We had a brief meeting this morning and I am glad that everything went according to plan,” he said. At the end of a sixth stage tackled at blazing speed, the European champion dominated the final gallop ahead of stage one victor Bryan Coquard and Giacomo Nizzolo, while clocking in at 3h 11m 29s.
“I know I am not that fast but I am glad that I could pull up some good sprints towards the end. This has given me a boost and I hope to go up another level and race against the champions in the future,” he said.
This has been the third consecutive year for Kristoff winning the final stage at Tour of Oman, but it is his first victory since joining the UAE Team Emirates this season. “I am happy settling down in my new team. Despite knowing that I have not been performing well in the races, I took absolutely no stress,” he said.
It took 7km of battle for the breakaway to shape up with some usual suspects. Kristoff had a relatively calm approach throughout the race, while many were seen concerned. “I am too old to be nervous before the start of a race. Had I been young, the nerves would surely kick in. Of course, no one is happy to lose but that also doesn’t mean the end of the world,” Kristoff remarked.