One small step in Oman... One giant leap for science 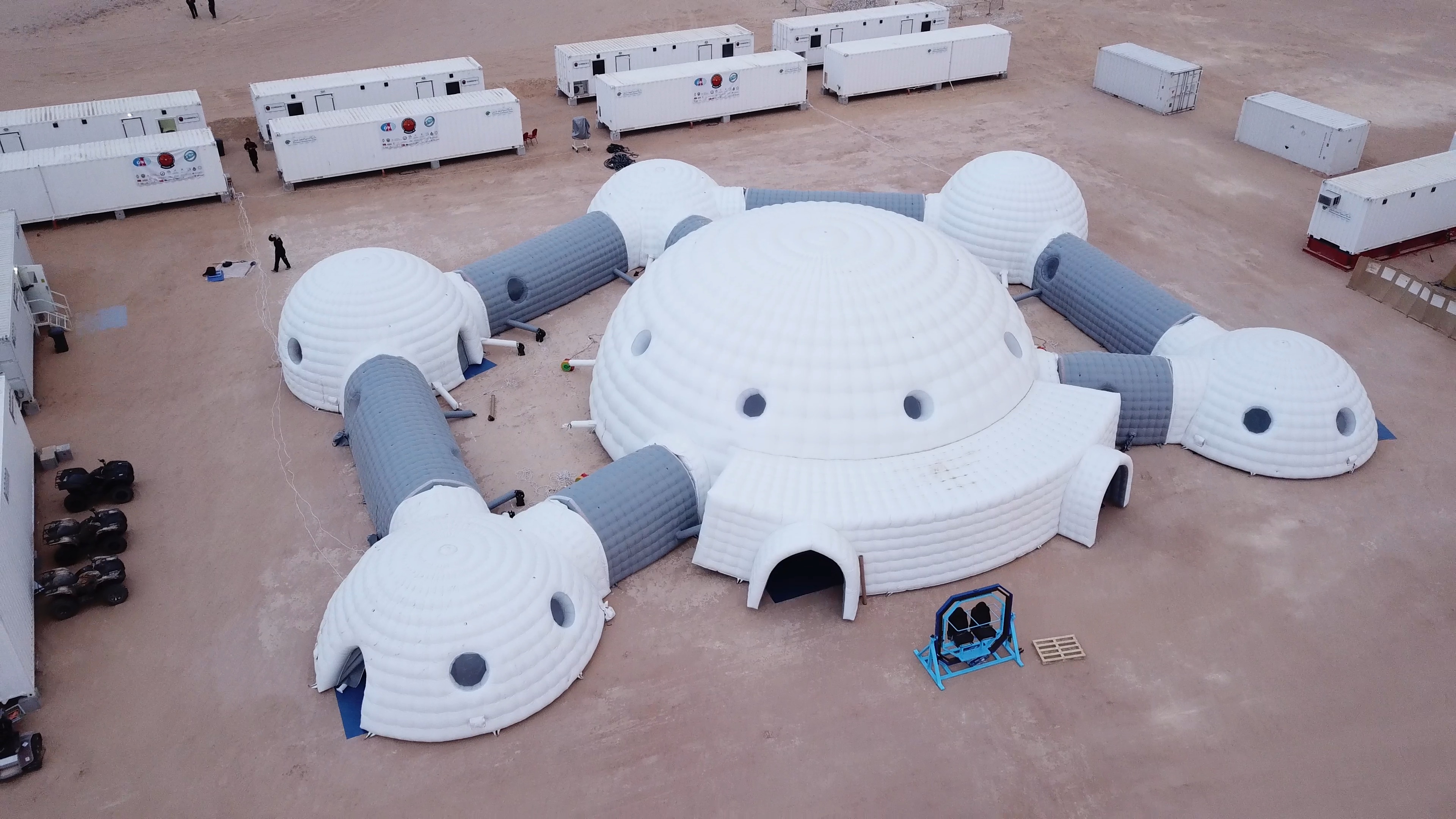 “Why do you have so much dust on your shirt?” asked one of my friends, who had picked me up from Salalah, mere minutes after I had said goodbye to the soldiers on the Royal Oman Army bus that had dropped me off outside Sultan Qaboos Mosque in the Dhofari capital.

“Lay off of him, he has just come from Mars,” said the other. “I doubt he has even had time to enjoy a decent night’s sleep or a good shower. Have have you eaten anything?,” he asked. Food — it seemed such a mundane choice, and after a couple of gruelling, exhausting, but highly educational days spent on ‘Mars’, I was glad to dwell on simpler things back on Earth.

I had returned to Salalah from the base camp of the Austrian Space Forum (the OeWF or Oesterreichiches Weltraum Forum to use their German title), whose scientists had come to Oman as part of AMADEE-18, their Mars simulation mission in Oman, a good 250km from Oman’s southern bastion.
**media[825607]**
“We did a lot of scientific and geophysical studies, all the way from planetary analysis down to a microscopic study of the soil, as had many other researchers, and we had found that Marmul in Oman had a soil composition very similar to that on Mars,” Dr Gernot Gromer, AMADEE-18s Field Commander, had previously told me. “On Earth, there is no location where we can perfectly replicate Mars, so we have to go to wherever we find specific conditions that are like Mars.

“There are only so many things that you can do in a lab, so if you want to do field testing of a vehicle for example, we can only do that in a desert which is like the one we will find on Mars, because it is important that this vehicle continues to function the same way, even after five or six hours without any damage,” he said. “If we want a desert climate, we will come to Oman, if we want to run tests in sub-zero conditions, we would normally go to a place like Antarctica.

“I know it might sound funny to some, but we are actually hoping we fail on this mission,” explained Gromer, as I grew a tad incredulous. “If we make a mistake here, we will know what needs to be done to fix it and we can then avoid it or handle it properly in future. Preparing for the missions we will be taking in the future is possibly the most important part of any plan, and without such meticulous preparation, we are only going to be setting ourselves up for failure.”
**media[825608]**
As I sipped on a refreshing drink and contentedly sat on my chair, letting out an exhausted sigh, I couldn’t help but reflect on just how lucky we are to live among civilisation. Something as readily available as water, stocked on supermarket and canteen shelves was strictly rationed in all its forms at AMADEE-18’s base camp.

“We only take showers once every two days here because water is so scarce here in the desert. We use the navy shower system here, where we turn on the tap for 30 seconds, soap ourselves, and then wash ourselves for another two minutes. We have to conserve water here in the desert, so we take a maximum of just three minutes for a shower,” said Gromer.
But he saved the kicker for the end: “Because you’re here for less than two nights, you won’t be eligible for a shower.”

Water wasn’t the only thing that was scarce. Space was at a premium, too. The main dome – a two tonne inflatable contraption that took mere minutes to inflate – was roomy enough to work in, but the rest of the base wasn’t. I did carry along a sleeping bag, but I didn’t need to use it. Not for the reason I had lugged it along anyway. They had given me and the German TV crew I was sharing my porta cabin with a couple bunk beds, but with temperatures plummeting to single-digit figures at night, and nary a blanket to be found, I had to repurpose my sleeping bag as a makeshift blanket.

Not that it helped: I may have landed in Salalah at 1am, and had gotten little sleep for the night, but the incessant cold allowed just a brief, fitful rest. As I awoke early to finger-numbing cold, chilly winds, and stinging desert sand that forced me to don my sunglasses despite the cloudy, grey early morning skies, I was wondering if breakfast would help warm my spirit (and my body).
**media[825609]**
Dinner had been a humble meal of chicken and potatoes, and breakfast was just as – if not more – simple.

“You can have either bread with cheese, or cornflakes with milk, and we also have bananas and grapefruit,” Olivia Haider of the OeWF told me as I entered the military tent which served as AMADEE-18’s dining room. “Please help yourselves to cereal bars because lunch will only be served at two.”

I however, wasn’t around for it: the nice soldiers who had dropped me off the previous afternoon had come to pick me up, and as we made our way back past the two army checkposts and the Frontier Force Base in Thumrait, I began to once again grow accustomed to the flurry of beeps from my phone, which had once again regained contact with the outside world, now that we had left the camp in Marmul, where a lack of mobile phone data meant we were all but cut off from the outside world.

My accommodations at AMADEE-18’s base camp may have been basic, my meals frugal, my stay far from comfortable, but as my thoughts once again moved to the present, and the piping-hot grilled meats and fresh oven-baked bread in front of me, I couldn’t help but feel grateful for life’s small pleasures.

The educators, scientists, astronauts, and researchers who have sacrificed so much of their time and comfort to come all this way into the desert have willingly decided to trade a safe and secure life for the greater good. One that sees them work night and day to make a manned Mars mission in future a reality.

Because they realise that the needs of the many will always outnumber the needs of the few. And that’s a good thing. — [email protected]
**media[825610]**
AMADEE-18
Oman was chosen as the site for the Austrian Space Forum’s experiments in an atmosphere which was designed to simulate Mars on Earth. The geophysical and biological components of the Dhofari desert near Marmul were considered to be an ideal copy of the surface of Mars.

Some 20 experiments are to be conducted in Oman, with the Mars simulation mission officially beginning on February 8, a week after its bridgehead phase where the scientists check all of their equipment to ensure that all of it is working, before going into isolation for about three weeks. Over 200 scientists from 25 nations will be collaborating on AMADEE-18.

The experiments range from the testing of their new Aouda spacesuit prototype to the setting up of a portable greenhouse on Mars to grow crops for astronauts, and include field tests of rovers that perform several functions, including laser mapping, water detection and moisture location on Mars. A full list of experiments is below:

AMADEE 18 mission patch
A great tradition of any spacefaring mission has been its mission patch, a badge that often reminds those who took part in such missions – and those around them, of just what went into such Herculean efforts behind the scenes. The Austrian Space Forum’s mission is named AMADEE-18, after the famed Austrian composer Wolfgang Amadeus Mozart, with the mission patch reflecting elements from both this earth and beyond. “The mission patch has two sunsets, with the lighter one reflecting the way it looks on Earth and the darker one depicting what it looks like on Mars,” said Dr Gernot Gromer, Field Commander for AMADEE-18.

“This means that although we may be different planets, we are all part of one universe,” he added. “In addition, the lines are representative of Omani architecture, and also pay tribute to all the different experiments and missions that are currently being conducted for man to reach Mars. “They all intersect and reach the centre because it shows that although we may be working independently and on different projects, we all share a common goal and unified dream of one day landing on Mars.”