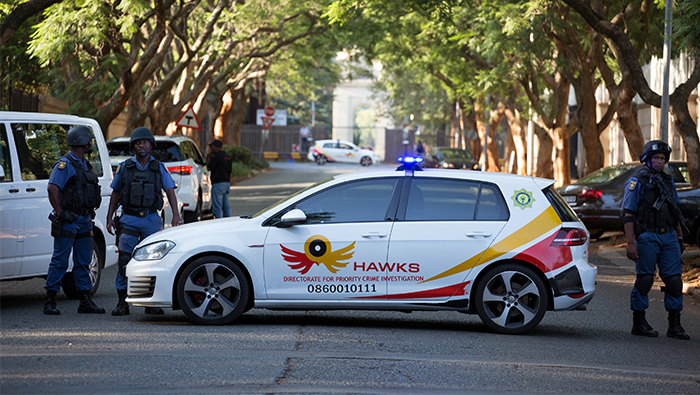 Johannesburg: Heavily armed South African police raided the luxury home of the Gupta family on Wednesday as part of a probe into allegations that the three brothers had corrupt links with President Jacob Zuma, who has been ordered by the ruling ANC to quit as head of state.
The raid, which the state broadcaster said resulted in two arrests including one Gupta family member, came amid reports Zuma was preparing to tell South Africa he was stepping down after nine years in office dogged by scandal and economic stagnation.
Finance Minister Malusi Gigaba said Zuma would speak at 8:00 GMT and satellite trucks were in position at Pretoria's Union Buildings, the seat of the country's government. Zuma's office said there was no "official communication" of any impending address but urged media to wait.
The raid on the Gupta's compound marks a dramatic escalation in the pressure on Zuma and the political faction around him accused of milking state resources for their own ends.
A dozen officers from the elite Hawks police unit sealed off a street leading to the Gupta home in Johannesburg's upscale Saxonwold suburb. One officer blocked access to Reuters, saying: "This is a crime scene."
Minutes later, an unmarked police van left the compound as residents applauded police officers and hurled abuse at security guards for the Guptas, who have been accused by South Africa's top anti-corruption watchdog of influence-peddling and swaying the appointment of cabinet ministers.
"Finally something is being done about it. These guys must get out of our country. They must leave us alone. They have done enough damage," said Tessa Turvey, head of the local residents' association, standing outside.
On Tuesday, the ruling African National Congress (ANC) ordered Zuma to step down as president of the country, giving him no firm deadline but saying the party was sure he would comply and "respond" on Wednesday.
Zuma and the Guptas - a family of wealthy Indian-born businessmen - deny any wrongdoing.
A lawyer for the Gupta family said he could not comment on the raid because he had yet to see the search warrant.
Hawks spokesman Hangwani Mulaudzi said the raid was part of an investigation into allegations of influence peddling. The allegations are also the subject of a judicial inquiry on wider corruption dubbed "state capture" in local media.
"We're not playing around in terms of making sure that those who are responsible in the so-called state capture, they take responsibility for it," Mulaudzi said.
He declined to give details of what was seized or if the business premises of the Guptas, whose commercial empire stretches from mining to media, would also be raided, saying a full statement would be released later.
"Disciplined member"
Signs of law enforcement mobilising against the Guptas - and by association Zuma - caused the rand to strengthen 0.5 per cent against the dollar. The currency has tended to gain ground on any sign of Zuma's political departure approaching.
So far there has been silence from Zuma in response to Tuesday's ANC order, suggesting a power struggle behind the scenes with new party leader Cyril Ramaphosa.
Besides his controversial relationship with the Guptas, Zuma has 783 counts of corruption outstanding against him relating to a multi-billion dollar state arms deal in the late 1990s.
Zuma's spokesman could not be reached for comment.
ANC spokesman Pule Mabe told state broadcaster SABC that Zuma remained "a disciplined member of the ANC and would do what is best for a cadre of the movement".
Besides the pressure from the ANC, Zuma is facing a no-confidence motion in parliament, brought by the opposition Economic Freedom Fighters, set for February 22.
The ANC could throw its weight behind such a vote if Zuma, who has survived several no-confidence motions in the past, refused to resign. The entire Cabinet would have to step down if such a vote went through.