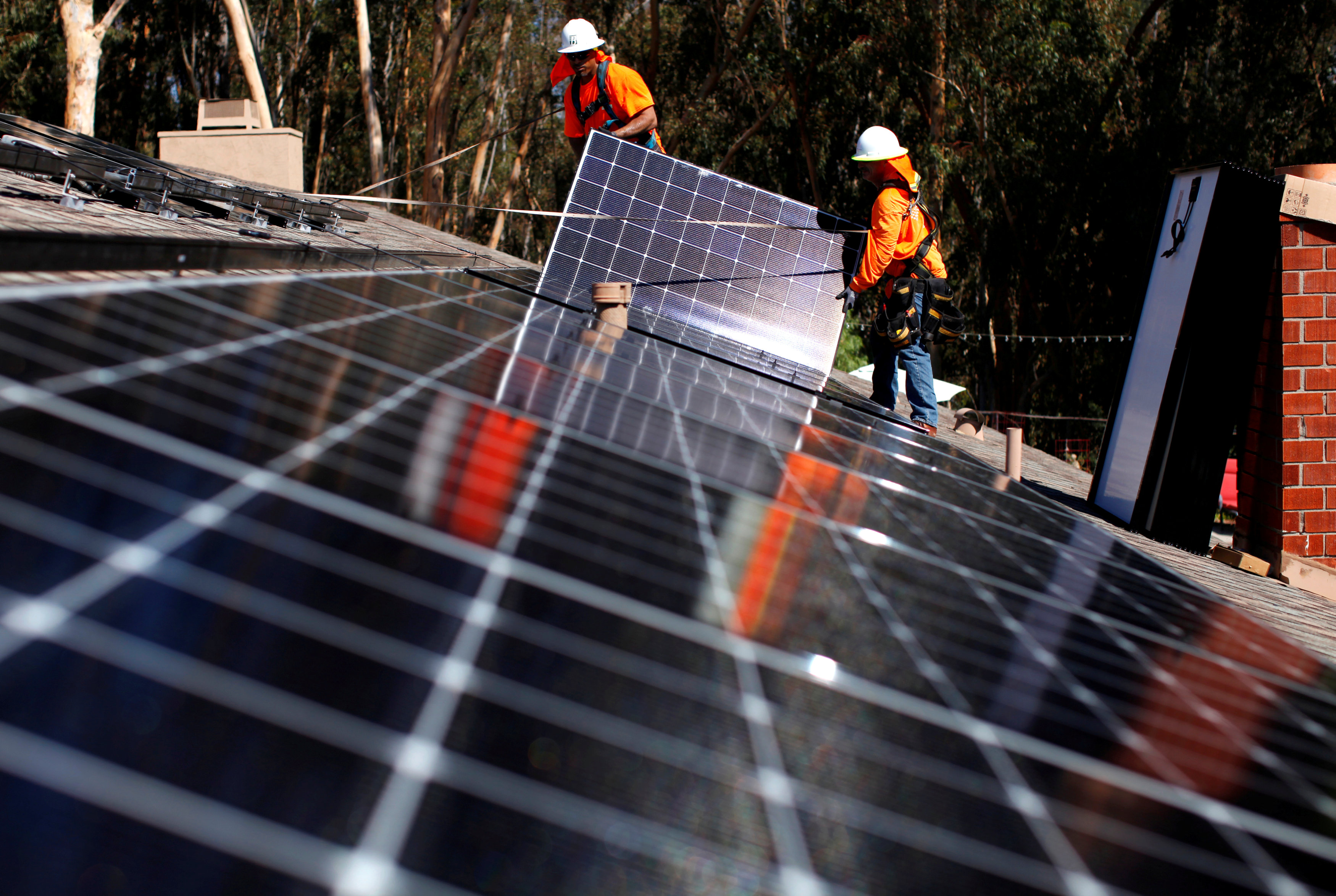 Los Angeles: The United States government doubled its financial support for solar power projects overseas last year under a climate-friendly investment policy written in the last days of the Obama administration, according to a Reuters review of government documents.
The growing US support for foreign solar projects comes despite an ongoing federal investigation into past US solar loans abroad. It also deepens confusion about President Donald Trump’s position on government support for renewable energy as his administration downplays the global warming threat and aggressively promotes fossil-fuel development.
The Overseas Private Investment Corporation (OPIC), the government’s international finance institution, loaned more than $630 million to foreign energy projects in 2017, 90 per cent of which were solar, wind, or other low-carbon ventures, according to investment documents.
That compares to $797 million in total OPIC energy financing in 2016, 61 per cent of which went to clean energy.
The agency’s lending to solar projects doubled to more than $250 million in 2017, supporting ventures in India, Africa and Latin America, according to the records.
White House spokeswoman Kelly Love did not respond to requests for comment.
OPIC is a self-funded government agency whose website says it aims to advance "US foreign policy and national security priorities” by investing in ventures abroad. For 40 years, it has operated at no net cost to US tax payers.
The agency formalised its preference for climate-friendly energy in an environmental and social policy statement adopted days before Trump's inauguration. The document says the agency aims to support reduction of greenhouse gas emissions and promote low- and no-carbon fuels and technologies, efficiency and conservation.
That dovetails with former President Barack Obama’s effort to fight climate change but clashes with the current administration’s energy priorities.
Since taking office, Trump has rolled back regulation limiting carbon dioxide emissions to help coal and oil firms; signed an executive order requiring government agencies to reduce the influence of climate considerations in decisions; and announced the withdrawal of the United States from an international pact to combat global warming.
That might seem to suggest the administration would oppose continuing generous government support for solar — a leading climate-friendly competitor to fossil fuels — but the administration has never made that clear.
Trump has never proposed repealing the billions of dollars worth of federal incentives for renewable energy, which were preserved by a Republican-controlled Congress in December tax legislation. But Trump has expressed skepticism about the viability of solar and wind, calling both "very, very expensive."
In January, Trump slapped tariffs on solar panel imports, saying the move would help domestic manufacturers. But what helps manufacturers may hurt solar installers that have relied on lower-cost imported panels, often from China.
OPIC spokeswoman Andrea Orr said the agency adheres to the Obama-enacted low-carbon policy and that its portfolio is "demand driven" - reflecting the shift globally toward lower carbon energy sources.
But policy "does not prohibit OPIC from considering the full spectrum of energy projects," she said, including in impoverished nations where fossil fuels are the most feasible option. OPIC’s financing last year, for example, included $50 million for a power plant in the West African nation of Guinea that will run on fuel oil.
Last year, Trump sought to eliminate OPIC as part of his 2018 budget proposal "to reduce unnecessary federal interventions that distort the free market” — but Congress rejected the idea.
Trump has since appointed Texas businessman Ray Washburne to lead the agency. Washburne has said he would focus OPIC on two goals: empowering women in the developing world, and serving US strategic national security interests.
Washburne was not available for an interview, Orr said.
'No fundamental change'
Renewable energy projects that received OPIC funding last year include a Honduras geothermal plant sponsored by Ormat Technologies, a solar array in Zambia backed by First Solar and solar facilities in Jordan and El Salvador by power plant owner AES Corp.
Orb Energy, an Indian solar company backed by US venture capital fund Acumen Fund, secured $10 million in OPIC financing last year for commercial rooftop projects. Such funding would not be available from India's conservative banking sector, the company said.
"Donald Trump does not go out of his way to support solar or renewables, so we were concerned," Orb Chief Executive Damian Miller said in an interview.
But he was told there was "no fundamental change" in its priorities for selecting projects, he said.
Since 2011, more than three quarters of energy generation projects that have received OPIC funding were for solar, wind or other non-hydroelectric forms of renewable power.
That approach has been a boon for renewable energy developers, but has not always gone well for OPIC: the agency is currently under investigation by a federal watchdog over nearly $1 billion of loans to solar farms and a hydroelectric project in Chile that got into financial trouble when power prices in that nation plummeted.
At issue is whether OPIC properly stress-tested the projects adequately before offering loans. The agency’s losses on the deals could exceed $160 million, sources told Reuters last year. OPIC has said it is confident it will recover the loans over the coming decades.
AES — which received up to $89.5 million for its projects in Jordan and El Salvador in 2017 — said it has tapped OPIC financing for more than a decade. The shift in the priorities matches the evolution over time at AES, which now invests more in renewable energy and natural gas and less in oil and coal.
"That's the angle that the company has taken," AES Treasurer Daniel Stadelmann said in an interview, referring to the company's shift toward cleaner energy sources. "So it matches."