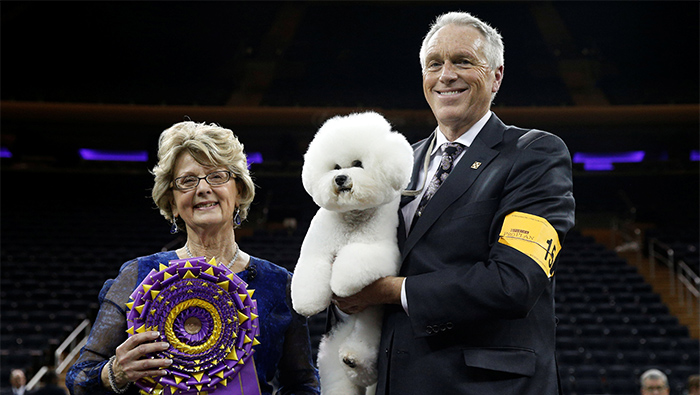 New York: A bichon frise named Flynn was crowned "best in show" at the 142nd Westminster Kennel Club Dog Show on Tuesday, wagging his tail to triumph over nearly 3,000 dogs entered in the world-renowned contest for pure-bred canines.
The diminutive, fluffy white winner edged out six other finalists, including the No. 2 "reserve best in show," a giant schnauzer named Ty, at the end of the annual two-day event at Madison Square Garden in New York City's midtown Manhattan.
"Every time I looked at him, he went, 'Hey, lady.' A little waggly tail looking up at me, and he sold himself," judge Betty-Anne Stenmark said after announcing the winner.
The remaining five finalists selected over two days as top dogs in their respective canine categories were a borzoi, a pug, a border collie, a Sussex spaniel and a Norfolk terrier.
More than 2,880 dogs representing 201 breeds and varieties competed in this year's Westminster Kennel Club contest, touted by organisers as America's second-oldest sporting event after the Kentucky Derby.
The victor receives the coveted Best in Show trophy, a media tour and the lure of higher breeding fees - all rewards for the winner's patience while enduring seemingly endless blow dryer blasts and tugs from combs and brushes.
For the victorious bichon frise, it was all in a day's work.
"He likes getting groomed," said Flynn's handler, Bill McFadden from California.
Recognised for its fluffy white coat and baby-doll face, with charcoal-colored eyes and nose, the bichon frise is known for its perky, good-natured disposition. The breed name is derived from the French phrase meaning "curly lap dog."
"These dogs were bred to entertain people. They’re circus dogs, so they’re very smart. They have beguiling eyes that all they have to do is a slight raise of an eyebrow and they can make you laugh or chuckle at least,” McFadden said.
The bichon frise breed has won Best in Show just once before, in 2001, according to Westminster Kennel Club data going back to 1907.
Wire fox terriers have proven the most frequent winners at Westminster, having clinched the top prize a record 14 times.
Dogs in the Westminster show compete in a total of seven groups. Flynn represented the non-sporting category.
The other groups consisted of hounds, terriers, toy, herding, working and sporting dogs, each judged by characteristics specific to their breeds.
Dogs joined this year's contest from all 50 U.S. states and 16 other countries, including Canada, Mexico, Japan, Russia, Australia and China, the Westminster Kennel Club said in a statement.
A female German shepherd named Rumour was named Best in Show at last year's competition.