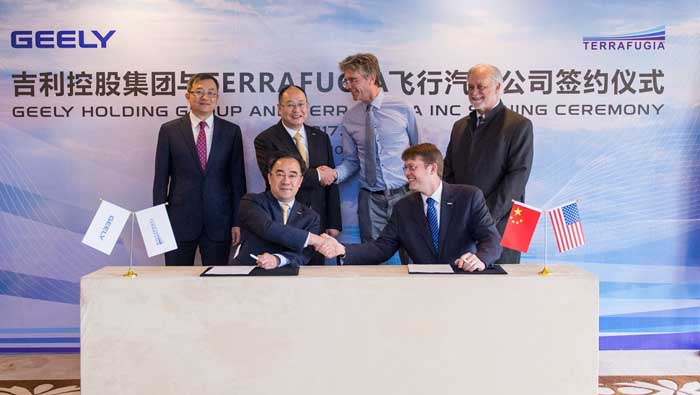 Muscat: Striving towards its vision of innovation, Zhejiang Geely Holding Group (‘Geely Holding’) entered into an agreement with Terrafugia Inc, a US-based company focused on future technologies, to roll out its first flying car.
Flying cars will help reduce the number of vehicles on the roads and will ease traffic congestion in cities.
Terrafugia released a prototype of its two-person aerial vehicle, the Transition, in 2013. The limited series flying car will be commercially available in 2019. The Transition, designed to fly like a typical Light Sport Aircraft in the air and drive as a typical car on the ground, is a folding-wing, two-seat aircraft, which alters between flight and drive modes in seconds.
The TF-X, the world’s first vertical take-off and landing (VTOL) four-seat flying car will be made available by 2023 and will revolutionise transportation. An all-electric vehicle with a computer-controlled flight, the TF-X is the flying car of the future.
In Oman, Geely Holding Group is represented by Towell Auto Centre (TAC), the sole distributor of Geely cars that believes in always giving something new to its customers.
A spokesperson for Towell Auto Centre (TAC) said, “Geely Holding Group believes in continuous innovation and Geely customers here in Oman stand to gain. Earlier customers benefitted from the modern aerodynamic styling and safety through the acquisition of Volvo cars and its design chief, Peter Horbury, joining Geely. As the owner of The London Taxi Company, Geely brings the technology of the iconic black cab to the table. Then in late 2017, Geely acquired the Lotus and Proton brands. Now customers will continue to benefit from the pioneering new technology of Terrafugia which has been taken over by Geely.”
With a network of 10 showrooms, 2 service outlets and 10 parts outlets with 98% availability spread across Oman, Towell Auto Centre is one of the leading automobile distributors in Oman.