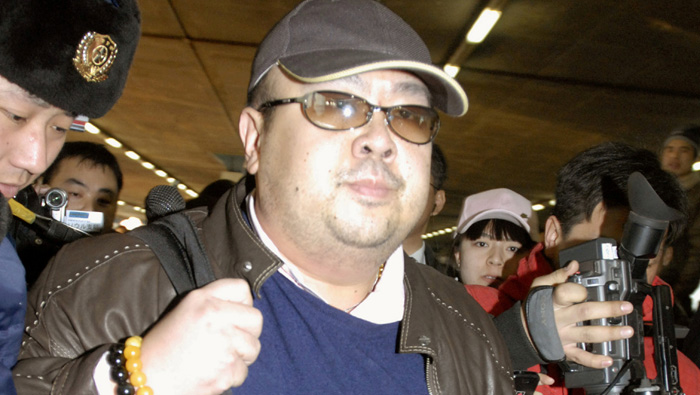 Kuala Lumpur: One year after North Korean leader Kim Jong Un's half-brother was assassinated at Kuala Lumpur's airport, Malaysia is further downgrading once-close ties with Pyongyang, sources familiar with the government's plans said.
Kim Jong Nam was assassinated on February 13, 2017 when two women smeared his face with VX nerve agent - which the UN lists as a weapon of mass destruction.
The women claim they were tricked into believing they were part of a reality show, but US and South Korea say the murder was orchestrated by Pyongyang.
The brazen killing came as North Korea was starting to accelerate its missile tests and countries around the world came under mounting pressure to enforce ever-tightening UN sanctions against Pyongyang.
The repercussions from the killing are still being felt.
Malaysia is considering reducing the staff size of the North Korean mission in Kuala Lumpur to four by not renewing requests to replace diplomats when their terms end, according to a diplomatic source and an advisor to the government.
Both declined to be named due to the sensitivity of the matter.
Malaysia is also turning down invitations to participate in North Korean events.
A diplomatic source with direct knowledge of the situation said Malaysia declined an invitation to send an envoy to attend last week's military parade in Pyongyang.
"It's just too dangerous," the source told Reuters, referring to the Malaysian diplomats North Korea stopped from leaving the country last year. The Malaysian foreign ministry declined to comment.
Meanwhile, trade and business ties have all but dried up.
A Malaysian businessman, who until recently imported coal from North Korea, said he stopped buying from Pyongyang - even before UN sanctions that banned all trade of North Korean coal - because the purchases were drawing a lot of attention after the Kim Jong Nam killing. Ties quickly deteriorated after North Korea's ambassador to Malaysia questioned the credibility of the police investigation into the assassination, insisting Kim Jong Nam was an ordinary citizen who had died of a heart attack.
Malaysia recalled its ambassador to North Korea, banned its citizens from travelling to the North and cancelled visa-free entry for North Koreans.
North Korea retaliated with a travel ban on all Malaysians in Pyongyang, trapping three diplomats and six family members.
They were able to fly out only after Malaysia agreed to hand over Kim Jong Nam's corpse and send three North Koreans wanted for questioning back to North Korea.
Pressure from the United States has been mounting on Malaysia and other Southeast Asian countries to cut trade and diplomatic ties with Pyongyang, as President Donald Trump seeks support for tougher action against nuclear-armed North Korea.
Malaysia said last year it was considering permanently closing its embassy in Pyongyang and moving North Korea services to its Beijing mission.
It has not been staffed since last April after its diplomats were allowed to leave under the swap agreement.
The cabinet has yet to make a decision on closing the embassy.
"There's no turning back the clock on relations with North Korea, not after the Kim Jong Nam incident and the near impossibility of having any positive relationship with the country under such severe sanctions," said Shahriman Lockman, a senior analyst with the Institute of Strategic and International Studies.
"I think the sense is that North Korea took advantage of Malaysia's goodwill and relative openness," he said.
North Korea benefited from its Malaysian ties -- Pyongyang exported everything from coal and medical devices to crabs, cloth hangers and fire extinguishers to Malaysia.
Imports, however, came to a grinding halt last year.
Malaysia was also host to hundreds of North Korean workers, who were sent back after the airport killing.
A Reuters report showed how North Korea's spy agency, the Reconnaissance Bureau, was running an arms operation out of Kuala Lumpur. The frayed ties have affected Malaysian businesses that used to trade with the isolated country.
"We have been doing business with North Korea for 10 years," said the Malaysian coal trader who declined to be identified.
"Suddenly it became a big issue because of the murder," said the trader, adding he was questioned by the police and the foreign ministry over a March purchase.
It's a sharp contrast from 10 years ago when it was easy for Malaysian businessmen to engage with Pyongyang, he said.
"I met the (North Korean) trade attaché and he arranged a shipment for me. That's how I started," he said.
The rocky relationship also remains in the spotlight with the continuing trial of the two women, Indonesian Siti Aisyah and Doan Thi Huong from Vietnam, in a Kuala Lumpur court on charges of murdering Kim Jong Nam.
The prosecution has built its case on airport video recordings of the killing and VX residue found on the women.
Defence lawyers say the prosecution has not put forward a motive for the killing and argue the two women were merely unwitting pawns in the attack.
The prosecution is not expected to finish presenting evidence until next month.
The women face the death penalty if convicted.