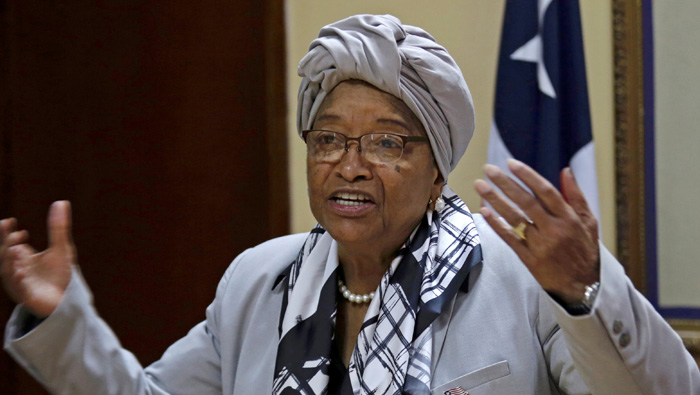 Monrovia: Former Liberian president Ellen Johnson Sirleaf has won the 2017 Mo Ibrahim award, designed to improve the quality of African political leadership, after handing over power in her country's first peaceful democratic transition in seven decades.
Johnson Sirleaf, a Nobel Peace Prize laureate and Africa's first elected female head of state, stepped down as president of the war-scarred West African state last month, making way for ex-international soccer star George Weah.
In recent years, the Ibrahim Prize for Achievement in African Leadership, founded by Sudanese telecoms tycoon Mo Ibrahim, has gained notoriety for not being awarded for lack of a suitable candidate.
Johnson Sirleaf, a former World Bank and United Nations official, is only the fifth person to win the 10-year-old award.
The Mo Ibrahim Foundation praised Johnson Sirleaf for her "exceptional and transformative leadership" in helping steer Liberia's recovery from many years of civil war.
"In very difficult circumstances, she helped guide her nation towards a peaceful and democratic future, paving the way for her successor to follow," Mo Ibrahim said.
"I hope Ellen Johnson Sirleaf will continue to inspire women in Africa and beyond."
Candidates for the award have to be democratically elected African heads of state or government who have left office during the previous three years at the end of their mandated terms.
Johnson Sirleaf was travelling abroad on Monday and could not immediately be reached to comment on the prize.
"This new award puts the icing on the cake for Ellen," said Nora King, 27, a student in the capital Monrovia.
"She has been a good example for women's leadership around the world. Some people don't really realise what she did for Liberia."
The prize is $5 million paid out over 10 years, with another $200,000 annually throughout the winner's lifetime.
Founded by freed American slaves, Liberia is Africa's oldest modern republic.
But it has been plagued by years of unrest and bloodshed, including two civil wars notorious for their brutality and use of child soldiers.
Johnson Sirleaf took on the leadership of Liberia at a time when it was still seeking to heal deep divisions and rebuild infrastructure.
Her administration then faced a global commodities crash that crippled its nascent mining industry followed by the deadliest Ebola epidemic in history.
Despite praise for her role in shoring up peace, she was criticised for failing to tackle corruption or do much to lift ordinary Liberians out of poverty. Weah rode a wave of dissatisfaction with her administration to a landslide victory over her vice-president Joseph Boakai in a December run-off election.
Johnson Sirleaf was barred from seeking re-election by a constitutional term limit.
"The country is broke, the economy is poor like many Liberians, and corruption and reconciliation are still issues after 12 years of her leadership," said Monrovia resident James Ballah, 36.
"These institutions always reward the wrong people."