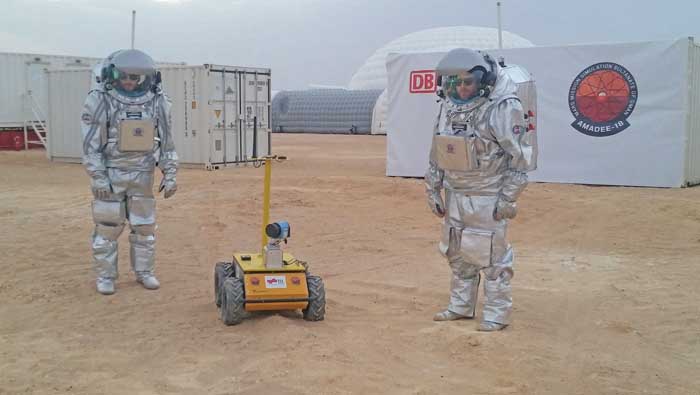 Marmul: Officially, it’s 17 degrees at the base camp of the Austrian Space Forum’s Mars simulation mission in the Dhofari desert of Oman, but the chilly winds whipping the faces of the astronauts make it feel a lot colder.
That’s not the only reason they have balaclavas on; the ceaseless winds carry with them the sting of thousands of particles of fine desert sand, forcing the astronauts to don sunglasses despite the increasingly cloudy skies. The surface temperature on Mars is about minus 55 degrees in summer, and as far as simulations go, they could be doing a lot worse.
**media[820092]**
The Austrian Space Forum (OeWF or Oesterreichiches Weltraum Forum) arrived in Oman in early February as part of AMADEE 18, with an aim to conduct a series of more than 20 experiments that would serve as a litmus test for how successful they will be on Mars.
The Times of Oman was invited to the base camp in the desert on the outskirts of Marmul, some 250km from the Dhofari capital of Salalah, an area so remote that there is little cell phone coverage. The AMADEE 18 base camp is guarded closely by soldiers and vehicle-mounted machine gunners from the Oman Royal Army. Also, the Royal Air Force Oman base in Thumrait is on standby in case an emergency airlift is needed.
It was soon revealed that not just scientific discipline is required at the base camp. The fact is that all these scientists are in a camp in the middle of a desert and they will need to live a strictly regimented life for the next month or so.
Camp life begins at 7am, barely a few hours after the scientists have hunkered down, tightly wrapped in their sleeping bags to keep out the biting cold, negating the need for air conditioners in their two-man porta cabins.
The bleary-eyed scientists, still shaking off the last vestiges of sleep, head for the rota sheet that’s been drawn up the previous night. Everyone has to pitch in to ensure that life at the base camp runs smoothly.
While some grab brooms and brushes to give everything a good scrubbing, including toilets, others head to the showers, if it is their turn. Water is scarce so scientists are allowed to take three-minute showers every two days. They get 30 seconds of water to wet themselves, followed by a couple of minutes of water to rinse off.
Then, it’s off to the field kitchen to make breakfast for all scientists and visitors, a fair number of whom are expected everyday. Kitchen shifts occur three times a day, with the quartermaster overseeing what provisions need to be finished first.
The “dining room”, a robust canvas tent with a couple of fridges, steel shelves, and camp tables, is home to a large stash of canned vegetables, Tetra pack juices and tinned meat, as well as many other staples such as pasta, crackers and cereal bars. It’s enough to feed a small battalion. Fresh food is trucked in from Salalah, but scientists know it wouldn’t take much for them to be cut off from the outside world.
“All of us have to take turns to ensure the camp is fully stocked because this is an isolated location and we cannot afford to fall short of essential items in case of an emergency,” Aline Decadi, project engineer for AMADEE 18, said.
“We have to monitor our food supplies and take turns cooking. Whenever someone takes a vehicle outside the camp, they have to inform us where they are going and how much fuel is left in the car,” she added.
“I know it is not ideal for some people, but we chose Marmul because the terrain here is very similar to that of Mars and we wanted to go off the grid so we could focus solely on the experiments. We wanted to replicate the exact facilities we would have on Mars, so that means no mobile phone or GPS systems,” Gernot Gromer, Field Commander for AMADEE 18, said.
“We narrowed it down to Oman from a number of countries, because satellite studies and geophysical publications have shown that the soil composition of Oman and the mineralogy of the desert here is very similar to that of Mars,” he added.
The researchers are connected to the outside world through short-wave radios, with a high-speed Internet connection linking them to the Mission Control Centre at OeWF headquarters in Innsbruck. Another team in Canada monitors and receives feedback from its colleagues on the ground, while a three-man team of doctors, who also doubles up as researchers for the mission, is always on the base, ready to spring into action in case of an emergency.
Tests will be conducted on a host of prototypes, including the Aouda space exploration spacesuit, the Husky rover that uses laser guidance for surface mapping, sonic exploration radar devices, a mobile greenhouse to check the effectiveness of crop productivity on Mars,
and a fatigue and tension monitoring system, among others. The scientists will go into isolation from February 8 so they can pay full attention to their experiments until the end of the month.
“We began shipping our equipment to Oman in December. Then all of us who were coming here had to undergo training in Innsbruck during the last week of January,” Michael Muller, another specialist at OeWF, said.
“This is our bridgehead phase. Once we have seen that all our equipment works, we will be in isolation until the end of February,” he added.