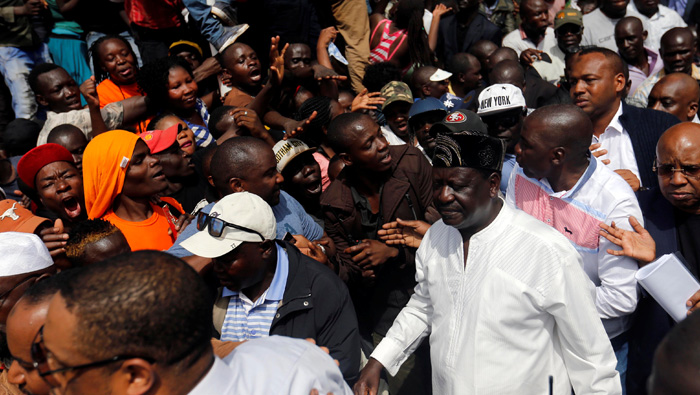 Nairobi: Kenyan police on Saturday briefly detained a third opposition legislator who attended a symbolic "swearing-in" of opposition leader Raila Odinga that was a direct challenge to President Uhuru Kenyatta, who won re-election in October.
The government has made several arrests and suspended three television channels that had planned to stream Tuesday's event.
George Aladwa, a member of Odinga's National Resistance Movement, was detained by police in the capital Nairobi, his lawyer Nelson Havi told Reuters.
"He was interrogated in connection with the oath taken by Kenyan main opposition leader Raila Odinga as the people's president," he said. Aladwa, who denied any wrongdoing, was ordered to report back on Tuesday, Havi added.
A police spokesman said he was not aware of his detention.
The arrest follows that of opposition politician Miguna Miguna, who was detained in a dawn raid on his Nairobi home on Friday and that of another opposition leader a day earlier.
Miguna was released on bail of 50,000 Kenyan shillings ($500).
Miguna stood beside Odinga at Tuesday's rally and declared himself the "general" of Odinga's National Resistance Movement, which authorities have designated a "criminal group" because of its stated intent to establish a parallel government.
Kenya's ban on three private television stations defied a court order to lift the move.
The media crackdown has been criticised by the United Nations and the United States.
The arrests and broadcast bans have shocked many Kenyans used to a freewheeling media and irreverent political culture that has taken root since 2002.