India's budget focuses on rural economy ahead of elections 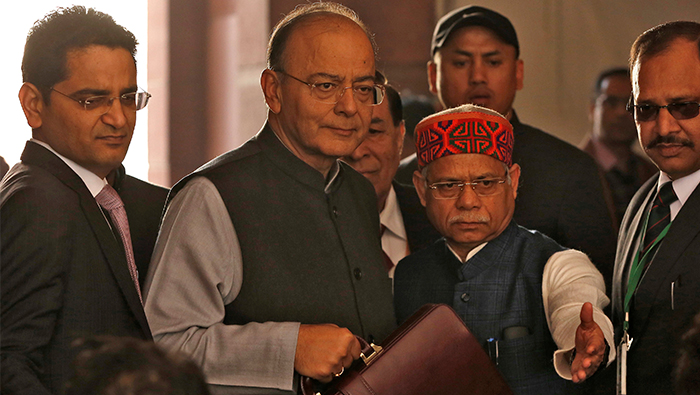 New Delhi: India said on Thursday it expected economic growth to surge above 8 per cent as it announced a 2018/19 budget that allocated billions of dollars for rural infrastructure and unveiled a health insurance programme for around 500 million poor.
In his last full year budget before a national election that must be held by May 2019, Finance Minister Arun Jaitley spoke of massive spending on rural infrastructure, to win over voters in the countryside where two-thirds of India's 1.3 billion people live.
Here are the highlights of Jaitley's budget for the year starting April 1.
Fiscal deficit
* Fiscal deficit for 2017/18 seen at 3.5 per cent of GDP.
* Fiscal deficit for 2018/19 seen at 3.3 pct of GDP.
* To use fiscal deficit target as key operational parameter for fiscal consolidation growth.
* Estimates 7.2 to 7.5 per cent GDP growth in second half of current fiscal year.
* Finance minister says "firmly on path to achieve 8 per cent plus growth soon".
Expenditure
* Revised expenditure for 2017/18 at 21.57 trillion rupees.
* Total expenditure for 2018/19 seen at 24.42 trillion rupees.
* Estimates 1.38 trillion rupees expenditure on health, education and social security.
* Railway capital expenditure set at 1.49 trillion rupees for 2018/19
Taxation
* To reduce corporate tax to 25 per cent for companies who report turnover of up to 2.5 billion rupees as of 2016/17.
* No change in structure of income tax rates for individuals, allows standard deductions of 40,000 rupees for salaried employees in lieu of transport allowance and miscellaneous medical expenses.
* Senior citizens get higher exemptions on incomes from interest on bank deposits, health insurance premium.
* Proposes bringing in long-term capital gains tax on listed equities.
* Long-term capital gains exceeding 100,000 rupees to be taxed at 10 per cent.
* Proposes to raise import tax on mobile phones to 20 per cent from 15 per cent, on some of their parts and accessories to 15 per cent and certain TV parts to 15 per cent
* To raise health and education cess to 4 per cent from 3 per cent.
Borrowing
* Gross market borrowing seen at 6.06 trillion rupees in 2018/19.
* Net market borrowing seen at 4.62 trillion rupees in 2018/19.
* Government to switch 280.6 billion rupees of bonds in 2018/19
Infrastructure
* To spend 14.34 trillion rupees ($225.50 billion) on rural infrastructure.
Banking/finance
* To soon announce measures to address bad loans of small and medium enterprises.
* Proposes setting up 3 trillion rupees target for lending for small enterprises.
* Reserve Bank of India Act being amended to provide the central bank with leeway to manage excess liquidity.
* To allow strong regional rural banks to raise capital from the market to help increase credit to rural economy.
* Does not consider crypto-currencies legal tender, will take all measures to eliminate use of crypto assets as part of payment system.
Divestment/Consolidation
* To merge three government-owned non-life insurers, National Insurance Co, United India Assurance Co and Oriental India Insurance Co, into a single entity and list subsequently
* Finance minister says divestment target for 2017/18 has been exceeded, to get 1 trillion rupees.
* Divestment target for 2018/19 set at 800 billion rupees.
* Has begun process of strategic sale in 24 state-run cos including privatisation of Air India; to come up with more exchange-traded fund offers including debt ETFs.
Agriculture
* Finance minister says will focus on strengthening rural, agriculture economy.
* Sets 10 trillion rupees to 11 trillion rupees credit for "agricultural activities".
* Minimum support price of all crops to be increased to at least 1.5 times of production cost.
* Export of agriculture commodities to be liberalised.
* To give 100 per cent tax deduction for the first five years to companies registered as farmer producer companies with a turnover of 1 billion rupees and above.
Gold
* To formulate a comprehensive gold policy.
* To revamp gold monetisation scheme.
Health/Pollution
* To provide 500,000 rupees per family annually for medical reimbursement under National Health Protection Scheme. Finance minister says the plan will protect 500 million poor people and will be world's largest health protection scheme.
* To implement special schemes for governments around Delhi to address air pollution.
* Removal of crop residue to be subsidized in order to tackle the problem of pollution due to burning of crop residue.