Protest in Kabul as Afghan officials press Pakistan over attacks 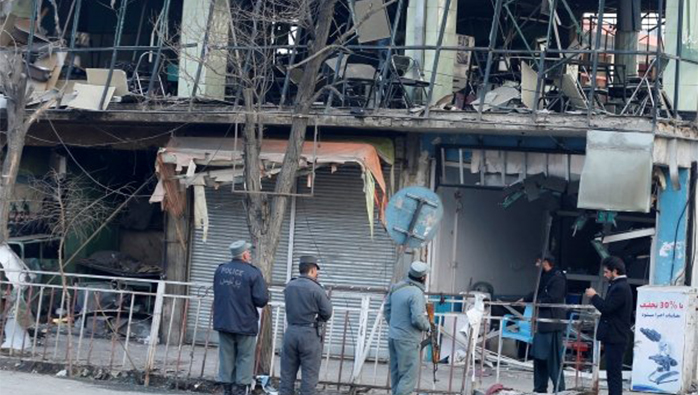 Kabul: Demonstrators protested outside the Pakistani embassy in Kabul on Thursday as senior Afghan officials said they had handed over evidence connecting insurgents based in Pakistan with a recent spate of attacks that killed well over 100 people.
The protest, in which dozens of people burnt flags and chanted, "Death to Pakistan", was not large, but it came during a period of heightened tension in the Afghan capital following two major attacks in the past two weeks.
On Thursday, Interior Minister Wais Barmak and Masooom Stanekzai, head of the NDS intelligence service, returned from a visit to Islamabad, where they had pressed Pakistani authorities to move against Taliban leaders based in the country.
"We provided Pakistan with documents about Taliban operating centres inside Pakistan and we expect Pakistan to act against them," Barmak told a news conference in Kabul.
However, he declined to provide details on the information provided, citing the need to keep operational intelligence secret while investigations continued.
A Pakistani security delegation is due to visit Kabul on Saturday to continue the discussion, which comes as the United States has cut off some aid to Pakistan over what it calls its failure to crack down on militants attacking in Afghanistan.
Afghanistan has long accused Pakistan of providing safe haven to Taliban and other insurgents, a charge Pakistan denies, pointing to the thousands of casualties it has suffered from militant violence over the years.
Last month, the Taliban claimed two major attacks in Kabul, one on the Intercontinental Hotel, which killed more than 30 people and a second that killed more than 100 people when an ambulance packed with explosives blew up on a crowded street.
The attacks in the heavily protected city centre fuelled fresh worries about the Western-backed government's ability to provide security and combat the Taliban insurgency.
On Thursday, the defence ministry issued a statement that dismissed as "exaggerated" a BBC report that the Taliban were operating in 70 per cent of Afghanistan and said the army was involved in 14 separate operations.
But despite a sharp rise in U.S. air strikes that commanders say have put heavy pressure on the Taliban and driven them back from major provincial centres, their ability to strike urban targets and undermine confidence in the government appears unaffected.