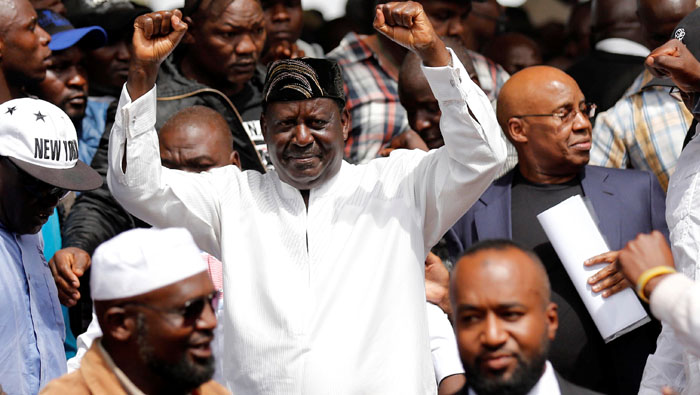 Nairobi: Three Kenyan television stations will remain off the air indefinitely as the government investigates the "swearing in" of opposition leader Raila Odinga, the interior minister said on Wednesday.
Independently owned Citizen TV and Radio, KTN and NTV were switched off on Tuesday after they transmitted live coverage of an opposition ceremony to "swear in" Odinga into office.
Fred Matiang'i, who is also the minister in charge of security, accused some elements in the media of facilitating the "illegal act", putting lives of thousands of Kenyans at risk.
"The government took a decision to shut down the concerned media houses, until further notice, as it launches a full investigation," he told a news conference.
Odinga, whose supporters say he is Kenya's legitimate leader and President Uhuru Kenyatta's election was neither free nor fair, took a symbolic presidential oath at the ceremony.
Matiang'i said the opposition event was an attempt to subvert and overthrow the legally constituted government, adding they were also investigating the "swearing in".
"The investigations will extend to co-conspirators and facilitators," he said, promising appropriate legal action against those found culpable. Earlier, executives in the media industry accused the government of keeping them in the dark over the switch-off of their broadcast stations. "There was no comment from the government when the action was taken, and there's been none since," said Wachira Waruru, managing director of Royal Media Services, which owns Citizen TV and Radio.
Attempts by Reuters to reach Kenya's Communications Authority for comment by telephone on Wednesday were unsuccessful.
"We're trying to reach out informally to government officials, but we are not getting any answers," Waruru said.
"Our business is advertising-based so we are making huge losses," he said, declining to give a figure.
The stations are considering filing a petition to the Kenyan courts in the hope of having their broadcasts restored by court order, he said.
"We are trying to resolve through dialogue, but if it doesn't work we will go to the courts," he said.
"It's shocking that the stations are still shut down," said Isaac Okero, president of the Law Society of Kenya.
"This sets a very worrying tone for the country and really reveals to us that the state's supposed commitment to constitutional order is very brittle if there at all."
On Tuesday security forces made no move to stop an opposition gathering in downtown Nairobi attended by more than 15,000 people, which authorities had said would be illegal.
But the government later declared the opposition "National Resistance Movement" a criminal group, paving the way for potential arrests.
On Monday, Linus Kaikai, chairman of the Kenya Editors’ Guild, said editors had been warned by authorities that they could be shut down if they covered the event.